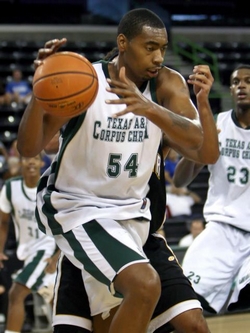 Joey Whelan
@DraftExpress
With a strong showing in the first round of the NCAA Tournament against Wisconsin last season, Chris Daniels managed to generate a little bit of buzz heading into this season. Daniels is listed at 70, 265 pounds, though the height may be a little generous. Regardless, he has good height and length for a center in the NBA, though the rest of his physical characteristics arent very overwhelming. Daniels is also 23 years old, and will turn 24 before the season ends, so hes a bit older than your average college senior.

On the offensive end, Daniels gets much of his scoring at the Southland conference level within five feet of the basket, where he can really cause damage when he puts his body to use. When hes trying, he has little trouble establishing good position, as hes bigger and stronger than most of the competition he faces. Daniels doesnt always fight hard for position, though, and his effort on and off the court has been questioned. When Daniels does get the ball low, he doesnt have a vast array of moves, but likes a mini jump hook that he has varying success with inside five feet. At times against weak competition, hes shown nice footwork on drop steps and quick spinning hooks, but at other times he hasnt looked very elegant with his feet, and his instincts also arent that great. Daniels also gets some of his scoring on easy shots around the basket, either when hes open or when hes just big enough to put the ball up right over his defender.

Daniels also has a formidable spot-up jumper that he likes to use from the mid-range, and has also shown flashes of three-point range with, hitting 16 of 42 attempts from behind the arc over the past two seasons. Daniels shot an impressive 81% from the free-throw line in 05-06, but strangely dipped to just 69% this past season.

On the defensive end, Daniels shows potential as a weak-side shot blocker with his length, but underwhelmed against weak competition this season, blocking just 1.6 shots per game. In terms of man-to-man defense, he gives up position in the post way too easily for someone his size, and can also be outmaneuvered there, not showing the greatest footwork or instincts. He doesnt like to step out on the perimeter either, making him a liability against jump-shooting big men. Daniels rebounding could also be better, especially given the competition he faced. He pulled down just 6.7 rebounds per game, though he only played 25.7 minutes.

Daniels game may have some notable flaws, but there is a lot to like about him. He has decent athleticism and mobility for a player his size, and he could become noticeably more agile if he lost some of his 265 pounds. Likely even more so than improving the fundamentals of his game, which he needs to do, Daniels main priority should be shedding some weight to add agility, quickness, and explosiveness to his game. With a better vertical leap and the ability to be quicker with his post moves, things he could gain from losing weight, he could significantly improve his effectiveness. Without doing these things, though, its tough to see him ever making a career in the NBA. But with his size, he should get a good deal of chances over the next few years if hes willing to put in the work, and he could start by showing improvement this season and at the pre-draft camps.
Read full article

Joey Whelan
@DraftExpress
Daniels did a good job showing off his skills on the offensive end early on the game. He stepped out and hit a mid-range jumper, something he would duplicate twice more over the course of the game. In the post, he seems to lack footwork and counter moves at this point in time, but he did hit a few jump hooks with his back to the basket. Daniels holds his position well in the post, but doesnt fight hard enough to get that post position. A few times during the game, he was able to dunk the ball easily after pinning his man down, but other times they couldnt get him the ball because he lacked position.

Defensively, Daniels displayed good potential as a shot blocker, something he really wasnt known for in the Southland Conference. He only averaged 1.5 blocks per game on the season, which is low considering that he only went up against 1 center during the conference season that could match his size. Against Wisconsin, he used his length well to disrupt the paint, and timed a number of his shot-blocks perfectly coming from the weak side. Physically, he has the length to be a good shot blocker, and he possesses a decent vertical leap as well. He must take better advantage of these physical attributes as well when it comes to rebounding, where his numbers are fairly underwhelming.

To take his game to the next level and solidify himself as a prospect, Daniels must become better with his footwork and touch on the low block. His effort on the court has been questioned at times this season, but his effort seemed consistent throughout against Wisconsin. Though he is listed at 7 feet tall, it was observed by one of the broadcasters that he looked an inch shorter than Jason Chappell, who is listed at 610. He is a good, but not great athlete, and has a nice frame, although he could certainly use some work on his conditioning to help him reach his full athletic potential.

Technically, Daniels is a senior, but he will have a year of college eligibility left. He sat his freshman season as a non-qualifier but he was given the chance to have a 5th season thanks to the progress he made towards a degree. Daniels is likely to test his stock at this point, but will need a strong performance at the pre-draft camp in order to give himself a good shot at working his way up draft boards this season. Otherwise, another season at A&M Corpus Christie would go a long way for the talented, but raw 7-footer.
Read full article