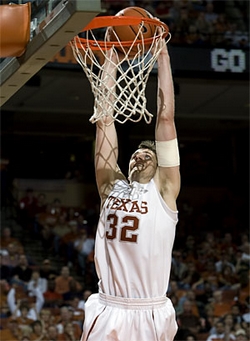 Joey Whelan
@DraftExpress
The departure of Kevin Durant to the NBA opened up plenty of scoring opportunities in Texas frontcourt, and it seems like Connor Atchley (as well as Damion James) ended up being the biggest benefactor, more than doubling his scoring output from his sophomore to junior seasons. The big man might not have as much long term upside as some of the other players on this list due to the fact that he will be 24 before the 2009 NBA draft rolls around, but still has considerable room for improvement before being labeled a finished product.

Atchley has legit size for an NBA big man, looking every bit of 610 (perhaps even taller) and a solid 230 pounds with plenty of room to grow. He is blessed with long arms and a great motor, exerting good effort every time he steps on the hardwood. Athletically, Atchley is a slightly above average leaper and runs the floor well, although his conditioning could use some improvement with him looking quite winded at times late in the game.

As far as intangibles are concerned, there isnt much more you could ask for. Atchley is a great student and did not have one single scholarship offer before Rick Barnes and co. offered him a full ride in the spring of 2003, and willingly redshirted his freshman campaign in 04-05. Making huge strides over the last few years both physically and skills wise, it is clear that the Houston native is a tireless worker who wants to get better every day.

Atchley does the bulk of his damage on the offensive end as a jump shooter, scoring via both spot up jumpers or working the pick and pop to perfection. He shoots a bit of a set shot, but has shown the ability to consistently stroke it beyond the collegiate three point line against players his own size or bigger. Connors jump-shooting (both mid-range and beyond the arc, although strictly with his feet set) accounted for more than half of his total offense, and he shot a sizzling 41.3% from the land of three. For his efforts he ranked 6th in the country amongst all draft prospects in points per possession. He did not garner an incredible amount of possessions, but was extremely efficient in the ones he used, as evidenced by the 54% he shot from the field, despite being essentially a jump-shooter and garbage man.

Adding in the ability to face-up on the perimeter and take his man off the dribble in a straight line would probably help Atchley become slightly more versatile. He would attempt this shot on rare occasion, usually to release a running hook that he attempts to be practicing, but his ball-handling skills and first step arent strong enough to make the dribble-drive a consistent part of his offense just yet.

Down low, Atchley has shown a developing right handed jump hook with no counter move whatsoever. Never using his left hand at all severely limits his productivity in the pivot, and it still appears hes quite raw when given one on one situations on the blocks. The big mans nice hands and soft touch allow him to catch and finish efficiently down low, which is an asset considering how well he moves off the ball, (particularly in pick and roll situations) and he has proven to be a decent passer when pressured with the ball in his hands. Atchley isnt what you would call an incredibly explosive big man, but he found a way to finish on an excellent 70.49% of his attempts around the basket according to Synergy Sports Technologys quantified report, often with a two-handed dunk. How much of that had to do with the quality of the point guard that was next to him is something well find out this upcoming season.

Arguably the top selling point on Atchley as a prospect is his ability on the defensive end. He is a very good shot blocker who is also able to alter a ton of shots, while staying out of foul trouble for the most part. Positionally speaking, he held his own ground against stronger post players such as Michael Beasley and Blake Griffin last season and showed good lateral quickness when those foes faced him up. On the downside, Connor tends to bite for ball fakes a little too much and isnt quite the rebounder youd like to see out of a big man prospect, averaging a little over 5 rebounds per game last season, and only 7.6 per-40--quite a poor mark.

Atchleys ability to shoot the ball from the perimeter at his size and potential on the defensive end are two NBA skills that will keep him firmly supplanted in the minds of NBA scouts, as he has all the makings of an excellent role player, minus the rebounding ability. His production and development throughout his final season at UT will determine whether he is able to be drafted in June or if he will be battling his way through training camp as an undrafted free agent.
Read full article