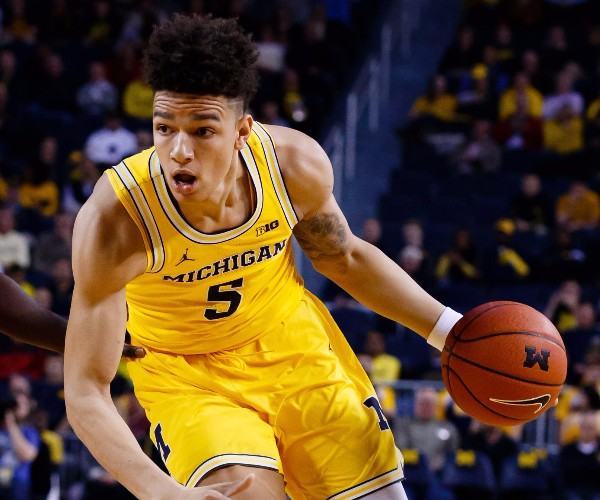 D.J. Wilson had a slow start to his Michigan career, as his freshman season was cut short after four games due to a knee injury. As a redshirt freshman, he failed to earn the trust of the coaching staff, only seeing six minutes per game. He took a big leap in his third year, becoming a full-time starter after two games, and peaked in Michigan's impressive postseason run, which included a Big Ten Tournament championship, followed by a Sweet Sixteen appearance where he averaged 17.4 points and 5.9 rebounds per 40 minutes in nine March games.

A late bloomer, Wilson was not a highly ranked recruit (RSCI #159 in 2014) after growing three inches late in high school. Going to high school in California, it's a bit of a coincidence he ended up at Michigan since his middle name is Jaylen, inspired by famed Michigan Fab Five player Jalen Rose.

It took Wilson some time to grow into his body, but he looked much more comfortable in his 6'10, 234 pound frame as a redshirt sophomore. He is agile and moves his feet well on the perimeter, and with his 7'3 wingspan complementing his size, he has elite physical tools for the type of big men NBA teams are searching for to stretch the floor.

Wilson displays versatility and skill as a perimeter threat, and is the type of player that can fit into modern NBA offenses as a power forward or center (particularly as his frame fills out). He has a nice shooting stroke, making 37% of his 3.8 three point attempts per 40 minutes. He is a confident shooter with a projectable stroke to NBA distance, and is able to catch and shoot from spot-up situations or pick and pop in ball screen situations.

He has a nice baseline of ball handling skills for a power forward, with an ability to create off the dribble which will be a beneficial skill when teams run him off the three point line. He's primarily a straight line driver to the rim, but he has some impressive footwork on the move to step past his opponent on the way to the rim. He wasn't a great passer on the move, but posted a positive assist to turnover ratio at 1.19 and did make some smart reads at times when he kept his head up.

Off the ball, Wilson uses his agility well and can get into space inside the arc off cuts or out of pick and roll situations. He isn't the quickest player in the open court, but is fluid enough to get down the floor for easy buckets when he is ahead of the play. He has good hands to make some tough catches and is able to put the ball on the ground, which helps him create good looks for himself, even with a defender in his face.

Around the basket, Wilson was an elite finisher by converting 73% of his 100 field goal attempts according to Synergy Sports Technology, which was eighth best among all D-1 players with at least that many attempts. He is quick off his feet and displayed exceptional touch and composure around the basket with the footwork needed to pivot past his defender and finish at the rim. Wilson will have to prove he can finish at a high level against NBA big men and has to become a tougher player in the paint to be an efficient player when he can't directly score. He shies away from contact frequently as he shot a paltry 1.6 free throw attempts per 40 minutes, lowest among all power forwards in our top 100. After growing up as a wing player, he's clearly more used to playing outside the arc and will need to improve his strength and toughness to be able to compete in the paint against NBA big men.

Showing little desire to throw his body around in the paint, he isn't a high level rebounder as he prefers to avoid contact. He averaged just 5.3 total rebounds per 40 minutes (3.8 defensive) which was second lowest among power forwards in our top 100, and lower than many point guards. His numbers were slightly suppressed because he was often away from the rim and his length and agility does allow him to have a wide rebounding radius which means he could improve as a rebounder at the next level, but he will need to become significantly tougher to fill that role.

Defensively, Wilson can be a versatile player if he fills out his frame which will allow him to play either the center spot or the power forward position alongside another big man. He is willing to switch onto any position and can move his feet to stay in front of quicker guards when he is in a proper stance. He doesn't project to be a dominant rim protector, but he can block some shots (2.0 per 40 minutes) with his length and timing while his quick feet allows him to close out on perimeter shots and contest jumpers.

That said, he isn't always in a proper stance to keep him light on his feet and he is prone to allow dribble penetration when caught flat-footed. He will also need to focus on increasing his off-ball awareness to react quicker as the play develops to be in proper position to help his teammates.

As a late bloomer with only one real season of experience under his belt, the 21 year old Wilson still has plenty of potential to grow into as he heads into the draft. It will be interesting to see how his frame develops as he matures, since he already possess the skill set of a stretch-4, but he needs to add toughness and competitiveness to not emerge as a one-dimensional player. With NBA teams continue to search for big men who can shoot, handle, pass and switch, Wilson is a strong first round pick candidate and should have plenty of chances to break into an NBA rotation.
Read full article

Wilson has been prone to following impressive two or three-game stretches with underwhelming performances, and he'll certainly be tested against a versatile, athletic Oregon team on Thursday. A big game would help answer some of the questions about Wilson's consistency, while continuing to boost the burgeoning draft stock that likely didn't seem all that realistic when he was an under recruited wing shooter coming off the bench at the AAU ranks.
Read full article

Jonathan Givony
@DraftExpress
The redshirt sophomore Wilson is a fascinating story in his own right, as told yesterday by Nicole Auerbach of USA Today, a late-blooming 6'11 athletic big man who blocks shots, makes 3-pointers and finishes impressively around the basket. Wilson couldn't get off the bench last year behind an uninspiring cast of big men, but has been an integral part of Michigan's success this season. His ability to man the paint defensively and protect the rim from the center position was integral in the first round win against Oklahoma State, especially with the space he creates offensively as a spot-up shooter and emphatic cutter, diver and rim-runner in transition. NBA scouts will be watching closely to see whether he can continue to impact the game on both ends of the floor the way he has at times for Michigan (particularly in the Big Ten Tournament) against an array of long and athletic Louisville big men who will test his skinny frame and inconsistent physicality and toughness.
Read full article