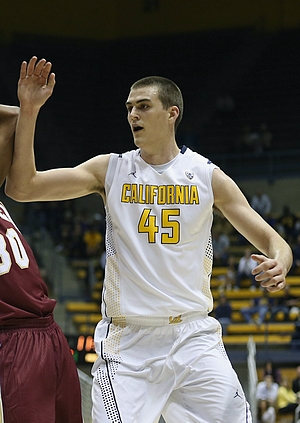 David Kravish has been an important part of Cal's lineup since the moment he arrived on campus in Berkley, starting nearly every game in three seasons while averaging 29 minutes per contest. Now entering his fourth and final year, it will be interesting to see whether he's able to progress from skinny, yet talented role-player into a possible NBA prospect.

Kravish's intrigue starts with his size, as he's now listed by the school as being 6-10, 240 pounds, and sports a solid wingspan. His frame is still on the lanky side but looks like it has room to grow as he continues to mature and fills out physically with age. And he's fairly mobile for a player his size, running the court well, being quick off his feet and showing solid quickness and coordination.

Kravish was a limited scorer as a junior, averaging just 14 points per-40 minutes, one of the lower rates among NBA prospect big men, partially a product of the minimal role he played offensively for Cal. He was very efficient with the touches he did get, though, posting a solid 55% 2-point percentage and shooting 74% from the free throw line.

Kravish saw a decent amount of his touches with his back to the basket for Cal, and despite his skinny frame, he was able to convert a solid 55% of his shots around the basket in post-up situations. Kravish has good fundamentals in the post to go along with very soft touch, as he's able to make turn-around jumpers and jump-hooks over either shoulder at a nice rate. He shows nice patience in the post and has a high release point on these moves, using the glass nicely and demonstrating solid scoring instincts that could bode well for his future as his frame continues to fill out. Lack of strength is currently a significant issue, as evidenced by how few fouls Kravish is able to draw both with his back to the basket, and in general.

Kravish also does a solid job playing without the ball, be it running the floor, cutting into open spaces, or finishing on the pick and rollthanks to his soft hands and solid mobility. He converted an excellent 67% of his attempts around the basket this past season, again a testament to his soft touch inside the paint.

Facing the basket, Kravish shows some potential, but is still more inconsistent than he should be considering how much of a role this part of his game will likely play in his future. He made 38% of his jump-shots this past season, looking fairly reliable from the mid-range area thanks to his solid shooting mechanics, and even knocking down a couple of 3-pointers. Extending his range out to the 3-point arc consistently would help his long-term prospects tremendously moving forward, as he's unlikely to play much of a role with his back to the basket against higher level competition due to his body type, and should try to transition to the power forward position as he gets older.

Kravish shows a nice feel for the game both on the perimeter and inside the post, making the extra pass willingly and unselfishly, and generally being a solid part of his team's offensive execution and ball-movement.

Defensively, Kravish shows nice timing, length and mobility as a rim-protector, averaging a 2.6 blocks per-40 minutes last season, third best in the Pac-12. He struggles badly in man to man situations inside the paint, though, as he currently lacks the lower body strength to keep opposing players from backing him down, as he's possibly missing a degree of toughness and physicality. Kravish is not a great rebounder either at this stage, pulling down just 9.5 boards per-40 minutes last season, possibly due to some of these same issues.

Kravish didn't do enough to distinguish himself as a bona fide draft prospect in his first three seasons at Cal with his sheer productivity, but he has some interesting tools at his disposal that could bode well for his future. With Cal losing two of their top contributors from last season in leading scorer Justin Cobbs and starting center Richard Solomon, as well as head coach Mike Montgomery to retirement, it will be interesting to see what Kravish can do to fill that void.
Read full article