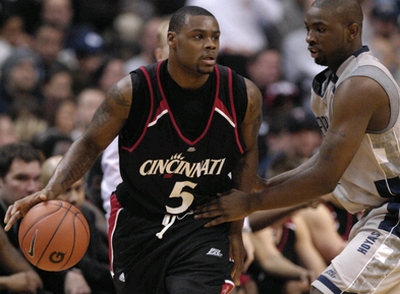 Joey Whelan
@DraftExpress
One of the top scorers in the conference last season at over 17 points per game, Deonta Vaughn played a huge role in the surprising 8-5 start Cincinnati managed to post in the Big East. Riddled by injuries after already lacking any kind of depth, the team ultimately ended up finishing 13-19 overall on the season, but managed to stay competitive in almost every game they played. The tough and aggressive mentality of their go-to guy had everything to do with this.

Vaughns physical tools are not going to be what gets him in the NBA. He is an undersized combo guard, listed at 6-1, but possibly an inch shorter. He has a very strong and stocky build, and is a good, but not incredible athlete. Once hampered by weight problems (one of the reasons apparently that Indiana decided to rescind his scholarship offer before he ended up committing to Cincinnati), Vaughn looks to be in good shape, and is fairly quick off the dribble, but not incredibly explosive getting up around the basket.

Skill-wise, Vaughn is one of the more complete guards youll find in the Big East, possessing phenomenal instincts for putting the ball in the basket, in a variety of ways. He is first and foremost an outstanding shooter, as evidenced by the near eight 3-pointers he attempts per game, of which he makes a terrific three on average (making him the 8th most prolific shooter amongst all returning college players in our database. 60% of his field goal attempts come from beyond the arc, but considering that he makes 40% of them, its hard to argue with that.

Vaughn has a clean, compact stroke featuring NBA range, and is absolutely lights out with his feet set (he makes 44% of his catch and shoot jumpers according to Synergy Sports Tech). He can also make shots off the dribble, but sees his accuracy drop significantly in the process (just 32%--SST). Watching his film and seeing how Cincinnatis offense operates, its hard not to feel that he was forced to shoulder an excessive amount of the offensive load last season, which very likely affected his shooting percentages, since the team had very few options beyond him.

More than just a shooter, though, Vaughn is also fairly effective creating his own shot and getting to the basket as well. He has excellent ball-handling skills with both hands, great strength, solid quickness, and the craftiness needed to get by his man. He gets to the free throw line at a pretty good rate, and converts just under 80% of his attempts once there. Despite standing just 6-1 at best, Vaughn finishes extremely well around the rimmaking a superb 66% of his shots in the immediate vicinity of the basket. His stocky frame allows him to take hits in the paint and finish strong regardless, and he seems to have terrific touch using the glass to finish with the utmost craftiness and creativity.

Although there is no question that Vaughn is a terrific scorer at the collegiate level, his point guard skills will be scrutinized heavily due to his average size. Vaughn clearly thinks shoot-first with the way he runs an offense, although he is capable of executing basic half-court sets and getting teammates involved. He looks most comfortable on the pick and roll, which allows him to rack up a decent amount (4.2 per game) of assists finding the open man off the dribble, but also makes him fairly turnover prone (3.2 per game.)

Vaughns shot-selection and overall decision making clearly need work, as he has a tendency to dribble with his head down at times and pull-up for some questionable shots. A lot of that has to do with his scoring mentality, but Cincinnati also needed him to be a little selfish in order to stay competitive in games. Finding a healthy mix between the two will be a huge key for him in his quest to show that he can play in the NBA.

The Bearcats were planning on moving Vaughn to the 2-guard spot this season, but will have to ultimately keep him on the ball due to the serious knee injury suffered by highly touted freshman point guard Cashmere Wright. That will probably benefit Vaughn in the short-term, although winning games in the incredibly competitive Big East will be very important for him to catch the eyes of NBA decision makers.

Defensively, Vaughn has some things going for him, but there will be some question marks raised here too. On one hand, he is a very competitive and aggressive player, and this translates to his play on this end of the floor toohe works very hard to stay in front of his man and contest shots (his strength helps out plenty here), and is not afraid to stick his nose in and take a charge. On the other, he is undersized compared to most NBA point guards and can surely only defend that position at the next level.

At the end of the day, Vaughn will get some looks from NBA teams, but there is only so much excitement a 6-1 combo guard can typically generate. If he plays his cards right, and catches a couple of breaks, it wouldnt be shocking to see him end up on a roster, but its just as likely that he ends up being a big-time player in Europe. The fact that he will turn 24 in the summer following his senior year probably wont work in his favor.
Read full article