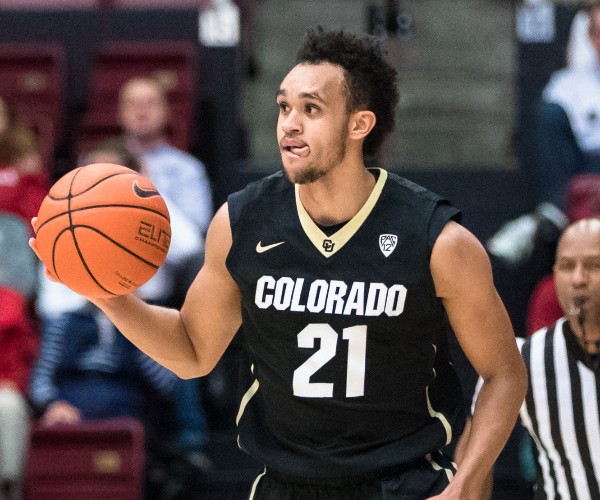 Derrick White is emerging as one of the best stories of the 2017 NBA Draft class, going from being entirely off the NBA radar after transferring from Division II, to earning first team All-Pac 12 honors, an invitation to the Portsmouth Invitational Tournament, and then a spot at the NBA Combine. His strong play in every setting he's participated in the past six months has helped him emerge as a candidate to the be the first senior selected in the 2017 NBA Draft, which would have been almost unfathomable a year ago considering his starting point.

Painfully under-recruited out of Legend High School (CO), White benefitted from a number of coincidences to even find his way onto a Division II roster, let alone NBA draft boards.  Standing around 6'0 as his prep career came to a close, White had little recruiting interest outside of a small non-scholarship culinary school in Denver, NAIA program Johnson & Wales.  As fate would have it, the coach at Johnson & Wales, Jeff Culver, was hired by Colorado-Colorado Springs (UCCS), a Division II program with an all-time .271 winning percentage at that point, coming through with a partial offer for White just months before he was set to graduate.  Yahoo! Sports's Jeff Eisenberg wrote a far more detailed account of White's improbable rise to prominence in Division II, let alone NBA scouting circles.

Despite White's modest beginnings, a post-high school growth spurt turned the undersized combo guard into an immediate impact player at UCCS, where White earned Rocky Mountain Athletic Conference Freshman of the Year honors, averaging 16.9 points per game to lead the Mountain Lions, who won only five games that season, in scoring.  White took a big step forward as a sophomore, leading the UCCS to 21 wins, while averaging 22.2 points, 6.3 rebounds, and 4.2 assists per game to earn All-American honors in Division II.  Garnering similar honors as a junior but making another significant leap on the floor, finishing the season ranked as the second most efficient volume scorer in all of Division II, according to Synergy Sports Technology, White averaged 25.8 points, 7.4 rebounds, 5.2 assists, 3.2 steals, and 2.1 blocks per game, putting together one of the most impressive statistical seasons in recent Division II history, before opting to make the jump to Division I in the hopes of solidifying his standing as a NBA prospect.

After redshirting last season, in accordance with NCAA rules, White was one of only 14 players in the NCAA this season to average 18 points, 4 rebounds, and 4 assists per game with Markelle Fultz, Frank Mason, and Dennis Smith being the only other players to accomplish that feat hailing from power conferences.

Officially measured at 6'4.5 in shoes with a 190-pound frame and a 6'7.5 wingspan, White has come a long way from his high school days physically.  Possessing excellent size for a combo guard, the 22-year old fifth year senior is also a solid, but not spectacular athlete.  He isn't freakishly quick or explosive, but plays with tremendous pace and is bouncier in space than one might expect given his style of play.

Functioning as Colorado's primary shot creator, White regularly enjoyed a significant size advantage over his defender last season.  With over a third of his possessions coming in pick and roll or isolation situations, White was regularly asked to make plays off the dribble, but also scored the ball prolifically in spot up situations, and as the focal point of the Buffalo's off screen sets.  Scoring 1.078 points per possession, scoring at an above average rate in virtually every conceivable situation, White was the seventh most efficient scorer in high major basketball last season, according to Synergy Sports Technology, among players using over 16 possessions per game.

An opportunistic scorer with a strong feel for the game, White isn't overly explosive with the ball in his hands, but is a patient playmaker whose size, shot making ability from all three levels, and knack for letting the game come to him made him very effective last season, despite the massive jump in quality of competition he faced.  Adept at using his body as a finisher, and his high vantage point as a passer, White is a poised, versatile offensive player who plays at different speeds effectively.

White's strong play starts with his solid jump shooting ability.  A massively improved perimeter threat over his five-year collegiate career, White was a bright spot for a Colorado team that struggled to make open looks all season.  Though he tends to fade away on many of his midrange jump shots, and doesn't get much elevation for his release, White gets the ball away quickly and flashes fine touch both off the catch and off the dribble, with range out past the college three-point line. Shooting 40% from beyond the arc, with those attempts split fairly evenly between pull-ups and catch and shoot jumpers, White figures to add value at the next level as a floor spacer who can also make the defense pay for going under ball screens on his best nights.

Far more than just a shooter, White is also a crafty scorer inside who converted 45% of his floaters and 62% of his finishing opportunities in the half court last season.  Though he doesn't play above the rim often, unless he has a head of steam, he's a very creative scorer around the basket who makes shots from difficult angles contorting his body around defenders or stopping short and dropping in floaters with soft touch.  Reading the defense well, White doesn't force many drives, but can struggle to convert when he does, especially when trying to finish in a crowd in situations where he can't maneuver his way to a clean look with his impressive footwork.  White may not be the most prolific slasher, a constant threat to turn the corner, or even the kind of guy who is going to make defenses pay for switching with his quickness, but his ability to attack closeouts and pick and choose his spots inside are a plus nonetheless.

As a passer, White shows impressive vision in the pick and roll, and benefits from his ability to make passes that smaller guards sometimes can't.  The Colorado native does a nice job keeping his dribble against hard hedges, but can also look a bit too casual against ball pressure, leading to turnovers against quicker, more aggressive defenders.  Dishing out 5.3 assists per 40 minutes pace adjusted, White isn't the most prolific distributor, but he makes the simple play with good timing, throws some terrific passes through tight windows on the move, and seems like a candidate to provide value as a secondary ball handler or as a backup point guard.

Defensively, White has good feet, but may lack the elite length, strength and quickness to put the clamps on the most explosive athletes he'll encounter at times.  He showed a knack for using his instincts to make plays in the passing lanes and even protect the rim last season, but also wasn't always as energetic as one would hope, struggling to contain dribble penetration, and appearing far too laid back at times.  White held his own against smaller players last season when he was dialed in, and could conceivably do the same at the next level, giving him some nice versatility to work with if he can find a way to rev up his motor on a more consistent basis.

Coming off strong showings at the Portsmouth Invitational Tournament and NBA Draft Combine, it isn't entirely out of the question that White completes his improbable journey from partial-scholarship Division II recruit to first round NBA draft pick.  He has a promising skill set for a rotation combo guard and his relative lack of high level experience gives him more upside than some senior prospects, which should earn him plenty of attention from teams picking in the middle of the 2017 NBA Draft.
Read full article

Julian Applebome
@jlapplebome
Colorado Guard Derrick White posted the second best three-quarter sprint time at 3.08 (97th percentile historically) and tied for the third best standing vertical leap at 35.5 (99th percentile historically).  The D2 transfer combo guard was a rather unheralded prospect until this season.  White measured 6'4.5 with shoes with a 6'7.5 wingspan which is very similar to the physical measurements of Chicago Bulls guard Jerian Grant, but his athletic testing results are very similar to those of Mike Conley's.
Read full article

Matt Williams
@DraftExpress
-Colorado senior Derrick White measured 6'3 without shoes, with a 191-pound frame and solid 6'7.5 wingspan giving him good size for a combo guard, similar to the dimensions of Jrue Holiday (6'3 ¼, 6'7, 199 pounds) for example.  White fared relatively well in the athletic testing posting average marks in the speed and agility testing, coming through with an impressive 34 inch no-step vertical leap, which would have been one of the top marks among guards at last year's NBA Combine.
Read full article