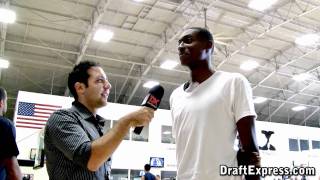 Arguably the most athletic player in all of high school basketball, Deuce Bello (#41 Scout, #43 Rivals, #34 ESPN) is a player who has steadily risen up the recruiting rankings over the past year.

Undersized for a wing player at 6-4, with an average frame and a long wingspan, Bello can elevate around the basket like few players can at any level of basketball. He is incredibly quick from end to end and has tremendous potential on both ends of the floor, even if he's still very far from being a complete player at this point in time.

Offensively, Bello is still a somewhat limited player in the half-court, although he's clearly made strides with his skill-level recently. Showing a very quick crossover and the ability to beat opponents with ease with his lightning quick first step, Bello is a highlight reel waiting to happen in the open floor. He will need to work on his advanced ball-handling skills to become the deadly half-court shot-creator his physical tools indicate he can down the road, though, as he struggles to operate as efficiently once the game slows down.

As a shooter, Bello sports a very slow and unattractive looking flat-footed release, being much more proficient shooting the ball off the dribble as opposed to with his feet set. He has limited range at this point in time, but is not afraid to take tough looks nevertheless, showing poor shot-selection and overall decision making at times.

Defensively, Bello has the ability to be an absolute force if he put his mind to it, something that clearly hasn't happened at this stage. He puts little to no effort in on this end of the floor, jogging back half-heartedly, not putting any work in off the ball, showing poor fundamentals, and refusing to box out his opponent on the glass.

His competitiveness leaves quite a bit to be desired, something that raises question marks about his ability his reach his full potential in the long-term. Bello's teams have always underachieved badly relative to their talent-level, and looking at the body language he displays, the lack of effort he puts in, and the often selfish manner in which he operates at times, it's not difficult to pinpoint why.

A player who could still go many different ways with his development, Bello is a couple of minor mentality adjustments away from being considered one of the most talented prospects in his class. It's quite possible that maturity is all he's lacking right now. We'll surely be revisiting his progress in the future.
Read full article