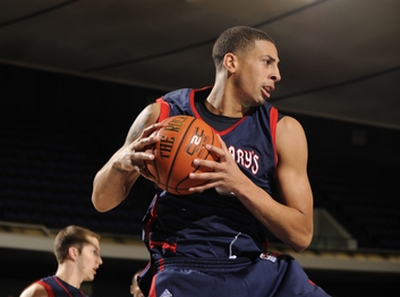 Richard Walker
@DraftExpress
Diamon Simpson set himself apart today with a strong showing in the Showcases second game. In a narrow loss to the Maine Red Claws, Simpson was often the best players on the floor for the L.A. Defenders. Displaying a good motor and a knack for being in the right place at the right time on both ends, he finished the game with 22 points and 14 boards.

An undersized big man who can put the ball on the floor to attack the rim, Simpson isnt an elite athlete, but he is willing to initiate contact, uses his narrow frame well, and has a nice wingspan. Assertive and decisive when attacking the rim, hes a capable finisher despite lacking a degree of vertical explosiveness. Showing good timing when ducking underneath when his teammates get into the lane, Simpsons off-ball movement and dribble drives afforded him a number of easy scoring chances today. Though he didnt appear as active defensively, where he seems content to stay at home and deny penetration, his length and instincts on the glass were apparent. Likely lacking the size and strength to translate his productivity to the NBA level, Simpson is certainly one of the more effective big men in the NBADL.
Read full article

Joseph Treutlein
@DraftExpress
After an outstanding start to the Portsmouth Invitational in his first game, leading one scout in attendance to compare him to Chuck Hayes, Diamon Simpson trailed off over the remaining games, having some of his weaknesses exposed. Still, Simpson is definitely someone we need to take a more extended look at, given his production in college and seeing how he measured in at an impressive 68.5 with a 70.75 wingspan.

Physically, Diamon Simpson is big enough to play the PF position in the NBA, as many undersized 4s have shown over the past few years. In addition to his solid length, Simmons brings very good mobility and coordination to the table, being a smooth athlete, albeit not a terribly strong or explosive one.

Looking at his offensive game, Simpson is not incredibly skilled, being more of a hustle player who does most of his damage finishing around the basket, either off of cuts, by getting out in transition, or crashing the offensive boards. Simpsons persistence and motor in general are outstanding, as he gets involved in a lot of plays and is very active in the painted area. While Simpson finished pretty well at the NCAA level, he has some problems projecting to the NBA here, as he isnt able to power up in a crowd very well, not possessing great vertical explosiveness. Against tougher competition, both in the season and here at Portsmouth, this led to a lot of blocked shots and missed around the basket, as Simpson doesnt really have the finesse game to step back and compensate for his lack of explosive power in side.

With his post game, Simpson shows very nice footwork and mobility, being able to maneuver adeptly around the paint and back his man down or turn to face in for short baseline drives. However, he lacks range on his moves, not showing much touch as he gets farther away from the basket, not really possessing a reliable hook shot or turnaround jumper. With his baseline drives, Simpson has decent enough ball-handling for straight-line drives and a good enough first step to take his man often, but his lack of explosiveness around the rim leads to some tough shot attempts, which only pose to get worse projecting to the next level.

Simpsons jump shot is also not very formidable, as he has wildly inconsistent mechanics, with a release point thats all over the map and a shooting motion that varies from an overhead release to a line drive with a few other things in between. His accuracy is reflective of his inconsistent mechanics, and it carries over to the free-throw line where he shoots a poor 58%.

Defensively, Simpson shows some promise, having a good motor and making a lot of plays, as evidenced by his 1.7 steals and 1.6 blocks per game on the season, however hes prone to gambling at times. As a man defender, Simpsons instincts are questionable on the perimeter, and his fundamentals arent always great, though he appears to have the lateral quickness to stick with power forwards, but not small forwards. In the post, Simpson has very strong fundamentals, keeping his hands up and forcing tough shots well, however hes prone to being backed down and beat with quick moves at the NCAA level, something that projects as more of a problem in the NBA.

Looking forward, Simpson would appear to be fighting an uphill battle to be drafted, given his underdeveloped skill set and lack of standout athleticism or size, but he should get some opportunities to make a roster, and a team may fall in love with his motor. Still, to find a long-term place in the league, Simpson will undoubtedly have to put in a lot of hard work polishing his skills, but if he is unable to, he should be able to have quite a successful career overseas.
Read full article

Joseph Treutlein
@DraftExpress
The most active player on the floor for the first two games here in Portsmouth, Diamon Simpson is holding nothing back in showing NBA teams why he thinks he belongs. The undersized power forward filled up the hustle categories yesterday, pulling in an outstanding 15 rebounds while picking up 4 steals and a handful more deflections. Simpson was a menace on the defensive end, playing pressure defense both on his man and off the ball, defending past the three-point line on most possessions. Showing very good mobility and reflexes, Simpson gave the opposition plenty of problems getting into their sets, and really impressed with his non-stop effort, especially seeing he played a game-high 35 minutes.

On the glass, Simpson was equally menacing, getting his hands on every ball he could, showing good timing and pursuit abilities. On the offensive glass, Simpson showed some trouble powering up to finish once he got the ball, not being the most explosive athlete. His persistence paid off here, but he'll need to work on either his finesse or power-finishing to translate this ability. Working on his touch around the rim, his lower body strength and leaping ability should be among his priorities.

Other than his hustle plays, Simpson didn't show much else here, not being a great shooter or having much ball-handling ability, which is not a surprise considering his role player status. A number of NBA executives we spoke with mentioned how impressed they were with his play, and one went as far as to compare him to another Portsmouth alumniChuck Hayes.
Read full article