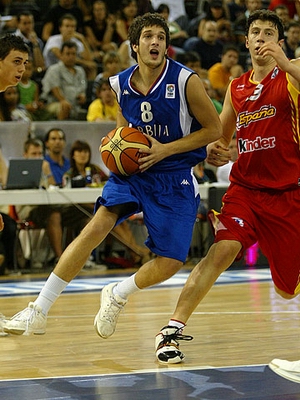 Luis Fernández
@DraftExpress
The guy who has probably left the best impression this season is Dusan Katnic. The Serbian point guard, already one of the top backcourt players in the past U-18 European Championships, paid a visit to the Vilagarcia Basket Cup with his team Mega Aqua Monta some weeks ago, and exhibited his high-quality finesse game. Were talking about a pretty skilled playmaker, poised and elegant. Hes not greatly explosive or athletic, but he gets things done relying on fundamentals, on his footwork, driving ability, court vision or knowledge of the game. He can shoot with range, he can sneak between rivals, he easily finds his teammates either from the perimeter or off the dribble, he shows a very solid off hand, he looks effortless playing the game (sometimes a bit too much indeed). You can easily feel the talent there, although his defense left to be desired, and anyway his potential is not off the charts.
Read full article

Luis Fernández
@DraftExpress
Out of the three Serbians doubling up on youth tournaments this summer, Katnic was the one taking the largest step up from what he had shown at the U-19 World Championship, indeed emerging as one of the most intriguing players seen in the whole competition. He is a solid playmaker who shows a nice feel for the game and notable coolness running the point. Hes a patient guy who doesnt rush things and shows good decision making, recognizing the opportunities that arise within the offense. Hes pretty big at 6-4, displaying a nice long body that still has room to physically develop, while enjoying unspectacular, but solid athleticism.

Somehow a cross between a distributing and a scoring point, at this point, hes a bit more of a slasher than a shooter. He enjoys very solid ball-handling skills, knowing how to properly protect the dribble, while he displays a good first step to attack the basket, especially going right, and excellent footwork. Besides, hes smart finding good options to split defenses. Hes a high-percentage type player who will pass the ball if he doesnt find a clear scoring option, so its very usual to see him driving all the way to the basket, attracting the opposing defense, and dishing the ball to an open teammate. Still, he can also finish himself with layups even against opposition, knowing how to protect the ball. Hes also pretty effective in pick-and-roll plays, as he always represents a slashing menace and does a good job feeding the rolling big man. If not a great shooter, he keeps the defenses honest with a very consistent perimeter stroke out to the three-point line and even delivered off the dribble, although his percentages suffer if hes contested.

A solid defender, Katnic displays nice lateral quickness and takes advantage of his length to keep his opponents under control and come up with regular steals. All in all, the adjective solid comes up again and again when talking about his game. Hes a heady and steady guy, surely talented, not too much in love with his own abilities, not very spectacular, but who usually delivers and with the makings of a very good point guard for Europe, if he keeps working hard, but also enough potential to keep both eyes on him as far as the draft is concerned.
Read full article

Luis Fernández
@DraftExpress
His generation teammate Dusan Katnic showed some flashes of potential, emerging as a reliable back-up point guard for the Serbian team, sticking to the basics while displaying a bit of everything, whether dribbling, slashing, shooting or passing the ball. He's a 6-4 playmaker with solid quickness and a promising body who shows some poise running the point, while he contributed to the Serbian defensive effort.
Read full article