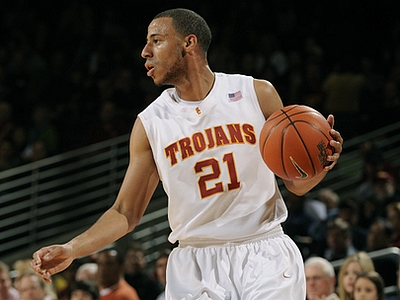 After initially looking like a long-shot to even qualify for the NCAA tournament, USC won the Pac-10 Tournament and got by Boston College in the First Round before falling in a close game to eventual National Championship Runners Up, Michigan State. This season, under new head coach Kevin ONeill and following a number of significant losses and offseason drama, the Trojans fortunes rests on the shoulders of senior wing, Dwight Lewis. After three years of steady improvement in Los Angeles, Lewis must take a big step forward, proving himself as a true first option and a leader in the locker room.

Standing 65, Lewis has average size for his position with a good frame and a solid wingspan. He is just a decent athlete, not likely to blow you away with his vertical leap or quickness, but he usually plays within his limitations on both ends of the floor. From a physical standpoint, Lewiss NBA future is somewhat uncertain, as he has neither standout size nor athleticism to play on the wing at the next level.

On the offensive end, Lewis was as a very potent scorer for Southern California at times last season, but the volatility of point guard Daniel Hackett and the late-season emergence of DeMar DeRozan made it difficult for him to be the teams primary offensive option with his current skill-set.

Lewis improved tremendously from beyond the arc, making 37.9% of his shots while taking 4.4 attempts per game. These are both career highs and looking at video, he has improved his form, showing a very fluid release and far more confidence when he receives the ball with space. It looks as though he can develop into a very solid spot-up shooter at the next level. He does appear to struggle though when not given enough time and space to get his shot off.

Elsewhere on the offensive end, little has changed. Lewis is still primarily a slash-and-shoot player, not showing the ball handling abilities or creativity at this stage necessary to develop an effective mid-range game or emerge as a great shot-creator. He still shows flashes, mainly when he pulls up for a fifteen-foot baseline jumper, but his average physical tools, he must continue to polish this part of his game.

As a slasher, there is no denying the fact that working on his ball-handling abilities would help him significantly, especially given his average first step. He also needs to overcome the tunnel vision that he showed at times last season, driving recklessly into double teams and shot blocking big men instead of deferring to open teammates. Similarly, his touch around the basket is not good and severely limits his effectiveness inside of the arc. This inefficiency around the basket, combined with his average explosiveness and lack of awareness of opposing defenses, is evidenced in his dismal 41.6% two-point field goal percentage, an unacceptable rate for an NBA prospect. Lewis should look to his slashing game more often this season, however, and aim to increase his 3.7 free throw attempts per game, not to mention his efficiency around the basket.

Lewis was a standout defender on a very good defensive team last year, though he will likely run into some trouble at the next level. As we have said before, he is a hard worker and able to cover multiple perimeter positions at the college level. As a man-to-man defender, he still shows the ability to harass his man while communicating with his teammates and maintaining solid court awareness. At just 65 with average athleticism, he will have trouble guarding some of the bigger and more physical wings at the next level, not to mention the fact that he simply will not be able to contain NBA point guards. Effort, however, is the key and Lewis can continue to work hard on the defensive end, scouts will take notice.

Next season presents Lewis with a tremendous opportunity. He will be playing in a new system under Kevin ONeill, but he will be the leader, top scorer, and defensive anchor from day one. At this point, however, he is just an average prospect in almost every single area, which does not bode well for his potential at the next level. Similarly, playing alongside a young and inexperienced point guard wont be easy, but if Lewis can turn into the potent scorer he was at times last season and continue to expand his game in the process, scouts will take notice.
Read full article

Joey Whelan
@DraftExpress
Coming off a successful sophomore season, Lewis enters the year with the opportunity to play a larger role this year for the Trojans, trying to help replace the production of shooting guard O.J. Mayo, alongside talented freshman Demar DeRozan. The unexpected transfer of point guard Angelo Johnson will leave the bulk of the playmaking duties for USC in the hands of Daniel Hackett, leaving plenty of scoring opportunities for Lewis on the wing. From what we could see last year, Lewis is unlikely to shy away from the added responsibilities, as hes a confident player with solid all-around scoring instincts.

Lewis has average size for an NBA shooting guard candidate at 65, although he does have a nice frame and a decent wingspan. Not a freakish athlete, he does have solid quickness and the willingness to make plays. Knowing his limitations, he seems to do the best of maximizing the talents that he has.

The main selling point that Dwight brings to the table as a prospect is his ability to defend, even though he doesnt have outstanding size. He does an excellent job of fighting through screens and containing penetration, often asked to guard the other teams best wing player during the season. Lewis doesnt force a ton of turnovers, but his man to man defense is amongst the best as far as wings in the Pac-10 are concerned.

Not what you could call a prolific scorer at this stage of his career, Lewis is regardless not a one-dimensional player, looking equally comfortable putting the ball on the floor as he is shooting jumpers. He does a decent job as a catch and shoot player, quite capable of knocking down the deep jumper despite his poor shooting mechanics. His shot is fairly slow to develop and he cocks the ball too far behind his head to get a consistent release point, but his size allows him to get his shot off against most wing prospects, often to mixed results.

The junior does a very nice job of getting his hands ready and finding himself in the right spots, making him quite available to playmakers looking to pass the ball. He has nice touch, but will almost certainly have to improve his mechanics if hes to reach his potential as a shooter and improve his all-around appeal as a prospect. Right now he needs more time and space to get his shot off effectively than he will be afforded against high-level defenses, due to his slow release. As evidence, he hit 45% of his open spot-up jumpers last season according to Synergy Sports Technologys quantified report, compared to just 19% of his contested looks.

Not just a shooter, Lewis has shown pretty decent skills slashing to the rim, although those opportunities were few and far between last season playing with ball dominant guards. His high basketball IQ enables him to make proper reads coming off of screens and allows him to free himself up when closely guarded. When going to the rim, he shows off a solid first step, nice body control and some crafty moves to elude defenders, as well as better ball handling skills then most college shooting guards at this stage in their development.

Still, there is obviously quite a bit of room for development here too. Most noticeable is the fact that he clearly favors driving left. His first step is obviously slower going towards his right and his ability to finish at the rim also goes down when he heads this way. Opposing teams will quickly pick up on this and work to force him out of his comfort zone, so its important that he improves his versatility with the ball.

The Louisiana native has also shown issues with shot selection in the past, seemingly forcing bad shots in instances where he hasnt touched the ball for a while. His confidence level didnt always match his offensive polish at times last year, particularly in some key moments of the NCAA tournament for example, even if it was admirable to see him doing his best to relieve the bottleneck congestion that often plagued USCs stagnant half-court offense. Lewis tends to over penetrate at times, take contested shots from the perimeter, and really struggles to find the open man when cut off going towards the basket, as well.

As a junior, Lewis will need to take his play to another level if he hopes to firmly implant himself on the NBA radar, even if hes obviously a four-year prospect. Teams love players with the ability to defend, but he will have to show that he can be a credible threat on the offensive end (particularly as a shooter) if he hopes to eventually play in the NBA. With the abundance of youth that the Trojans will have though, there will be a plethora of opportunity for him to enhance his production in 08-09.
Read full article