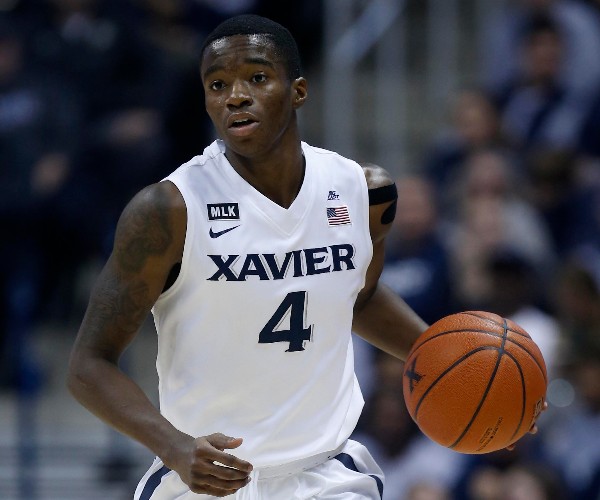 Edmond Sumner's redshirt sophomore season was cut short after he tore his ACL against St. John's, causing him to miss 17 games over the final two months. This comes after he was redshirted his freshman season after just six games after he was shut down to due to knee tendinitis.

With Sumner facing a long layoff to rehab his knee after his latest injury, he made the decision to continue his rehab as a professional with the possibility of a lost collegiate season in front of him. He was also facing shoulder surgery, due to an injury (reportedly a partially torn labrum) suffered in early January against Villanova, which he could have played through and finished the season with, but also would have required sitting out an extended period and probably contributed to his decision to leave Xavier.

Listed at 6'5.5 with a 6'8 wingspan, Sumner has always been a highly impressive athlete in terms of size, length, quickness and explosiveness, possessing elite-level physical tools, even among lottery prospects. He can race down the floor in the open court and is a quick twitch player in the half-court who can affect the game with his physical tools. His ability to regain his full level of athleticism will be very important in his ability to carve out a niche at the NBA level, especially considering some of his limitations as a shooter, finisher and decision maker.

Using his quick first step and ability to attack the rim, Sumner can slash to the rim off the dribble, where he converts at a rate of 53% according to Synergy Sports Technology. He has no trouble playing above the rim when he penetrates, but isn't a crafty finisher at the rim, lacking a degree of touch, and can get a little out of control at times, which hurts his ability to finish efficiently. The one area where Sumner must improve as a driver is with his ball-handling skills as he struggles to break down the defense with his loose handle. With more space in NBA offenses, he will have more room to use his quickness to slash into the lane, but will need to develop more advanced dribbling moves to get past defenders who will be up to the challenge of staying in front of him.

Sumner improved his ability to take contact this season, being more willing to challenge the defense at the rim, as he got to the line 7.8 times per 40 minutes, [url=about:blank most among point guards in our top 100. He shot 73% from the line while in college, a number scouts will likely want to see rise moving forward.

Sumner is not a great shooter from anywhere on the court in fact, which shows up in his three point percentage (28% for his career) and his total jump shots, as he made only 25% of his 62 overall attempts last season according to Synergy Sports Technology. He lacks touch on his jump shots and sprays the ball all over the rim with his inconsistent mechanics. Teams like to sag off him from the perimeter, daring him to shoot, and he will need to make some major strides in his mechanics and touch to become a more confident shooter so that he has the space to play to his strengths as a dribble drive guard.

While Sumner has balanced scoring and passing well, averaging 6.0 assists per 40 minutes, his decision making as a point guard can improve. Becoming more comfortable creating out of the pick and roll will be big for his development, as he learns to be patient and read the floor coming off ball screens to make the right decision as he penetrates. He has the vision to see over the top of the defense with his size, but he will need to become a more refined passer as he struggles with his accuracy while on the move. His 17.6% turnover percentage is on the high side, ranking second worst among point guards currently projected to get drafted.

While he was a phenomenal athlete before his injury, Sumner's skill-set hasn't yet caught up to his physical tools and after just 58 collegiate games, the 21 year old doesn't possess the same level of on-court experience relative to other players his age. His offensive game isn't fully refined and coming off substantial knee and shoulder injuries, he will likely need time to develop his point guard skills to lead an offense at the next level.

Sumner's physical tools give him a great deal of defensive potential as well, but his overall impact level isn't that high at this point in his career. He will need to become stronger to develop into a more physical defender, as has a tendency to shy away from contact on this side of the floor. He can be a step late to react to his man, especially off the ball, which can leave him trailing the play and giving up space in the half court.

When he is locked in on the ball, he can pressure his man well with his lateral quickness and wingspan to force contested field goal attempts. He also rebounds well for a guard as he tracks down 4.6 defensive rebounds per 40 minutes. His size could eventually allow him to become a versatile defender by being able to guard either backcourt position, but he will need to bring a more consistent level of toughness and intensity to become a more reliable defender.

Sumner will not participate in the majority of the pre-draft process and teams will gather the most information on him from his interviews and physicals. He will also likely miss a part of next season, as he recovers from his ACL and shoulder injuries, and the team that drafts him will be doing so with an eye on the future, as getting him healthy and rehabbed will take precedent over the inevitable skill development he'll require coming into the league. Sumner's size and athleticism will still make him an enticing prospect in the second round depending on the status of his medical examinations, and if a team believes he will be able to fully recapture his explosiveness, he could even get some looks at the end of the first round.
Read full article

Mike Schmitz
@Mike_Schmitz
Mike Schmitz kicks off our coverage of the top NBA prospects in the Big East with a video scouting report of the #1 prospect in the conference, Xavier's Edmond Sumner.

Jonathan Givony
@DraftExpress
While scouts are there, they'll also take a look at the progression of Xavier freshman Edmond Sumner, a tall, athletic and extremely talented point guard who will certainly be drawing interest in coming years. His matchup with Big Sky First-Team All-Conference point guard Jeremy Senglin will go a long way in deciding who wins this game.
Read full article