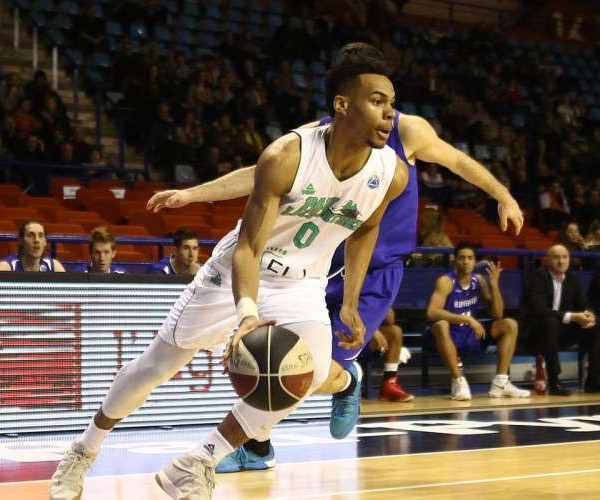 Elie Okobo played well for a French team that finished a disappointing 13th at the U20s, barely staving off relegation by defeating Finland late. At 6'2, Okobo is somewhat stuck between guard positions, as he is much more of a scorer than a distributor, but is definitely undersized for the shooting guard position, and does not possess tremendous explosiveness to compensate.

Despite his just decent physical tools, Okobo scored prolifically in Finland, finishing third overall in points per game at 18.9, despite playing up a year on the competition. Okobo scored it in a variety of ways, using his burst and change of speed to get into the paint, while also exceling on the perimeter where he converted an impressive 18 of 42 from behind the arc. Okobo can take and make tough shots, but he often settles for contested dribble jumpers that he can't yet hit at an efficient rate. He has the ability to get by his defender in one on one situations, but can struggle finishing against length, especially going to his right, and will throw up some tough shots when he should kick it out once the defense has collapsed on him. He shows flashes of point guard skills, making the occasional nice play out of the pick and roll, or pass on the move, but he looked more focused on scoring the ball than setting up his teammates.

Okobo no doubt has the ability to score the ball, but given his size he'll have to develop more at the point guard position. He has some pro experience, at the French Pro A level, but mainly in the Espoirs league, and that is where he will be next season with Pau-Lacq-Orthez.
Read full article