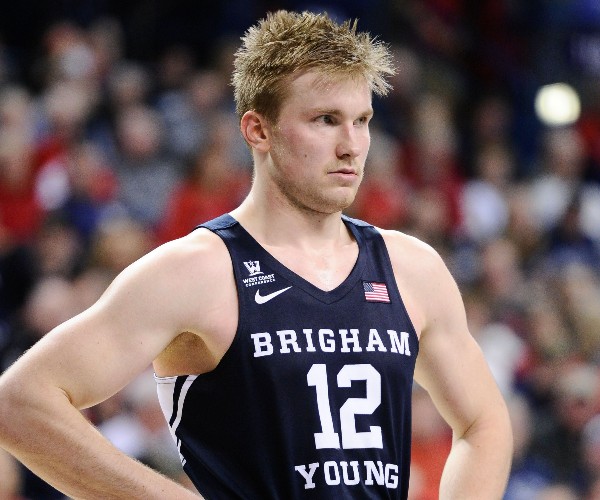 Josh Riddell
@Joshua_Riddell
After averaging a double double as a freshman in 2013-14, Eric Mika took two years off from competitive basketball to fulfill his Latter Day Saints mission. Returning for his redshirt sophomore season, Mika was one of the most productive big men in the country, averaging 28.4 points and 12.8 rebounds per 40 minutes while posting a 30.6 PER. Already 22 years old, Mika decided to capitalize on his strong season and begin his professional career.

Mika is slightly undersized as a center, as he measured at a hair under 6'10 with a below-average 6'10 wingspan at the NBA Combine. He will also need to get stronger, after weighing just 233 pounds, as the two years off seemed to have slowed his strength progression. He isn't the most athletic player, so he will need to be able to be a physical presence in the paint to make an impact and filling out his frame is a necessity to do so against NBA big men.

At this point in his career, Mika isn't the most skilled offensive player, but he makes up for it with a relentless work ethic and never-ending motor. He has shown some agility and quickness which has helped him get easy buckets, either through hard rim runs in transition or being active in the half-court, by moving into passing lanes around the basket to finish at the rim with impressive touch. He has a good feel for the game, which helps him be productive, as he can read the floor and cut into open space for dump-off passes around the basket.

This feel for the game is also shown in his 2.3 assists per 40 minutes, third most among centers in our top 100. As the game speeds up at the next level, he'll have to demonstrate he can continue to make his presence known with his basketball IQ, until his skill and strength-level improves.

Mika is a tireless offensive rebounder, and he finished with 4.3 per 40 minutes, fourth among all players in our top-100. While he can track down loose balls, he may not be an automatic finisher against NBA size when he doesn't have a lane for a putback dunk, and has to bring the ball down. He is best jumping off two feet, but he doesn't have a quick second jump and with his lack of size and length, he can struggle to finish when surrounded at the rim.

One of his biggest areas for improvement will be his footwork and ability to confidently put the ball on the ground once or twice to shed his defender and get a clean look at the rim. His post moves are slow to develop and he wasn't capable of carving out space with a power dribble with his back to the basket or when facing the basket after catching the ball outside the restricted area. He'll have to be able to score with a defender in front of him as he can struggle to finish over length.

With his agility, he should be much more of a pick and roll threat than a post-up scorer at the next level. He can get to the rim quickly in a straight line and is a lob threat when he has a free path to the rim. He showed some ability to step out to fifteen feet in pick and pop situations, but left many of his jump shots short (converting 41% of his small sample of 38 jump shots logged by Synergy Sports Technology) and will need to improve his form to become a more consistent shooter.

There is some potential for Mika to develop into a shooter, as he shot 76.3% from the free throw line last season. He did so on 12.1 attempts per 40 minutes, most among all players in our top 100. If he can translate his success on his free throws to his half-court jump shot, teams will be able to more easily fit him into NBA offenses and he will be more versatile than just a post-up player or cutter from the baseline.

Defensively, Mika brings the same level of activity that he shows offensively, indicating he can be a contributor at the next level despite his lack of elite measurables and athleticism. He pulled in 8.5 defensive rebounds per 40 minutes and is not afraid to throw his weight around to grab loose balls. This skill will be valuable for him moving forward as teams are always on the lookout for big men with a desire to crash the glass.

Mika has also shown strong timing as a shotblocker and was one of the best rim protectors despite his lack of length, as he averaged 2.6 per 40 minutes, fifth among all players in our top 100. He showed great off ball awareness to rotate over at the correct time to block shots at the basket and is also capable of blocking jump shots on the perimeter as well. Even still, he will need to prove how capable of a rim protector he will be at the next level as he doesn't have the same level of length or explosiveness of more traditional shot blockers.

While teams will certainly value his ability to rebound and block shots at the college level, there are still questions about who Mika can guard on a regular basis at the next level. He is slightly undersized to guard the interior full time and while he has solid lateral quickness, he doesn't look comfortable defending the perimeter and may not be able to stay in front of stretch big men off the dribble. He will have to find his niche as an individual defender while maintaining his energy on the glass to reach his ceiling as a defensive prospect.

NBA teams will certainly be interested in Mika after seeing his impressive production after taking two years away from competition. He may need a few additional years of seasoning to refine his offensive skill set and get stronger, but with his energy and eagerness to rebound, teams will continue to monitor his progression to see if he can round out his game to fill the roles NBA teams are looking for in their big men.
Read full article

The 6'10 sophomore out of Alpine Utah put together one his best games of the season on a big stage vs a Gonzaga team that was previously undefeated and ranked #1 in the country.

The 22-year old sophomore originally played his freshman season in 2013-14 before taking off two years to complete his Mormon mission. Since returning to BYU, Mika has put up massive numbers in WCC play, where he currently leads the conference in rebounds and is second in points.

At 6'10 Mika is somewhat undersized at the 5 spot where he spends most of his time. He doesn't have exceptional length or athletic ability, but does possess a high motor, is very physical, and has shown a developing skill set on the offensive end. While jump shooting hasn't been a primary part of his offensive arsenal, he showed comfort stepping out on jumpers out to the 3-point line vs. Gonzaga and forced them to defend him on the perimeter.

Mika does not shy away from contact and does a good job initiating contact on face up drives and post ups on the block. He is currently attempting 12.2 free throw attempts per 40 minutes, and got to the line 13 times vs Gonzaga.

Mika displayed his motor on the glass coming up with 11 rebounds, while creating several second chance opportunities on the offensive boards.

Defensively, Mika is currently averaging 2.8 blocks per 40, and showed his timing and instincts protecting the rim as a weak side shot blocker. While he has shown promise as a rim protector, his lack of ideal size and length is evident when he is forced to defend on the block, particularly in this game where he struggled giving up ground and defending the bigger Karnowski around the rim.

Mika is having a very strong sophomore year and is one of the top players to monitor in the WCC.

Strengths:
-Good size
-Excellent frame. Very developed upper and lower body
-Solid length
-Very good athlete. Runs floor well. Plays above the rim with ease
-Can make a turnaround jumper in the post
-Uses fakes in the post. Gets defender up in the air
-Soft touch around the basket
-Can make a mid-range jumper
-Active on offensive glass

Outlook: Big man with a strong frame and solid athleticism. Not incredibly polished offensively, but shows some budding skills that can be harnessed into consistent production. Will reportedly play one year at BYU before leaving for his two year LDS mission.
Read full article