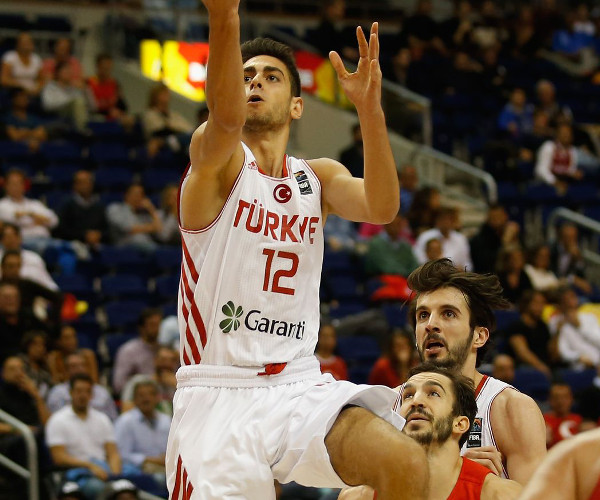 A player we covered in significant detail earlier this season, Furkan Korkmaz's season ended in disappointment as Anadolu Efes fell to Fenerbahce Ulker in the Turkish League finals and failed to advance past the top-16 round of the Euroleague. The immense pressure, and ultimately turmoil, surrounding the teamthey parted ways with legendary Serbian coach Dusan Ivkovic in late April, caused his minutes to decrease marginally, and contributed to his stock stagnating among NBA scouts. He surprised many by electing to keep his name in the draft at the June 13th deadline, as his camp had told some NBA teams he is looking for a promise in the lottery in order to stay in, which he ultimately did not receive.

Averaging 4.3 points over 11.5 minutes per game against some of the top competition in the world outside of the NBA, the 18-year-old shooting guard didn't have another outburst like he did when he scored 25 points in 27 minutes against Turk Telekom Ankara, but had his moments filling his relatively minor role down the stretch, reinforcing much of what scouts already knew about him.


One of just seven players under the age of 19 to see more than garbage time minutes in the Euroleague this season along with Luka Doncic, Dzanan Musa, Dragan Bender, Lovro Mazalin, Vassilis Charalampopoulos, and Borisa Simanic, Korkmaz has been one of the more productive teenagers in the Europe's top competition each of the last two seasons. The tall, skilled wing shot the ball well both off the catch and off the dribble this season, helping Jon Diebler and Dario Saric spread the floor from the wing for the likes of Jayson Granger and Thomas Heurtel at the guard spots and Derrick Brown, Bryant Dunston, and Alex Tyus up front on a deep, talented Anadolu Efes team.

Doing most of his damage in spot up situations, Korkmaz may lack strength and a degree of creativity off the dribble at the moment, but he has an obvious NBA skill in his ability to hit shots from the perimeter, where he posts impressive percentages overall and runs particularly hot at times. He's also a strong passer with an excellent feel for the game, contributing to his team's ball-movement with his court vision and showing some ability to create offense out of the pick and roll and closeout situations in different settings.

One of the more explosive scorers in FIBA Europe junior competition in recent years (career 25 points per-40, 56% TS%) the NBA team drafting Korkmaz will hope that he can offer some value as a roleplayer early on and potentially translate more of his scoring arsenal to the NBA game as his body fills out.

Possessing just average length for his size, a frame that is fairly narrow, more fluidity than explosiveness, and limitations defensively that kept him off the floor for extended stretches this season, there's some question as to just how much more Korkmaz's game will round out and what more he'd be able to bring to the table beyond his size, instincts, and terrific shooting ability in the long term.

He hasn't been able to break out of the one-dimensional role he's been pigeon-holed into at the senior level in Europe, and it remains to be seen if he'll be able to do so in the NBA, and how long that might take him.

Only turning 19 around a month after draft day, the young guard will have plenty of time to answer those questions. He figures to come off the board in the mid to late first round, which could cause some difficulties to pay off his onerous two million dollar buyout, but it's been rumored that that number may be negotiable ultimately depending on where he lands. He has been telling NBA teams that his goal is to come to the States as soon as possible and not be stashed in Turkey, which may discourage some teams with multiple picks from electing to pick him.

If that is the case, Korkmaz will join Enes Kanter, Ersan Ilyasova, and Omer Asik as active Turkish players in the NBA, and could become the first non-big man from his home country to play in the NBA since Ibrahim Kutluay joined the SuperSonics playing 12 minutes in the 2004-205 season in the middle of his career throughout Europe (unless Cedi Osman beats him to it). Korkmaz represents the first player in a new wave from the Mediterranean nation whose league has been of the most improved in terms of quality of competition in all of Europe over the last decade.
Read full article

Jonathan Givony
@DraftExpress
DraftExpress sat down with Turkish wing Furkan Korkmaz to discuss a variety of topics from his style of play to his plans for the 2016 NBA Draft.

More from Korkmaz on the Vertical, including an article on his strengths, weaknesses and progress, and footage from the Turkish league dunk contest.

Strengths:
-Solid size for a SG at 6-6
-Very explosive vertically. Can't always show it in the half-court, but has some impressive bounce, which he sometimes unleashes in transition situations
-Has nice fluidity and mobility
-Outstanding shooter. 45% for 3 at the U19s. 42% in the Euroleague/Turkish league this season
-Great natural touch on his jumper. Can throw the ball in the basket from difficult angles
-Excellent shooter with feet set. Developing shooter off the dribble
-Very unselfish player, sometimes to a fault. Plays the right way.
-Very creative passer. Makes the extra pass. Can drive and dish. Doesn't force the issue at all.
-Can beat his man off the dribble in a straight line with a quick first step. Has great footwork and timing on his drives
-Very intelligent cutting off the ball.
-Throws in floaters with soft touch
-Has great anticipation skills getting in passing lanes. Career 3.4 steals per-40 in national team competition. Sniffs out steals with his terrific feel for game
-Looks like a pretty humble and hard-working guy

Weaknesses:
-Frame is very immature. Will it ever fill out in a substantial way? Body looks pretty much the same as it did two years ago
-Average ball-handler at this stage. Doesn't bend his knees and get very low with his dribble. Struggles to create space to operate in the half-court on his own
-Doesn't finish very well in traffic. Lacks strength, but also some toughness
-Struggles to score effectively inside the arc. Tosses up floaters in the lane instead of driving all the way to the rim
-Average defender at best. Doesn't sit down on defense. Struggles to bend his knees. Lacks a degree of physicality. Needs to improve his frame and intensity level

Outlook: Tremendous scorer at the youth levels. Averaging 27 points per-40 in a Turkish national team uniform in his career thus far, with a sparkling 61% TS%. Played up a year (doesn't turn 18 until July) in Crete and was still one of the best scorers at the tournament. Named to All-Tournament team. Surprised everyone by carving out a solid niche for Euroleague powerhouse Anadolu Efes and playing 12 minute per game at the age of 17. Had some very memorable moments despite his youth. Will look to expand that this upcoming season in his first draft-eligible year. Told us in an interview in Crete that he has significant interest in playing the NBA, possibly as early as next year.
Read full article

DraftExpress
@DraftExpress
An interview with Turkish shooting guard Furkan Korkmaz at the 2015 FIBA U19 World Championship in Crete.-Georgios Papagiannis Interview
-Tyler Dorsey Interview(Video may not load with Internet Explorer. Use Chrome or Firefox)
Read full article