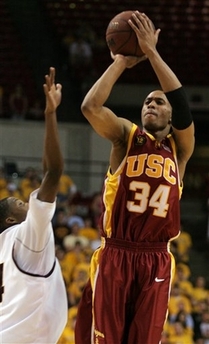 Jonathan Givony
@DraftExpress
Lost in the shuffle a bit between the terrific play of Nick Young and Taj Gibson has been the emergence of Gabe Pruitt as a legitimate point guard for USC. Pruitt did an excellent job helping his team building up a big lead on North Carolina in the first 28 minutes of the game, but like all of his teammates, could not pick up the slack once the Tar Heel locomotive got rolling with 12 minutes to go.

Pruitt is far from a finished product at this point, still needing to improve his ability to control tempo and become more aggressive at slashing to the rim and getting to the free throw line. His shot selection could also stand to improve, and hes not quite as consistent as youd hope on a game to game basis. Pruitt is expected to test the waters this year and will get his share of looks in the late first round due to his upside, but in our estimation, hed be well served to use his senior year to continue to develop his all-around game.
Read full article

Joey Whelan
@DraftExpress
has always been known as a player with great talent, but that talent was overshadowed this year too often by inconsistent and out of control play this year. Against Texas, he played a very impressive game in terms of handling the lead guard role, something that helps his stock tremendously when considering that that will be his natural position at the next level.

Pruitt used his quickness well to get into the paint, and showed the ability to break down the defense and find the open man on more than one occasion. In the past, he has always struggled with attempting the spectacular play over the simple on, but he kept things under control against Texas, working the ball around slowly in the offense, and pushing the ball in transition only when there was a numbers advantage. Texas tried to pressure Pruitt in the backcourt on numerous occasions, but he passed it off to the open man when trapped rather than trying to dribble through it.

Pruitt didnt score the ball as proficiently as he has in the past from the field, but he has plenty going for him in this area. From behind the three point line, he can knock down the open jumper when set, and he has a crossover that allows him to create separation against anybody. At the basket, acrobatic finishes are not a rarity for Pruitt, who has an explosive vertical leap and great body control when he commits to attacking the basket, something that he at times shies away from in favor of settling from long-range jumpers.

Defensively, Pruitt did a great job staying in front of D.J. Augustin in this game, using his size, length and quickness to bother him into possibly his worst performance of the season. He was even matched up with Kevin Durant at times, and showed excellent determination trying to contain him, even though he was giving up almost half a foot in size to him. This is another area that he has been highly inconsistent in throughout his time at USC, so it was encouraging to see him put this kind of effort in.

Pruitt has the talent and athleticism to play in the NBA, but he will need to continue to polish his point guard skills. If he chooses to return for next season, he could benefit greatly from sharing ball handling duties with OJ Mayo. He has a major test coming for him next week against the speed and depth of North Carolinas backcourt, so USC will need him at his absolute best to have a chance to advance.
Read full article

Jonathan Watters
@DraftExpress
One prospect long overdue for an update is USC combo guard Gabe Pruitt, now a junior. Pruitt won over plenty of suitors after displaying all sorts of lead guard potential as a freshman, but hasnt exactly followed through on those expectations for a variety of reasons. His production is down this season because he missed nearly the entire non-conference slate due to academic difficulties, and took a while to get up to speed with the rest of the Pac-10 already in midseason form. After averaging 16.9 ppg and shooting 38% from 3-point land as a sophomore, Pruitt has slipped to 11.6 and 33% this year.

The poor shooting percentages may appear to be alarming, since Pruitts textbook jumper is going to be his main NBA weapon, but a little context must be added before any conclusions are rushed. The junior has never been good at creating his own offense under any sort of pressure, whether it be driving the ball to the basket or hitting a contested jumper. It is when he gets his feet set and has time to get comfortable that the shots start dropping. He continues to hit spot-up jumpers at a high clip, but with the tragic death of teammate Ryan Francis in the offseason, has ended playing more of a creators role this season. Instead of Francis creating an abundance of good looks for Pruitt to cash in on, Pruitt has found himself handling the ball and running the offense in support of freshman Daniel Hackett.

This leaves Pruitts offensive game very much a mixed bag at the moment. With the way he elevates at 64, he should be able to stretch defenses at any level. But the problems with consistency remain, and he still looks quite unpolished in his forays to the basket. His athleticism and length allow him to get around NCAA-level defenders fairly easily, but he doesnt make good use of the space he creates for himself and is a terrible finisher.

As far as the ball-handlers role goes, Pruitt has done a better job. His Ast/TO ratio has nearly doubled, and he no longer looks like a fish out of water directing the offense. This is a good sign, and with all the length, athleticism, and defensive potential he displays, there is still the possibility that Pruitt could someday make a serviceable Bobby Jackson/Leandro Barbosa/Devin Harris-type secondary ball-handler for a team attempting to run and stretch defenses. However, Pruitt hasnt developed quickly enough in the past two years, and would need to pick up the pace dramatically in terms of toughness and all-around scoring ability to crack the first round in 2008. Of course, OJ Mayo is headed west this fall and we are hearing that this could cause Pruitt to enter the draft this spring. Aside from a testing of the waters, it doesnt appear like this would be the right course of action for Gabe Pruitt at the moment.
Read full article

The other very promising sophomore PG prospect in the conference, Pruitt has the raw tools of your prototypical NBA point guard. Hes athletic enough to get by people off of the dribble, has a beautiful outside shooting stroke, makes good decisions, and has ideal height. Pruitt is also in a situation tailor-made for him to show off for the NBA scouts, as he has just one upperclassman teammate. Pruitt still has a lot to learn, but has as much upside as any player in the Pac-10. It could be a breakthrough year.
Read full article