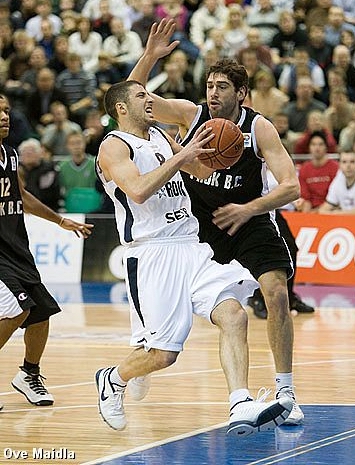 Luis Fernández
@DraftExpress
Tsintsadze is another product of the CSKA juniors (he played there with the likes of Shabalkin or Kurbanov), and a typical presence in the Georgian youth teams; indeed, we did cover his performance at the U-18 European Junior Championship in 2004. From what we saw then, he seems to have improved in some areas of his game, but still has ways to go. He still looks like a promising prospect with very good tools even for pro competition, thanks to his 6-4 well-built body (although still a bit skinny) and nice athleticism. Tsintsadzes one-on-one skills remain pretty effective. He takes advantage of nice handles and notable quickness to beat defenders, while he easily finds the open man on the court. He seems to have settled his game down a little bit, as he used to get out of control too often. Now he is more patient, trying not to force the issue, and not looking for the unnecessary flashy assist. He still gets out of control every once in a while, but it isn't as big of an issue as it once was. He has never been a good shooter, and still lacks consistency from the long range area, while his mechanics are not the most solid ones. Besides, hes too much of a static player off the ball, just waiting for his teammats to feed him. However, he actively helps on the defensive glass.

The level of competition Tsintsadze faces is not the best in the continent, but its a move in the right direction. He doesnt look to be much of a serious draft candidate at this point but we shouldnt rule it out if he continues to blossom in the next year and a half.
Read full article

Luis Fernández
@DraftExpress
Although he had a bad tournament, the Georgian showed some promising skills. George is a 6'4 point guard with nice athleticism, which includes excellent quickness and quite a good vertical leap. While he is a creative playmaker, he wasn't able to organize the mess that was his team throughout the tournament. Tsintsadze was one of the major reasons for that mess because he is not a ball distributor and does not seem to control the tempo of the game. He shared the point guard duties, playing some combo guard, but I still think he was most responsible for his team's direction (or lack thereof).

Tsintsadze's greatest asset at point guard rests in his ability to create off the dribble. He flourishes playing one on one. He usually puts the ball on the floor and then tries to beat his match-up, creating more space by means of lightning-quick changes of direction and excellent body fakes. His handles are very good. He is a bit of a ball hog, but that command of the ball is the way he usually creates for his teammates, by driving and dishing, showing good court vision in those situations. His decisions are questionable. He risks too much looking for the flashy pass that will get him the assist, but he lacks adequate control over his passes to allow himself this luxury. To put things in perspective, George Tsintsadze is no Sergio Rodríguez. His shooting displays good mechanics, although he is rather streaky. He can be an intense defender and has the physical tools to be reliable, but he looks too much for the steal, risking his defensive position.

George needs to work on his game, but keep an eye on him. He has nice potential, even for the NBA, but he has a long road ahead of him.
Read full article