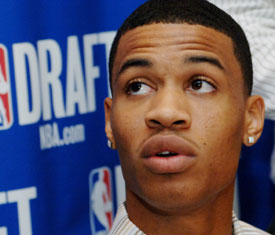 Matt Williams
@DraftExpress
Green came through with a simply spectacular shooting performance today. He found himself matched up against Luke Jackson in the third quarter, and while Jackson actually played decent defense, Green simply couldnt miss. No one was closing Green out hard, and he was able to use his leaping ability to get his shot off whenever he wanted. His release point seemed to vary at times, but it didnt matter. Even when Jackson had a hand almost on his face, Green wasnt fazed. He was draining pull ups off of crossovers and catch and shoot jumpers from NBA range routinely. While this is just another example of how good Green can be as a scorer, hes still looking for a long-term home. His age and potential should be enough to get him a job, especially if he keeps this up.
Read full article

Mike Schmidt
@DraftExpress
The young shooting guard had a very good game today, and while he didnt show great decision making, he did come up with some big plays. He knocked down two consecutive three pointers, and while he was consistent from range today, thats not a dependable part of his game yet. He did a tremendous job beating his man off the dribble and getting to the line, but he took some questionable shots when he was forced to change directions. Green did a great job on the glass, showcasing the leaping ability that has made him famous. Hes capable of being a very good rebounder for a small forward, and could really set himself apart if he showed more dedication to that part of the game. Green played well today, but needs to do so on a regular basis to earn himself an NBA contract,
Read full article

Matt Williams
@DraftExpress
This game served as an opportunity for Green to showcase his perimeter skills. While they are largely undeveloped Green showed off both his strengths and weaknesses over the course of the contest. He opened the game with a picture perfect catch and shoot three, followed by a handful of ill-advised shots from the outside that were either well defended or off balance. Green remains an athletic freak with a lot to work onnot much different than what people said about him 3 years ago. Whether or not he gets to do that with an NBA contract may come down to how well he performs in whatever training camp he lands in.
Read full article

Rodger Bohn
@DraftExpress
Gerald had a solid, but not spectacular practice. He did a little but of everything, but nothing extraordinarily well. He knocked down a few threes, had one nice pass that I saw off of a drive, and did a pretty good job on defense. One NBA scout I spoke with had this to say in regards to Green: The kid is a sure fire lottery pick if he declares. He is oozing with potential.
Read full article