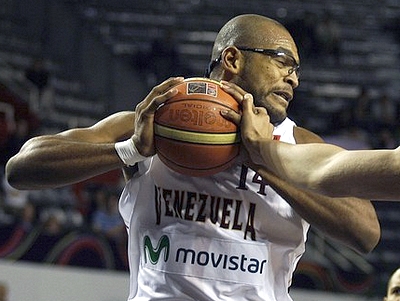 Last time we checked in on Greg Echenique nearly four years ago, he and Samardo Samuels had joined forces to form one of the most dominant prep frontcourts in the country. Since then, Echenique finished his senior year ranked in the RSCI top-100, spent one and a half seasons at Rutgers, missed significant action because of surgery resulting from a detached retina, transferred out of the Big East to Creighton, and competed for the Venezuelan National Team at the FIBA Americas Championship. Starting his junior season, Echenique is one of the more imposing big men in mid-major basketball and one of the top NBA prospects in the Missouri Valley conference.

Standing 6'8 with a powerfully built frame, Echenique remains the same extremely physical interior presence we described in our last report, only now he's imposing his will on college big men. He doesn't have a big wingspan, which, at 6'8, renders him undersized from a NBA perspective, but the St. Benedict's product has re-shaped his 265-pound frame in recent years, looking significantly more trim that he did as a freshman and appearing a bit more explosive because of it.

Despite his perceived weight loss, Echenique is as strong as ever. He may not be the quickest or most explosive big man, and certainly isn't going to beat anyone up the floor in transition, but he can carve out position in the post, keep defenders on his back, and finish plays at the rim with dunks when he can gather himself.

It is Echenique's ability to create space for himself in the paint that makes him an effective player as one of his team's secondary options offensively. Able to establish deep position in the post and back his matchup down, Echenique creates and converts a fair amount of easy scoring opportunities for himself by virtue of his powerful lower body and fairly soft touch at the rim. According to Synergy Sports Technology, he connects on nearly 59% of his post-up shot attempts, which ranks among the top marks in the entire country. Though he isn't quite as effective when he is forced to operate from the mid-post and is not going to simply out-jump anyone, Echenique is a rugged back to the basket threat who typically relies on his ability to keep his man on his hip, shoot baby hooks with either hand, or utilize an occasional counter move to score.

Though Echenique's physical assertiveness is a big reason that he's effective when he can get a shot up on the block one-on-one, it also renders him fairly turnover prone. Making moves right in the teeth of the defense, Echenique gets tied up on occasion, gets stripped when he brings the ball down for even just a moment, and gets called for a charge every now and again. Moving forward, it will be important for him to do a better job dealing with double teams and be a bit more discerning when making his initial move off the catch.

Apart from his post scoring ability, virtually all of the center's other touches come in finishing situations, where Echenique appears to be at his best at this juncture. Attacking the rim immediately regardless of whether he's getting the ball while cutting to the rim or crashing the offensive glass, the junior looks to dunk the ball in traffic when he sees a crease or initiate contact as a finisher. Converting 65% of his attempts at the rim and getting to the line almost as frequently as any player in our database per-field goal attempt, Echenique's efficiency in catch-and-finish situations at the NCAA level is simply outstanding.

A terrific area rebounder and overall very active big man, Echenique is fairly limited on the offensive end away from the basket, essentially functioning as a pure center at the college level. He proves to be a half-way decent free throw shooter, converting his trips to the line at a solid 70% clip, but attempted just five total jump shots last season. His form is not terribly smooth, but appears to have some potential, and the implications of the development of his jump shot on his ability to play the power forward position long-term at the NBA level is worth keeping an eye on.

Defensively, Echenique's physical and aggressive mentality works in his favor. His lack of lateral quickness hurts him out on the perimeter and against quicker big men when they face up in the post, but he fights tirelessly for position on the block, boxes out well, and works extremely hard pursuing loose balls and contesting shots. Echenique needs to improve his fundamentals to mask his lack of speed on the perimeter, but his activity level make him a good shot blocker and overall defender in the college game despite his lack of size.

Considering that Echenique is a 6'8 center in the NCAA right now, the development of his defensive and offensive ability away from the rim will be the sticking point in what he'll bring to the table at the next level. He has the mentality scouts like to see in an undersized big man and experience playing against high-level competition on the international level. With two more full seasons of eligibility thanks to the medical redshirt he received in his final year at Rutgers, Echenique still has plenty of time to continue developing, and is a player whose prospects we'll surely visit in the future.
Read full article

Joey Whelan
@DraftExpress
Along with teammate Samardo Samuels, Greg Echenique is part of what may be the top high school frontcourt in the country; so it was no surprise when both players registered double-doubles in St. Benedicts win over New York powerhouse Rice.

While the Louisville-bound Samuels had a first half that could be best described as non-descript, Echenique did everything he could to keep St. Benedicts in the game. The junior picked up the bulk of his points in the first half thanks to his headstrong style of play inside. Echenique is listed at 240 pounds, but from what we saw he easily looks like he could be even more than that. This massive frame makes him very tough to guard one-on-one in the post at this level. With that said, though, like they did to Samuels, Rice did a good job of swarming Echenique in the first half when he got touches on the block. Though he faired a little better than Samuels did initially, Echenique appeared to have some trouble passing out of these double-team situations.

Echenique showed some signs of a developing post game, but at this point generally seems to rely on overpowering defenders to get his baskets in the paint. He showed us a strong drop step while mixing in the occasional turn-around jump shot in the lane when forced out of position. The majority of the time, though, Echenique tends to put his head down and muscle his way to the rim. He isnt tremendously explosive, and lacks great height, so he could have trouble at the collegiate level against taller, longer post players.

One area where Echenique consistently made his presence felt was on the glass. The big man is a tenacious rebounder, having a wide frame that is hard to get around when boxed out, and he has a surprisingly quick second jump for a player his size. Echenique has above average length and is able to make plays on a lot of balls out of his area, something that will help tremendously at the collegiate level.

At this point, Echenique doesnt show much ability at all to play beyond eight feet from the basket. His ball handling skills are suspect even when making moves with his back to the basket, so it is safe to assume he isnt a major threat to drive and attack the basket. We didnt get a chance to see Echenique attempt any shots from anywhere outside the general vicinity of the basket, so we cant really judge his abilities as a shooter. He did however at times lack touch around the basket which in part played a role in his rebound numbers for the game.

Defensively, Echenique doesnt do anything at a particularly high level, but he isnt a defensive liability either. His frame makes him hard to back down on the block, but he needs to do a better job of fronting opponents. While he is very aggressive rebounding the basketball, he needs to be more aggressive as a shot blocker. Often times when players would drive the lane Echenique would simply stand with his arms straight up. While this will ensure that he doesnt get called for very many fouls, it did allow some of the more athletic players to elevate over or around him much more easily than they would have otherwise. Echenique also doesnt appear to possess tremendous quickness, and as a result struggles when forced to guard perimeter players.

There is certainly plenty of room for improvement by Echenique in his remaining time at the prep level. While he certainly shows flashes of potential to be a solid interior player at the collegiate level, right now a lot of his success appears to stem from being bigger and stronger than many of the players he encounters. His effort and hustle on the glass will certainly win him points with any coach, but he needs to become an impact defender more than three feet from the basket. Echenique also needs to develop his post game more in order to handle playing against players that will be able to match up with him physically. There is no doubt he is more of a center than a power forward at this point, although his height makes him undersized really for either position. Developing the ability to step out and knock down the occasional mid-range jump shot would go a long way to helping his stock in the future.
Read full article

Jonathan Givony
@DraftExpress
Samardo Samuels partner in crime in the post, junior big man Greg Echenique (#37 Scout, #45 Rivals) did a good job establishing himself as a legitimate prospect in his own right for the collegiate level. Hes a big, strong kid with a good frame, nice hands, an excellent wingspan, and a very nice feel for the game for a player his age.

Echenique is mostly a rebounder and finisher for this team, two things he can do very well. Hes a bit undersized and not incredibly explosive, but he runs the floor hard, competes extremely well, and shows good awareness on defense. His hands, strength and timing allow him to make a big impact on the glass, particularly on the offensive end. Hes a bit raw offensively as youd expect for someone his age, but he looks like he should be able to develop into a capable back to the basket scoring threat down the road for whichever high-major program manages to reel him in. He plays calm and under control, but is pretty aggressive when needed. Its not hard to see why some very good teams like him, since he has all the makings of a very nice 4-year role player who will play hard and smart and do the dirty work inside.
Read full article