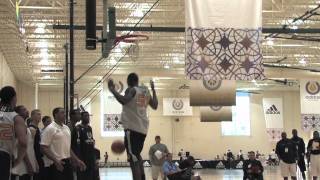 Joey Whelan
@DraftExpress
Despite experiencing an up and down freshman season marred with inconsistency, Ibrahima Thomas comes into this upcoming campaign with some solid playing time and experience underneath his belt, which is exactly what he needed considering his background.

Showing great size at 6-11, with an outstanding wingspan, Thomas is always going to catch peoples attention when he first steps foot on the court. He is about 20-30 pounds from his optimal weight, though, and is not what you would call a very fluid athlete at this point, looking a bit clumsy and uncoordinated the way raw African prospects at times do. His hands are just average and he doesnt have very much to speak of in the ways of his footwork around the basket.

Whats interesting about Thomas is that he shows an intriguing skill-level facing the basket, being capable of knocking down shots with a pretty nice looking stroke, good enough to hit 11 3-pointers in his freshman season, at an inconsistent 32% clip. This is a nice asset for a player his size to have, but he should not fall in love with it, as he tended to do at times rushing up bad shots immediately once he caught the ball on the perimeter, which led to some very awkward misses in which he did not even draw iron.

As the season progressed, Thomas did a better job of contributing to Oklahoma State, in small doses. He showed some sparks of potential posting up aggressively and knocking down short hook shots and turn-around jumpers inside. Nothing incredible, but enough to show that he is making progress and is willing to use his size and touch to get his team high percentage shots. His timing, decision making skills and all-around offensive polish obviously have a long ways to go, but there may be some room for optimism based on the early results. He showed a pretty decent knack for crashing the offensive glass as well.

On the negative side, Thomas showed very little in the ways of passing ability, turning the ball over five times for every assist he dished out, and only shot a mediocre 58% from the free throw line. He wasnt much of a shot-blocking presence at all (just 1.1 per 40 minutes), and was incredibly foul prone, averaging 7.1 fouls per-40 on the season. He needs to work on his body to maximize as much of his athleticism as he can (hes fairly average in this regard), as well as his hands to make him at least somewhat of a consistent threat to catch the ball and finish inside.

Thomas cant be viewed as anything less than a 4-year prospect at this point in time until he manages to show otherwise, but he will get some looks regardless because of his size, length and budding perimeter skills. The type of work ethic he displays will likely determine how far he is able to make it in professional basketball. Hes playing catch-up right now and has a lot of ground to make up.
Read full article

Jonathan Givony
@DraftExpress
Thomas showed some rare skills for a 7-footer tonight, but his very concerning set of weaknesses kept him glued to the bench too much to give us more than just a brief glimpse. The skinny African project drained two 3-pointers during one stretch, and then followed that up by faking a shot, putting the ball on the floor, and finishing with a floater. That was the extent of what he showed tonight, at least on the offensive end. On the other end of the floor he looked lost for the most part, showing poor timing defensively and not making much of an effort if at all to hit the glass. Hes too skinny, raw and soft to be able to guard the 6-7 big guys he faces up with at this level, and his coach quickly tired of him once Stoneridge blew a 19 point half-time lead with him in the game. He was sent to the bench and did not return for the rest of the game.
Read full article

Jonathan Givony
@DraftExpress
Ibrahima Thomas, who just signed with Oklahoma State, is the most skilled of the three seven footers, but also the least developed physically. He has is a legitimate threat from the perimeter at 70 tall, being fully capable of knocking down a quick release three point shot at any moment. He displayed a silky smooth turn around jumper out of the post, and was able to use his length and athleticism to block 3 shots, and alter countless more. Ibrahima did not show any resemblence of a low post game however, and made it clear to everyone in attendance that he is surely not a center. Oklahoma State will surely have to find a burly, big man to but next to Thomas in order to make up for the Senegal natives lack of inside toughness.
Read full article