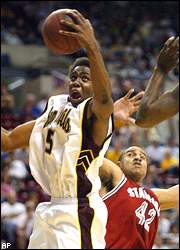 Matt Williams
@DraftExpress
Overview: A developing power forward who has imposing strength, but has had a hard time earning consistent minutes. Lacks ideal height for a power forward, but has a 7-3.5 wingspan to compensate. Doesnt have great speed, but is passably explosive. Extremely strong down low, and knows how to throw his weight around. Rebounds the ball well. Can score very efficiently when he gets position. Was dominant during his time at Arizona State, but hasnt had an easy transition to the NBA, mainly due to his defensive shortcomings. Per-40 numbers are always off the charts. Commits too many fouls due to his lack of foot speed. Needs to cut down on his mistakes to play more minutes.

Offense: Gets about a quarter of his offense off of post ups with the rest of his offense coming from his effort off the ball. Wont take a lot of jumpers, but can hit from the midrange. Shoots the ball with his elbow out to the side and brings it up from his hip. Decent foul shooter. Wont put the ball on the floor to get by his man. Shows some decent post moves. Has the strength to create space to get the ball at the rim. Has a tough time against taller players who wont let him gain position. Will use fakes to get his man into the air after he uses his dribble. Draws a lot of contact. Makes some mistakes as a passer. Runs the floor hard when he sees an opportunity to get an easy basket. Tremendous offensive rebounder. Finishers a lot of second chance opportunities. Still has a lot of room to grow as a player.

Defense: May be strong enough to be a good defender, but absolutely has to cut down on his fouls. Has stunted his development by being too aggressive on the defensive end. Needs to learn to stay on his feet and not go after fakes. Displays the strength and foot speed to be a passable defender, but makes too many mistakes. Does a good job of cleaning the glass. Can throw his weight around, but needs to be more disciplined when his man has the ball.
Read full article