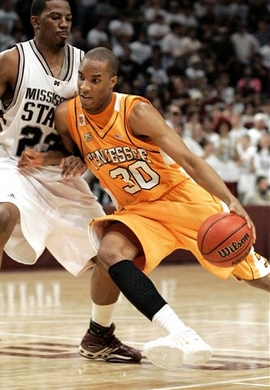 Joey Whelan
@DraftExpress
What a long, twisting road it has been for J.P. Prince. As a senior in high school, Prince was Tennessees Gatorade Player of the Year, a Parade All-American and the fourth highest rated point guard in the country according to both Scout and Rivals.com. After accepting a scholarship to attend the University of Arizona, he saw action and quality minutes in 28 games. That spring though during a routine procedure to remove his wisdom teeth, Prince developed an infection that required him to be placed in an induced coma for several weeks. He would play in three games as a sophomore for Arizona before ultimately deciding to transfer to Tennessee, where he has since become a rotational member of the Vols backcourt, playing 18 minutes per game last season, after sitting out the first 9 games of the year.

At 67 and possessing great length (much like his cousin Tayshaun Prince), Prince has the size to play all three positions on the perimeter. He could stand to develop some more upper body strength as he often has his shots altered drastically by contact from defenders, but shows solid enough body control that he is still able to serve up some impressive finishes. Prince is a pretty explosive leaper, able to elevate off one or two feet and without much of a running start. Additionally, he shows good quickness for the college level, though he is slowed on the offensive end by his improvable ball-handling skills.

At this point in his career, Prince is most certainly a shoot first player. His adjusted stats have him attempting over 13 shots per game while doling out just 3.9 assists over a 40 minute span. While his field goal shooting percentage that hovers around 50% is a big plus, closer examination shows that a huge percentage of these shots come from within five feet of the basket. Prince does his damage when he is attacking the rim, and according to stats calculated by Synergy Sports Technology, only 16% of his shots come off jumpers. His first step is very strong, as hes a crafty player who gets to the rim using a combination of hesitation and spin-moves, and does a great job of getting to the free throw line.

Too often though he will force the issue, though, attempting a tough shot or picking up an offensive foul, rather than distributing to teammates who have better shot opportunities; Prince is guilty of this most often when in transition. In all, he was only able to muster a 1.09 assist to turnover ratio, due to his tunnel vision like approach when he has the ball on the break, focusing too much on getting to the basket rather than looking to distribute. For a player billed to be a straight point guard coming out of high school, he is awfully loose with the ball and shows extremely questionable decision making skills.

As far as being a perimeter shooting threat, Prince leaves plenty to be desired. His three-point shot attempts per game have decreased each of his three seasons in college, and last year he bottomed out at a paltry 2-of-13 on the year. The lefty has an awkward form that too often looks rushed and inconsistent. Things dont really improve as he moves in either. When he does choose to pull up and fire, Prince rarely is squared or balanced when attempting his shots. His 55.7% shooting percentage from the line only further exemplifies his struggles connecting from outside the paint.

Defensively, Prince shows a lot of promise. His lateral quickness is good and combined with his size and length, he proves to be a pesky on ball defender to say the least. He is very tough for smaller guards to shoot over, something that could certainly translate to the next level if he maintains the same intensity he did last year in increased minutes.

Princes rebound numbers are good at an adjusted pace, especially for a player who spends so much time on the perimeter. His biggest area for improvement is when he finds himself getting screened. Rather than trying to fight his way above or below the screen, Prince often loses his man by trying to follow through the screen, leaving him vulnerable to get beat off the dribble. He does tend to recover nicely though when opponents opt to attempt perimeter shots.

This season is really going to stand as the litmus test for Prince. With Chris Lofton and JaJuan Smith having graduated, he stands as Tennessees top returning perimeter player. His frame has NBA guard written all over it, but the rest of his game needs to catch up. He appears to have a very intriguing upside, as hes got great size, length and athleticism to go along with some raw point guard skills, but has clearly not made his mark on college basketball yet after all the turmoil he suffered in his first three years out of high school. Its likely that the best is still to come, which makes this season all the more intriguing for Prince and Vols fans.

We wont be seeing Prince jump ship any time soon unless he shows major improvements in his overall game. What is more likely is the junior putting in two more years of work and development, ultimately leaving him as a potential draft pick thanks to his size for his position and his blossoming instincts.
Read full article

Rodger Bohn
@DraftExpress
J.P. was another player that I was really looking forward to seeing play, and he did not disappoint. He has great size for a point guard, and showed the ability to effectively play it on the next level. The lefty does a great job of handling the ball and running the offense. Prince also throws a very nice post entry pass and uses his height to see over smaller defenders. The one knock on J.P. is his very odd form in his jumpshot, but he will have time to work on that at Arizona. Defensively, Prince does an amazing job of getting out into the passing lanes, either deflecting passes or stealing the ball. While he is not on the same level as Shaun Livingston by any means at the moment, he has the potential to become a very nice prospect after a few years at Arizona due to his great height for the position.
Read full article