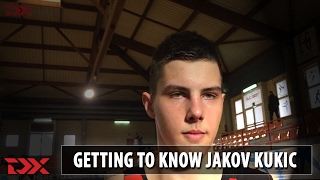 Strengths
-Legit 6' 10 with wide shoulders. Around 220 pounds, with quite a bit of room to fill out both in his upper and lower body.
-Super nimble for his size. Can get up and down in transition. Fluid dive man out of ball screens. Showed he can step out and guard the perimeter.
-Told us he's only been playing basketball for two and a half years. Has made great strides since we first saw him at the U16s in Radom. Was more of a roller, offensive rebounder there, but has added quite a bit of skill.
-Has touch on jump hooks with either hand. Comfortable in half face ups  can go to running hooks.
-Soft hands as a pick and roll finisher. Comfortable with his left or right.
-Showed the ability to step out and shoot it a little bit. 73% from the free throw line. Knocked down a deep jumper with his foot on the line. Very simple mechanics. Ball comes out smoothly with great rotation. Could turn into a stretch threat down the road.
-Still learning the game, but has potential as a passer. Reads the floor on short rolls. Can high low pass. Will likely turn into a plus distributor in time.
-Very competitive on the interior. Elite offensive rebounder  6.8 per 40. Not afraid of contact. Follows his own misses. Quick to the ball on the defensive glass.
-Very likable and light-hearted.

Weaknesses
-More mobile than explosive. Plays mostly below the rim.
-Not overly long. May be more 6'9 than the listed 6'10.
-Upper body should fill out nicely, but a little light in the lower body
-Still quite early in his development. Will make some bone-headed decisions in playmaking situations.
-More of a five skill wise right now, although he could develop into more of a four. Can become a more consistent threat from the perimeter. Not going to attack a closeout or put it down in a straight line.
-Shows flashes but could still use some polish in the post.
-Defensive fundamentals have room to improve. Upright guarding the perimeter at times. Doesn't have a great feel for defending pick and roll at this stage.
-Doesn't give you all that much as a rim protector  1.0 blocks per 40 minutes.

Outlook
Kukic, who was with Cedevita on loan from Split, had a coming out part of sorts in L'Hospitalet, showcasing a level of skill we hadn't seen from him in the past. At 6'10, with a solid frame, impressive fluidity and a budding skill set, if Kukic can turn himself into a more traditional four man rather than a slightly undersized five with average skill, he becomes very interesting. He showed he has the feet to step out and guard some fours, it's just a matter of becoming more comfortable away from the rim on defense and continuing to add to his offensive skill set. Considering his starting point and seemingly rapid progression, 16-year-old Kukic was without a doubt one of the more interesting prospects at L'Hospitalet to watch develop over the next few years.