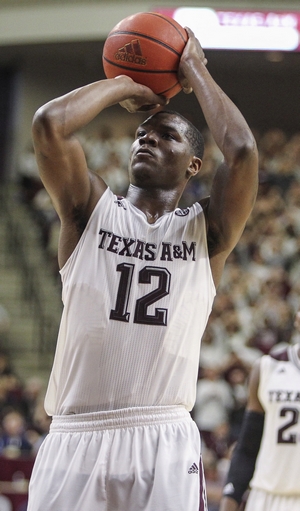 Mike Schmitz
@Mike_Schmitz
-Maine Red Claws forward Jalen Jones measured fairly well for a modern NBA bench four man at 6'7 with a 6'11 wingspan and 8'9 standing reach, to go along with a 228-pound frame. Although not as bouncy, his measurements are somewhat similar to a Thaddeus Young type, who measured 6'7.5 in shoes with a 6'11.5 wingspan and 8'10 reach at the 2007 NBA Pre-Draft Camp. Jones was able to parlay a monster rookie year (20.5 points and 9.0 rebounds per game) into a strong D-League mini-camp performance. He proved to be one of the more consistently competitive players on the floor and shot it well enough with tim and space to inspire hope moving forward. Jones showed out as one of the top NBA prospects in the camp.
Read full article

Jalen Jones was SMU's leading scorer as a sophomore before he announced his intentions to transfer in November of 2013 following a playing time dispute with Larry Brown. He transferred within the state to Texas A&M, where he started the entire 2014-2015 season for the Aggies and led the team in scoring at 19.1 points per-40 minutes. With Jones often their most effective player, Texas A&M finished in a tie for third place in the SEC but just missed out on making the NCAA tournament  closing the season with a consolation bid and second round exit in the NIT.

At 6'7 and with a strong 223-pound frame, Jones has the look of an NBA wing, even if he sees most of his minutes at power forward at the college level. He's impressively long yet maintains a muscular frame, which enables him to bruise with big men in college. Offensively, he doesn't overwhelm with his skill-level or feel for the game, but  at the college level his strength and athleticism makes him quite a handful for collegiate power forwards to handle.

He's an effective offensive player on the interior, using his length, power and quickness to create clean  albeit unconventional  looks. His preferred method of scoring is out of the post, where 20.8% of his possessions came  per Synergy Sports Technology. He made 33-of-67 (49.3%) of his post-up shot attempts last season, which is impressive at his size. With the ball, Jones is something of a swirling dervish: He lowers his head and spins/pivots aggressively in order to create separation, a compensation for his limited ball handling skills. At this point in his career, he's only comfortable shooting over his left shoulder in the post. He has a high release and high arc on his shot but shows nice touch on his fade-aways from close range.

While he's a competent scorer, he doesn't really bring much else to the table offensively besides of his efficient play around the basket. He tends to watch the ball offensively and, too often, waits for the play to find its way to him. Seldom will he move off ball to aid his team's spacing and his body language is very poor at times, as he has a bad habit of shaking his head in frustration when his teammates don't look to him as the play's primary option.

Jones also frequently roams around on the perimeter, eagerly awaiting an opportunity to take a jump shot. Jones hit on just 20-for-71 (28.2%) of his jumpers last season  per Synergy  but didn't let his low efficiency affect his confidence. A career 30% 3-point shooter, this is perhaps the most important thing NBA teams will be looking for him to improve on in his final season of college basketball, as its very likely that he'll need to play significant minutes on the perimeter as a pro. As of right now, he has yet to prove that he needs to be guarded beyond the 3-point line.

It should also be noted that Jones's stats were inflated from dominant games against lesser competition. He scored 20 or more points three times last season and those came in matchups against mid-majors.

He's extremely streaky with his shot and he'll have games in which he looks like a legitimate a sniper from deep: nine of his 12 total three-point makes last season came over three different games, versus Youngstown State, Montana and Florida. In those games, Jones shot 9-of-12 (75%) from deep. In the other 28 games Texas A&M played, Jones shot just 3-for-27 (11.1%) from deep.

On the other end of the floor, Jones theoretically has the perfect combination of length and strength to be an elite defensive player. However, in practice, Jones' defensive capabilities are actually quite limited.

He struggles guarding the perimeter, and appears to move laboriously toward closeouts. Per Synergy Sports, opponents shot 35-for-93 (37.6%) on three point attempts last season when Jones was defending. That's an extremely efficient shooting clip and can best be explained by Jones' lethargy with anticipating his opponent's movements. He loses track of his assignment off the ball consistently and sometimes overestimates the impact that his length can have in disrupting the passing lane, leaving his opponent unmarked for open looks when the ball get to him.

When defending on-ball, Jones shows a little more promise. He positions his hands extremely effectively and bothers his opponent without fouling. Still, he lacks obvious defensive fundamentals with stance and footwork. His crouch is inconsistent and unconvincing, as he often stands upright or even hunches over when defending on ball.

Overall, Jones certainly has the physical profile of an NBA player but is lacking in areas where competency is a requirement at the next level at his position, such as perimeter defense and 3-point shooting. The Aggies are expected to improve this season, as they return four starters from last year's squad. And with the heightened expectations and an extra year of familiarity with the A&M program under his belt, it's not unrealistic to think Jones can have a breakout season. With his build and athleticism, NBA teams will certainly give him a look. However, unless he improves his polish and basketball IQ, he'll struggle to find a place at the next level.
Read full article