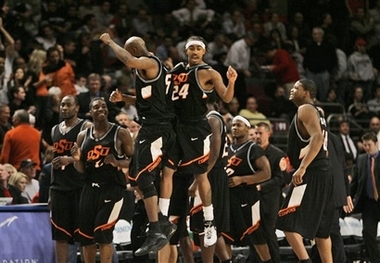 Richard Walker
@DraftExpress
Just in case anyone wasnt aware by now, JamesOn Curry made sure to display his credentials as a outstanding scoring threat, making baskets from everywhere on the court on the way to an outstanding 34 point, 7 assist effort.

Curry was extremely aggressive looking for his own offense, playing on the ball quite a bit and taking exactly what the defense gave him. He operated a great deal in the mid-range area pulling up sharply off the dribble on a number of occasions, and displaying beautiful elevation to create separation from his defender. He hits tough shots even with a defender draped all over him, coming off screens and going left or right, fading away and flailing his legs out and regardless knocking down many off-balance looks. Hes got picture perfect mechanics on his 3-point stroke as well, looking equally dangerous coming off screens, on the catch and shoot with his feet set, or pulling up with the ball in his hands.

As a slasher, Curry is not the type of player who gets to the free throw line a great deal, as his first step is average and hes a bit on the skinny side. He is smart enough to know how to get past his man, but usually prefers to pull-up before he gets all the way to the rim, which is probably a good idea since hes isnt a terribly explosive finisher. Hed rather drop a beautiful floater in his defenders eye than go up and take contact at the rim. He racked up 7 assists tonight playing a combo guard role, mostly by making the extra pass on the perimeter or finding the open man on the drive and dish, but not really by displaying any outstanding point guard skills. Indeed, hes a scoring guard in the Jannero Pargo mold, which is probably exactly the role Chicago drafted him to play. He was a bit careless at times with the ball and forced the issue on a few select possessions, leading to 5 turnoversalthough this is somewhat expect considering how much ball-handling he was forced to do.

Defensively, Curry is nothing to write home about, possessing average lateral quickness and poor awareness on this end of the floor. Hes really not physical enough, giving up too much space on the perimeter and not doing a very good job fighting through screens on the pick and roll. This might be the biggest improvement hell have to make if hes to eventually stick in the NBA, and although he tried for the most part to make his presence felt (he even fouled out), the results werent really there. Curry did as good of a job tonight making sure that the NBA and International teams are aware of his strengths with the way he played, and at the very least surely earned himself some money overseas if hes eventually forced to take that route.
Read full article

Jonathan Watters
@DraftExpress
JamesOn Currys game is defined by his offensive skills. Curry plays in the competitive Big 12, and even there, very few players can stay in front of him as he breaks down defenders. Curry has that NBA offensive skill gifthe can create his own shot and has proven that in every game he has played. Offensively, Curry is capable of scoring from most spots on the floor supported by his NBA range 3 point perimeter shooting, slashing ability, and shot creating skill. Currys in between game is tailored made for the NBA.

Curry is equally adept at moving without the basketball and is virtually a physical clone of the Detroit Pistons 2-guard Richard Hamilton. He runs the floor exceptionally well in transition and due to his lithe frame is able to attain separation from his defender when he maximizes his finesse. Equally impressive about Curry is his ability to pull up from behind the arc going both left and right off the dribble with accuracy.

It is well documented that Curry is adept at swishing, yet he is no slouch when it comes to dishing. Last season Curry lead the Cowboys in assists with 132, which was the 3rd most by a Cowboy sophomore in school history. This ability to share the rock is also best reflected in the night Curry scored 35 points, supporting that with 9 assists and zero turnovers. Very few players with a reputation as a scorer have ball-sharing abilities equal to Curry. He also had 2 games last season where he compiled 10 assists with one of those games against national power Gonzaga.

Curry in prior seasons can play down to the level of competition. He seems to elevate his game in post-season tournament play and coast in what may be perceived as lesser competition. The competitive fire needs to ruminate for JamesOn more consistently since Curry is best served hot and spicy.

Curry also needs to become more assertive defensively. He has a wingspan of a player 5 inches taller than his 6-3 and is a natural for steals and deflection when denying the passing lanes. Without much effort, Curry has averaged a steal a game and with more effort would be an ideal close out defender for opponents due to his reach and length. Shot selection and decision making have also been issues for Curry in the past, he has a tendency to overestimate his own offensive ability at times, and will settle for very difficult shots with a hand in his face. Despite his gaudy assist numbers, he is still not a true point guard, and indeed he is asked to share ball-handling duties on this team with 5-11 Byron Eaton. Oklahoma State needs this insurance at times because of how streaky Curry can be, both in his shooting and playmaking ability. So far this year this hasnt been much of an issue.

All in all, JamesOn Curry looks much improved over his fairly disappointing sophomore season. He has a high basketball IQ for offensive basketball coupled with distinguished court awareness that is drenched with NBA instincts. Curry also does not cower in the face of adversity and plays his best basketball when the stakes are highest. Curry this season is now utilizing his prodigious skills more consistently regardless of competition exemplified by his last 2 games. Since a multitude of NBA teams are playing fast break basketball, Curry has the opportunity as he keeps improving to find an NBA home. Currys physique is reminiscent of the aforementioned Detroit Piston Rip Hamilton, Sacramento King guard Kevin Martin, and New York Knick guard Jamal Crawford.

Curry, who while in high school had his scholarship rescinded by North Carolina coach Roy Williams due to an arrest for marijuana possession with the intent to sell, has made the most out of his second chance with OSU. He has been a model student/athlete and has reflected next level mental toughness by not cowering to past mistakes. Finally when youre the all time prep leading scorer for the state of North Carolina where 2 of the top ten scorers in NBA history prepped Michael Jordan and Dominique Wilkins, Currys basketball body of work must be open mindedly evaluated.
Read full article