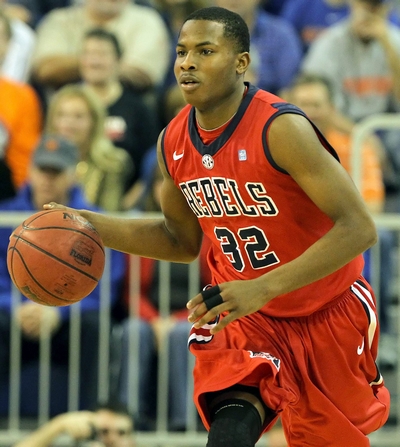 A relatively unheralded high school recruit, Jarvis Summers played a major role in his first three seasons at Ole Miss, starting nearly every game and averaging 29 minutes per contest for his college career thus far. He took a major step between his sophomore and junior seasons, going from being almost a non-factor offensively to one of the most prolific and efficient scorers in the SEC, earning him second team all-conference honors.

Summers has impressive physical attributes, showing great size at 6-3 (possibly 6-4) with a strong frame, a solid wingspan and very good athleticism. He is quick in the open floor and has good end to end speed, as well as a strong first step to help him create his own shot.

While Marshall Henderson received much of the attention nationally with his porous shot-selection and silly antics on and off the court, Summers was the most important player in Ole Miss' lineup. He saw a huge amount of offense in pick and roll and one on one situations, and was able to score very effectively in a variety of ways.

Summers is first and foremost a terrific shooter, capable of making jumpers equally well with his feet set (47% in catch and shoot situations) and off the dribble (44% on pull-ups). He didn't shoot a ton of 3-pointers (only 3.4 per game), as he spent a lot of time with the ball in his hands and creating for himself and others off the dribble, but he was very effective when he did shoot from outside, hitting 42% of his 3-pointers on the season.

Ole Miss had very little in the way of ball-handling or shot-creation ability outside of Summers, which put a heavy burden to make things happen himself or get the ball to Henderson for a questionable, low-percentage shot.

Summers is not the most natural playmaker or facilitator, as he tends to dribble with his head down and doesn't do a great job of getting his team into the flow of the offense. He's just an average ball-handler, particularly with his left hand, as he doesn't operate at different speeds and has a difficult time getting all the way to the basket despite his athletic gifts.

Summers is the rare player who shoots more runners/floaters than layup attempts, but somehow he made this work last season, converting an outstanding 49% of his field goal attempts in these situations, the fourth best rate in all of college basketball.

Summers is simply a tremendous shot-maker, showing terrific touch and feel for putting the ball in the basket, which also extends to his jump-shooting ability. Most players would struggle to score efficiently operating in this manner, but Summers finds a way to make it work, which is a testament to his skill-level and overall talent. The mid-range off the dribble jumper is a bad shot for most players, but Summers finds a way to shoot nearly 60% on these attempts, good for third best in the NCAA, which is impressive considering the amount of defensive attention he draws.

Defensively, Summers is quite a bit less effective. His fundamentals here are very poor, as he tends to lose his focus easily and is often caught flat-footed on the perimeter being completely out of a stance. He is a little bit lazy here, getting blown by off the dribble very easily and not doing a great job closing out on shooters or fighting over screens. Ole Miss played a lot of zone last year, likely due to the defensive limitations of their starting guards Summers and Henderson, and found mixed results, but long-term he is going to need to figure out a way to be more effective in this area.

Summers actually has solid tools on this end of the floor, and might be able to be coaxed into playing better defense in a situation where he isn't asked to carry such a heavy offensive load. He has nice size, solid length, and good athleticism, so there isn't really any reason why he can't be decent here if he learns how to do it and puts the effort in.

Overall, Summers' junior year presented more questions than answers, many of whom NBA teams will be looking to solve this upcoming season. Can he maintain his incredible shooting percentages with the type of shot-selection he displayed as a junior for another season? Or will he revert back to the mean? Is he a real point guard, or a combo guard who is best suited coming off the bench with more talent around him? How high is his basketball IQ? Can he become a capable defender down the road? Does the fact that he's young for his class (not turning 22 until March) mean he still has a lot of room for improvement?

Summers presents a very unique blend of strengths and weaknesses, which NBA teams will surely be paying close attention to as a senior to see how he evolves. There aren't many guards with his talent-level in the senior class, so it will be interesting to see what kind of year he has.
Read full article