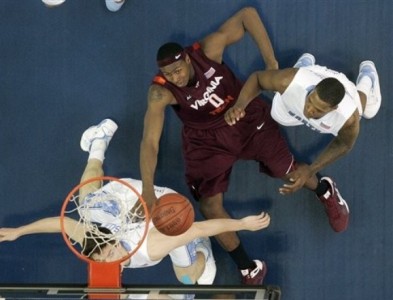 Virginia Techs 67 power forward Jeff Allen improved upon his solid freshman season with a sophomore campaign that opened more than a few eyes from players, coaches, and scouts alike. There were some moments where Allen looked like one of the top big men in the ACC, such as 22 points and 11 rebounds against Xavier and 17 points and 17 rebounds against Seton Hall. Then, he was suspended for making an inappropriate gesture to the crowd, which was a prelude to a late-season slump. Allen is an interesting player with the potential to, at the very least, play at a high-level overseas, but there quite a few question marks and obstacles blocking his way.

Standing at just 67, Allen lacks ideal size for an NBA power forward. After shedding around 30 pounds during the summer before his sophomore season, however, Allens frame is much improved, allowing him to move quicker and better utilize his athleticism. Though he runs the floor very well and shows solid quickness for a big man, he is only a decent athlete and lacks the explosiveness of your typical undersized big men. This, combined with his lack of size, limits his potential at the next level.

Offensively, Allen has an intriguing repertoire, but lacked the consistency and focus to dominate on a nightly basis last season. His most significant impediments are his footwork and ball handling abilities, though he has improved in these areas. At this point, he has a tendency to take too many steps in the post, allowing the defense to collapse on him before he has the chance to put up a shot. His awareness is not great in the post at times, either, as he will put his head down and attack the basket, sometimes without knowing where he is on the floor. As evidenced in his poor assist-turnover ratio, he does not pass out of double and triple teams, either, instead choosing to push through defenders to mixed results. His lack of ball handling stifles him in this area, as well, because he is not able to utilize his quickness in the post because he cannot move quickly with the ball in his hands. That being said, Allens strength, quickness, and diverse skill set can make him a tough mark in the post when he is focused and playing to his potential. Similarly, the flashes he showed of incorporating turnaround jump shots and baseline jump shots into his post-offense are intriguing and he should look to incorporate them into his offensive repertoire more often this season.

Moving away from the basket, Allen continues to intrigue. He improved considerably as a shooter, hitting 50% of his two point field goals and 40.5% of his perimeter jump shots. Though his mechanics are inconsistent at this stage, he has a quick release and solid range. He does not get a tremendous amount of elevation when he shoots, however, which combined with excess motion and a tendency to push the ball, will not help him get his shot off at the next level. That being said, with continued improvement and better shot selection, Allen could develop into a very good spot-up shooter, which would add an NBA ready skill to his repertoire and greatly help his chances at the next level. For a big man, it is also interesting that he has some semblances of a mid-range game and it is not surprising to see him pull up off of the dribble and shoot from inside the three point line. That said, he hardly ever squares his body to the basket and rarely connects on his attempts, often appearing to force the issue and prove his value as a small forward.

On the defensive end, Allen averaged 2.3 steals and 1.6 blocks per 40 minutes pace adjusted, but he is not a particularly effective defender. He has solid length, but his lack of awareness and the fact that he often finds himself out of position or overmatched limits his effectiveness. His perimeter defense suffers because he gives his man too much space and in the post, he has trouble staying in front of the quicker, more athletic, and more skilled big men in the ACC. He is a good on the defensive glass, as well, but at this point, he does not grab many boards outside of his immediate position. His defensive deficiencies could be one of the bigger issues holding him back as an NBA prospect, as he surely would struggle if asked to convert to the small forward position.

Jeff Allen has a lot to prove before he is considered to be a legitimate draft prospect. Much improvement is expected from him this season on both side of the ball, as scouts will look to see whether or not he can take another big step forward. In addition, scouts will be watching to see if he can maintain his intensity while not falling victim to his emotions, which have resulted in two unfortunate suspensions thus far in his short career in Blacksburg. The fact that the rising junior will turn 23 this upcoming June is not a feather in his cap either. Even if it is hard to believe that he would be ranked this low if he were a few inches taller, Jeff Allen has the opportunity to prove himself in a string of marquee match ups against the nations top big men.
Read full article

Eric Weiss
@DraftExpress
Allen is a very likeable player. He is a tweener forward with a wide frame and deceptive quickness. Allen has good hands and nice footwork inside which he uses to finish with his back to the basket quite well. But Allen can put it on the floor as well and knows how to use his body to create separation from his man. Hell be a good player in college for sure.
Read full article

Jonathan Givony
@DraftExpress
As productive a big man as youll find here, Jeff Allen did a nice job keeping his team in the game today against Michael Beasleys Notre Dame Prep, even if he had a huge part in the eventual loss by fouling out late in the game on an unnecessary technical foul for complaining to the refs. Hes able to move people around in the post thanks to his huge frame and outstanding strength, taking contact around the basket and showing nice footwork and touch with his back to the hoop. His big, soft hands make him a presence on the glass as well, as hes a slightly better athlete than he initially looks, particularly with the way he gets off his feet. Graves also a pretty good feel for the game, knowing how to get his team into transition with a slick outlet pass and not being a liability in the post when the double-team eventually comes. He is attempting to make the transition out to the wing right now, and seems to be trying to prove that hes capable of doing so more than he really should. Weve seen him barrel his way into the paint on numerous occasions over the past two days, sometimes using his strength and touch to finish nicely around the basket, but also coming up with quite a few offensive fouls since hes really too wide to possess very good body control. Allen is heading to Virginia Tech where he should be a nice ACC role player if he is willing to play up to his strengths, something that hes done only on occasion here in Worcester. Cutting out the pull-up fadeaway jumpers from 18 feet out of his gae would be a good start. Improving his perimeter shot should definitely be a priority for him.
Read full article