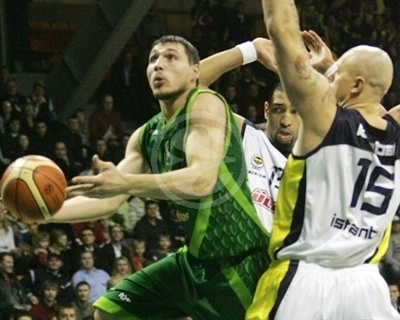 Jonathan Givony
@DraftExpress
We discussed Maciulis NBA prospects back in 2007 when he was draft eligible, and the only thing that seems to have changed since then (beyond the uniform he wears) is his perimeter shooting, which appears to be much more consistent these days. Hes still the same strong, physical and fairly athletic small forward, not terribly skilled, but productive regardless thanks to this toughness and fundamentals. The fact that he is now a legitimate threat to make shots from beyond the arc with his feet set makes him a bit more interesting.
Read full article

Kristian Hohnjec
@DraftExpress
Jonas Maciulis was the only player, along with Rudy Fernández, that showed extended maturity as a rookie during this Euroleague season. Aggressive and very dedicated, Maciulis managed to steal the show quite often, despite playing for the most unlucky team of the competition. This bad luck helped increase his playing time, but has nothing to do with the increased effort that the youngster was showing as the season was moving on, which made him the most trustworthy perimeter player of Zalgiris after the first round.

Maciulis has a very good body for the wing position and is strong and experienced enough to make good use of it. His basketball IQ is rather high for his age and he is already a competitor, after just half a season. He struggles sometimes and there are some shortcomings in his game, but he is athletic enough and has quite a good wingspan to cover for them. Maybe in the long-term, it will be proven that he isn't big enough to be more than a decent small forward, but this is his natural position and he has been learning it pretty well so far. If he needs to play some shooting guard in further stages of his career, he won't be bad, but he will have to work on his shooting and ball-handling skills, both of which are not the best parts of his game. In any case he could emerge as a nice big first-pass guard, with his ability to take advantage of his teammates and become more creative.

Defensively, Maciulis is very good. He can provide his team with decent size and he has the footwork and passion to prevent opponents from outmuscling him. Very good use of both his strong hands and his feet give him a lot of steals, making him probably the most complete youngster on both sides of the floor this season. He is a fighter and has good defensive positioning to add in his overall fine ability to fill the stat-line, while he is a rather good shot-blocker for his age and height, still lacking the timing to compete with older and bigger players though. Maciulis is not your typical European prospect in the sense than he is more of a bruiser than he is naturally skilled, but it wouldn't be a shock if a team decided to gamble on him in the 2nd round to see if he can develop the rest of his game over the course of the next few seasons in Europe.
Read full article

Luis Fernández
@DraftExpress
Its no surprise that hes such a valuable piece for his coach, as Maciulis provides a great physical lift whenever hes on court. Offensively, he feels extremely comfortable near the basket, a situation hes actively looking for lately, whether posting up his rivals, slashing towards the basket or cutting to receive in the paint. At 6-6, hes not that big for a small forward, but hes an impressively strong athlete -especially considering his age- who loves physical contact. Jonas is particularly useful when sharing the floor with bigs who enjoy some range with their jumpers, such as Jankunas or Mottola in Zalgiris case, so he can take advantage of larger spaces in the paint. Anyway, he can also play in the perimeter, and doesnt look bad at all shooting off the dribble from the mid range area. Displaying three-point range as well, he still struggles when it comes to show consistency, and his mechanics are a bit slow, so he needs to be quite open to enjoy some effectiveness.

However, its not that far-fetched to think that Maciulis could eventually develop more than a decent perimeter stroke. Given this case, even the NBA might emerge as an option for him. His wingspan, athleticism, explosiveness, strength and aggressiveness should be able to make up for his lack of size up to a certain degree. Furthermore, hes an able defender, a nice ball-handler, a reliable passer and a guy who understands the game. Just to provide an approximate idea about what were talking about, he could turn into some kind of shorter version of Andres Nocioni.
Read full article

Luis Fernández
@DraftExpress
Jonas Maciulis, who had a terrific showing in the Euroleague with 22 points, 5 rebounds, 3 assists, 4 steals and 3 blocks in a dramatic game that called Pau Orthez winner in Kaunas after two overtimes. Despite the loss, it was an impressive outing for Maciulis, who showed remarkable versatility. Hes a small forward all the way, but he played parts of virtually every position from point guard to power forward in this game. Among other things, we could see him taking the ball up-court on a number of times, occasionally running the offense as a point guard, and executing a pick-and-roll situation (with Tanoka Beard) as an orthodox playmaker (he delivered a perfect assist to his teammate). He asked for the ball in the low post, taking advantage of his physical superiority to score with his back to the basket. He did a good job cutting and receiving the ball to attack the basket and to shoot from the perimeter (with poor results, though). He also scored in coast-to-coast fashion, beating his defender off t he dribble. He passed the ball within the offensive flow, and hematched up against both forwards on defense. Maciulius kept his hands very active, looking to stealing the ball from any rival on the court. He worked hard on the glass as well. For some stretches in the game, particularly the first three quarters, he was all over the court.

It isnt his first great performance and it wont be the last one (he delivered 17 points, 4 rebounds, 2 assists and 2 steals this in the Baltic League this week as well). Something really strange would need to happen in order to keep Maciulis from becoming a very good player at the highest European level. Hes a very strong wing (he can already outmuscle most of his matchups in international basketball), intense and aggressive, and knows how to take advantage of his physical dominance. Hes quite athletic, but also skilled. His size (6-6; poor for a SF) and his inconsistent perimeter stroke (1/6 from the three-point line in this game; 28% in the Euroleague, and little off-the-dribble ability in this department) seriously hurt his draft chances. After all, its pretty obvious that the physical advantage he enjoys in Europe would be significantly diminished in the NBA, so his effectiveness would take a big hit. But hes a name to remember, as somebody might fall in love with his toughness and character, and bet on a future development.
Read full article

Carlo Sandrinelli
@DraftExpress
Another World Junior Champion, Jonas Maciulis made his debut in the Euroleague this season. And while stats-wise he probably doesnt deserve to be in this column, the other aspects of his game cant allow us to drop him into the Neutral category.

Thats because the word neutral is exactly the opposite of how Maciulis can be described . He brings fiery play for every second hes on the court and it only took one game for him to make himself a fan favorite in Kaunas. It couldnt be any other way when after entering your very first game you make a steal and come up with an enormous offensive rebound just 5 seconds into your career.

However, looking beyond the sentimental value of his play, the biggest problem for Maciulis is his lack of a position. His body, legs and arms are very strong  all muscle we could say. He should be perfect for the power forward position, but his height and frame make him a natural wing, so he gets stuck in between. His coach is also stuck on it and uses him on occasions as a SF or goes with a smaller lineup with Maciulis at PF. Being strong and having such a relentless attitude, Jonas can sometimes hold his own even versus frontcourt players in Europe, but it would be unimaginable to think about him going up against stronger NBA power forwards. Maciulis doesnt play much on the wing either. He can hit an occasional triple, but hes much more comfortable under the basket. He doesnt receive many opportunities yet in offense, but hes such a warrior that grabbing offensive rebounds and putting it in is nothing new for him. He always brings a spark to his teams defense and obviously the opposite player hates to have such a nuisance on him. Being a player who refuses to back down, foul trouble is very often a concern for Maciulis. On the contrary his free throw shooting needs improvement on the other end. Concerning the NBA the door is closes not only because of his tweener status, but also because Jonas himself has said that the NBA style of play doesnt interest him and he cant imagine himself there.
Read full article