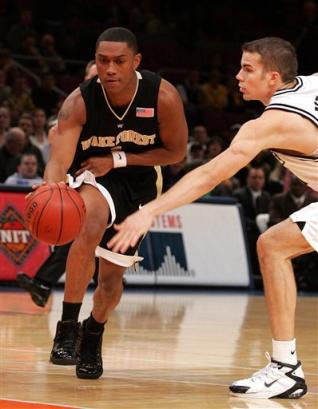 Jonathan Givony
@DraftExpress
Relative to expectations, Justin Gray might have been the biggest surprise of the four players we saw here. Last time we met up with him, he was struggling through a pretty lackluster showing at the Portsmouth Invitational Tournament. What we learned here is that he is most certainly a much better prospect in these types of private individual settings where his offensive versatility is really on display. If this workout was any indication, it wouldnt be a surprise at all to see him shock some teams with how good he looks in the next few weeks, and possibly in the pre-draft camp if he is invited.

Of the four players, Gray was easily the best ball-handler in the drills. He looked smooth and confident at all times, executing the drills to perfection quickly and very much under control. His shot looked terrific both in the drive and kick drills as well as when asked to pull up off the dribble running up and down the floor in the full-court. His footwork is especially impressive, and his instincts as a scorer were always evident.

In the one on one matchups, Gray was very dominant at times. His 3-pointer was falling for him and he was taking the much bigger players off the drill at will. He took a number of tough contested shots with long arms in his face, but this didnt seem to bother him even one bit, even though he was a bit streaky at times. When getting to the basket, he finished nicely on more than one occasion with a swooping one-handed lefty floater in the lane that looked highly polished. He scored in almost every way possible in this workout, whether from well beyond the 3-point arc, pulling up from mid-range and in the paint.

Defensively it wasnt easy to evaluate him since every player here was at least 7 inches taller than him, and they are of course not the type of players hell be asked to guard. Shades of his typical lack of defensive awareness did come out at times as we saw this past season at Wake Forest. His shot-selection was at times a bit questionable as well.

After having watched him play extensively over his senior year and realizing how little point guard he has in him, it was nice to again see what made him such a highly touted player to begin with. Someone could certainly take a flyer on him late in the 2nd round as an Eddie House type scorer to bring off the bench, or he could find himself making six figures every year as an absolute killer of a shooting guard in Europe. Either way, hell be playing basketball somewhere for a very long time to come.
Read full article

Jonathan Givony
@DraftExpress
Streaky play and poor defense have all but eliminated any shot he has of being drafted next year, unless he can really show that he can play the point if Chris Paul decides to leave the team. Wake needs Gray to be a consistent #2 option and toughen up their perimeter defense if they are going to have any shot at making the final four. He has been wildly inconsistent this season and has been torched without mercy on the perimeter repeatedly for Wake.
Read full article