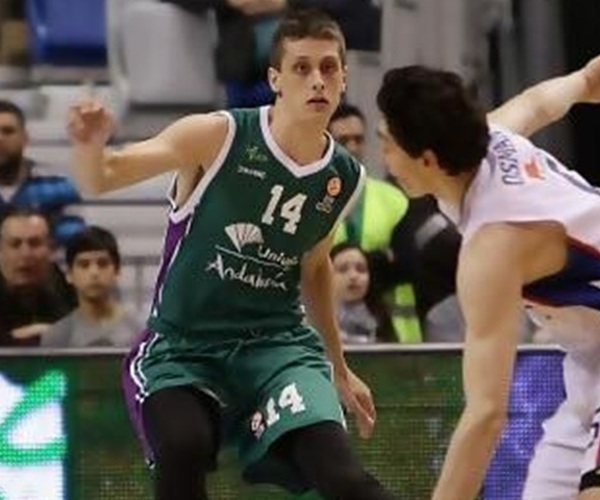 DraftExpress
@DraftExpress
-Bosnian big man Kenan Karahodzic posted very solid measurements in Treviso for a power forward, at 6'9 1/2 without shoes, with a 7'1 wingspan and a 230 pound frame that will likely continue to add weight with time.

He proved to be one of the most skilled big men at the camp, with a gorgeous shooting stroke that he can use to knock down jumpers from anywhere on the floor. Karahodzic's footwork and body control are exceptional for a player his size, as he can come off screens and make shots on the move the way most guards can only dream of, which also being highly capable of putting the ball on the floor. He can handle the ball in transition and attack his man in the half-court as well, sometimes to find the open man in drive and dish situations. Offensively, it's difficult to find players his size who are as versatile and instinctive about putting the ball in the basket as Karahodzic is.

On the downside, Karahodzic plays the game with very little emotion, seemingly looking like he's just going through the motions too often, particularly on the defensive end. His expression never changes and his intensity level is very low generally, which is reflected in the poor rebounding numbers he's posted at every level.

At times during the camp you wondered how a player as skillful as Karahodzic could still be stuck coming off the bench more often than not for a bad team in the Spanish third division, but there were enough hints here in Treviso to help suggest why. Thankfully for Karahodzic, he has a world of talent at his disposal and should know exactly what it will take for him to reach his full potential as a basketball player.
Read full article

DraftExpress
@DraftExpress
Kenan Karahodzic is an interesting prospect with an versatile offensive skill level for a 6'11 big man. Averaging 11.3 points and 6 rebounds per game for Clinicas Rincon amid mop up appearances in the Euroleague and ACB for Unicaja. He lacks a degree of experience and has never appeared in FIBA play, making this an important moment for his NBA prospects moving forward. His ability to make 3-pointers despite occupying the power forward and center positions is always interesting in today's basketball.
Read full article