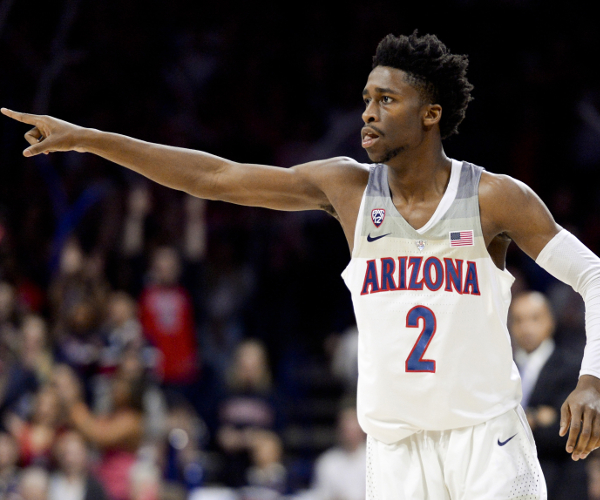 Why He Fits: Despite an underwhelming freshman season at Arizona, the former Top-25 high school recruit does have some intrigue as an upside play for a team that believes in its D-League team and player development infrastructure. For all of his flaws, Kobi Simmons is an elite athlete in terms of twitch, first step and leaping ability in space. His jab step is devastating and he showed flashes as a microwave scorer, going for 14 plus points ten times in the Wildcats' first 20 games. Although often playing a highly inefficient style, Simmons has a lifetime scoring average of 20.1 points per 40 and can get going in a hurry. He's not polished offensively, but he can glide to the rim off the bounce, finish with floaters, or create space off the dribble to get to his pull up on occasion. Simmons has quite a bit of work to do in terms of his ability to impact winning, but there is some potential value in 6'4.5 change of pace scoring guards who can go get a bucket.

Key Stat: 14 points and 4 assists on eight shots in 29 minutes of the second NBA Combine game

Drawbacks: After his strong start to the season, Simmons tailed off drastically, playing a total of 43 minutes in Arizona's final seven games, scoring just 13 total points. His mentality throughout the season really wavered, which was the case at the high school level as well. Simmons plays an inefficient brand of basketball as his overall feel for the game is lacking, and his skill set isn't quite polished enough to be a reliable bucket getter at this level. He's a streaky shooter who doesn't like contact in the paint and has a long ways to go before being able to operate as a lead guard. Simmons is also very underwhelming on the defensive end, where, while very quick laterally, he avoids contact and really struggles versus size at 166 pounds, making him a one-position defender. Simmons is a long way from being able to help an NBA team, and he may need to bottom out first before his talent resurfaces.
Read full article

Josh Riddell
@Joshua_Riddell
Kobi Simmons was one a member of a strong Arizona freshman class that also included Lauri Markkanen and Rawle Alkins, and was highly regarded as the #24 ranked RSCI recruit. Simmons was inserted into the starting lineup in December and he started 17 straight games for the Wildcats in the backcourt. With Allonzo Trier returning from suspension, Simmons saw his minutes slashed down the stretch after being removed from the starting lineup in February, and he played just six minutes per game in seven games in March at the end of the season.

Arizona brought in another tremendous recruiting class in the spring of 2017, and with Simmons not really seeing eye to eye with the coaching staff for much of the season, it was hardly a surprise to see him part ways with the Wildcats and begin his professional career, despite his relatively underwhelming freshman season.

Simmons isn't a refined guard at this point in his career, but a NBA team very well make take a chance on him in the draft because of his physical tools and long-term upside. Measured at 6'4, with a 6'6 wingspan, Simmons has solid size to slide into either guard position depending on how his skill set develops, but weighing just 166 pounds at the NBA Draft Combine, he will certainly have to get stronger to hold his own over the course of a NBA season.

While Simmons has some experience playing either guard spot, he is much more comfortable as a scorer than as a distributor or facilitator. He has an excellent top speed in the open court and a quick first step to get past his defender, while also having the explosiveness to play above the rim. He will need to learn to harness his athleticism as his carer progresses, as he has a tendency to play out of control with the ball at his top speeds. This has hurt his efficiency as he ended the season with just a 50% true shooting percentage, second lowest among prospects in our top 100.

Simmons has been most effective in transition where he can use his impressive speed to race down the court and get to the rim. He's had less success in the halfcourt, where he has been unable to find his niche as an efficient scorer. When he drives, he uses his an extremely quick first step to get into space and has displayed some nice footwork to step past the help defense but he lacks a high level of ballhandling skills, which limits him to being primarily a straight line driver. His decision making on drives leaves a lot to be desired, as he doesn't always have a plan when he puts his head down off the dribble and this leads to him driving right into traffic or being forced to put up a wild shot at the basket.

When he does get to the rim, he has struggled to finish as he shot a poor 44% on his 52 attempts around the basket and just 36% on his floaters according to Synergy Sports Technology. Although he has the potential to get into the paint and he is aggressive attacking the basket with no fear he will need to improve his body control in the air to become a more composed finisher. Filling out his frame could help his toughness and efficiency as he could become more willing to play to contact as he attempted only 4.4 free throw attempts last season.

Playing off the ball, Simmons showed flashes as a cutter and a slasher when attacking closeouts. In order to maximize his potential attacking closeouts, and as a NBA player overall, he will need to improve as a spot-up shooter. His mechanics have some major flaws and he made just 32% of his three point attempts as a freshman. He has a low release point and often has a hitch in his motion which limits his accuracy.

Simmons has a long way to go in developing his point guard skill set if he wants to be able to play on the ball regularly at the next level. He can be a ball stopper and doesn't always have his head up on drives, leading to missed assist opportunities. His 0.32 pure point rating was third lowest compared to point guards in our top 100 and his vision and decision making with the ball will need some drastic improvements for a NBA team to trust him to run an offense, even in short stints with the second unit.

Defensively, Simmons has the tools to be a defensive asset but has struggled to make a consistent impact on that end. When he is engaged, he can be a pest on ball by moving his feet and using his quick hands to bother his opponent. He will be able to use his athleticism to stay in front of point guards and will be able to guard some off ball players if he can get stronger.

However, his consistency leaves much to be desired. Too often he had lapses of focus both on the ball to allow his opponent to drive by him or off the ball where he lost sight of his man or the ball which took him out of the play. He has to work on bringing a higher level of consistency and effort to be a reliable defender.

Simmons is a major work in progress as a prospect but his potential is clear thanks to his physical tools and youth. While he is somewhat of a blank slate as a player, a team will need to spend significant time developing his on-court skill in the D-League to harness his potential into actual production. Simmons is a few years away from contributing at minimum, but if he finds himself in the right situation and is willing to work on his areas of improvement, he could work his way onto an NBA active roster down the line.
Read full article

Jonathan Givony
@DraftExpress
Freshman guard Kobi Simmons has all but fallen out of Arizona's rotation as of late, seeing just 38 total minutes of playing time in their past six games. He's looked highly dejected and clearly not on the same page with the coaching staff, which is particularly surprising considering his track-record going into college. NBA scouts like Simmons' talent-level but have major concerns about his intangibles, especially considering how much development he still needs in terms of his skill-level and basketball IQ. He's likely to declare for the draft, and will benefit from the advent of the two-way contract, which will allow him to make some decent money while the team that picks him evaluates if he can get his act together in the D-League.
Read full article

DraftExpress
@DraftExpress
Georgia native Kobi Simmons is the highest ranked high school player on the US Select Team, and while he flashes tremendous potential, he has not been particularly dominant here in Treviso. Making poor decisions with the ball trying to be too flashy, settling for floaters while avoiding contact, and not making the simple play at times this week, Simmons was better on day three, scoring 13 points while dishing out 4 assists. His lack of strength has limited him a bit against the more mature, organized defenses he's faced. His quickness is an obvious asset, especially when he asserts himself defending on the ball, as is his ability to play above the rim and knock down shots off the bounce, but it appears that he's still learning how to consistently exploit those tools against quality competition. This isn't the easiest setting for a player like Simmons to excel in, as his best days are clearly ahead of him, so it was nice to see him find a rhythm in his last game in Italy.
Read full article

Strengths:
-Great size for his position
-Smooth, fluid athlete
-Quick in transition
-Very good first step driving left
-Puts pressure on the defense with his probing, aggressive style of ball-handling
-Can make an outside shot
-Shot 81% from the free throw line at the adidas Gauntlet (87 attempts)
-Quick hands for steals
-Anticipates in passing lanes
-Very good potential defensively thanks to his size

Weaknesses:
-Still learning the nuances of how to run a team efficiently
-Somewhat wild in his approach to the game
-More of a scorer than a facilitator at this stage (-1.7 PPR in Gauntlet)
-Shows average vision in the half-court
-Lack of strength makes it difficult to finish around the rim effectively in half-court settings
-Not a consistent 3-point shooter
-Very low release point on his jumper
-Has an average wingspan relative to his height

Outlook: Talented guard who's reputation revolves more around his potential as a big point than it does around his actual production. Still learning how to maximize his tools on both ends of the floor and play efficient basketball. Only 17 so still has plenty of time.
Read full article