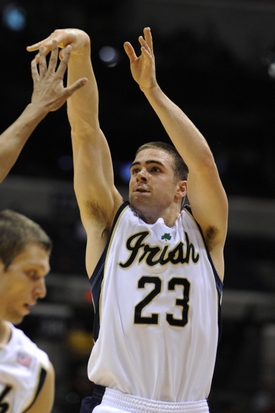 Joseph Treutlein
@DraftExpress
Few players in the country have started their season as well as Kyle McAlarney, and even fewer can boast that their best games have come against the likes of Indiana, Texas, and UNC on national television with countless NBA scouts and executives in attendance. McAlarney very quickly elevated his profile as a player with his unbelievable 21 three point makes in his 3 games at the Maui Invitational, doing so on 55% shooting, which is hardly an aberration for the sharp-shooting senior, shooting 47% from three on the year, barely up from 44% last year and 46% the year prior.

In analyzing McAlarneys game, its hard to start with anything other than his jump shot, as hes a truly exceptional shooter, one of the best the college game has to offer. His form is textbook through and through, with a quick, compact, efficient form that boasts a high release and effortless range. Its probably safe to say about one third or more of his three-point attempts actually come from NBA range, and hes shown no hesitancy or lack of confidence to hoist shots up from behind there as well, showing the ability to hit shots from at least two or three feet past NBA range on occasion. His shooting form doesnt change one iota with the increased range, staying consistent and not trying to overcompensate at all.

While McAlarney is clearly at his best spotting up, he can shoot the ball from deep in a variety of ways, coming off screens, moving left or right, with a hand in his face, or off a dribble or two. Despite being blanketed by defenders frequently, he is able to get separation for his shot consistently, as he doesnt need much to get it off. He doesnt take very many bad shots, almost always having proper balance with his shoulders squared.

While itd be unfair to call McAlarney a one-dimensional player, its definitely worth pointing out just how much of his game revolves around his three-point shot. This season, 91 of his 120 field goal attempts (76%) have come from deep. This is a bump up from last year, but even then, he took 245 of 383 attempts (64%) from deep. Its really hard to argue with his preference to stay behind the arc, though, as hes shot better from three-point range than two-point range for the past two seasons, an incredibly rare feat.

Looking at the rest of his offensive game, McAlarney does have some weapons inside the arc, namely a right-handed floater in the lane that he shows good effectiveness with, even amidst defenders outstretched arms. He gets into the lane mostly using hesitation dribbles and shot fakes to gain separation, as his quickness is below average for a high major college point guard. At the rim, when not using his floater, hes inconsistent scoring, as he doesnt get very much vertical lift, and because of this he seems to rush a lot of his lay-ups in an attempt to avoid help defenders. Because of this, hes not a very good finisher at the rim overall, and gets to the free throw line at an extremely poor rate (although hes yet to miss this season once there).

Judging McAlarney as a point guard is a little tough due to the situation at Notre Dame. Junior guard Tory Jackson is the primary ball-handler, averaging around 6 assists per game for the past two seasons, while McAlarney spends a lot of time off the ball, where hes better utilized for his outstanding outside shooting. In terms of point guard skills, McAlarney definitely shows flashes, bringing the ball up the court, running the team as primary ball-handler when Jackson is on the bench, and showing good prowess with the pick-and-rolls, taking full advantage of the fact that opposing defenders need to respect his jump shot, making them pay if they give him space, or making the smart pass if they dont.

While he shows the ability to make all the passes from the pick-and-roll, going above, between, or around defenders with chest, bounce, and lob passes, McAlarney does show some inconsistency in this area, making some questionable decisions at times, especially when faced with aggressive traps. His turnover rate has traditionally been quite high throughout his career relative to his usage, but hes been able to cut down on his mistakes significantly to the point that hes rather mistake-free these days. His 2.2/1 assist to turnover ratio is quite encouraging.

Defensively, McAlarney runs into trouble at times, and projects to be a liability at higher levels due to his lack of size and quickness. At just 60, without much length to make up for it, along with below average lateral quickness, McAlarney would definitely be at a disadvantage physically in the NBA. He does play tough, committed, smart defense, contesting shots, doing his best to stick with his man, and showing a good stance, but he shows really problems dealing with quick change-of-direction moves on the ball, getting beat frequently in isolations with quicker guards.

Looking forward to the draft process, McAlarney appears to be an ideal candidate for the Portsmouth pre-draft camp, where he can look to show off more point guard abilities than hes able to at Notre Dame. The change in format of the NBA pre-draft camp this year definitely hurts McAlarney in that it will be one less opportunity for him to show something scouts havent seen from him in a 5-on-5 setting, so its that much more important he show his full repertoire of skills over the course of this season. Realistically, considering his lack of size, athleticism, shot-creating ability and defensive potential, he looks like a stronger candidate to play in Europe than the NBA, although stranger things have happened in the past.
Read full article