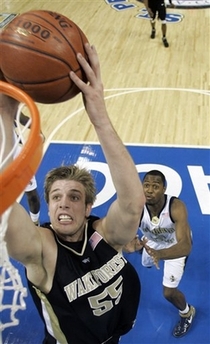 Jonathan Watters
@DraftExpress
Although hes yet to really put everything together for consistent stretches, Kyle Visser has shown some really nice flashes of potential that have to look intriguing to teams drafting in the late first or early second round. Today, Visser scored with a couple of jump-hooks inside, and came up with a gorgeous scoop and finish off the glass after catching a tough pass and adjusting his body nicely to show excellent body control. Visser would have finished up with an even better stat-line had he managed to knock down his shots at the free throw line, as he has a nice looking stroke, but just hasnt been able to convert at all during the camp so far. Another negative to come out was the way Visser was outmuscled in the paint by Chris Richard and Herbert Hill, lacking the core strength to hold his position on the block. He also struggled on team defense picking his spots on rotations , picking up four fouls in 17 minutessomething that has been a constant problem for him this year.
Read full article

Joey Whelan
@DraftExpress
Wrapping up what turned out to be a breakout season for Wake Forests senior center Kyle Visser were two fairly solid showings in the ACC tournament, one more than he was expected to have anyway playing for the 11th seeded team.

Visser didnt miss a shot in the first game, a double overtime 114-112 victory over Georgia Tech. He scored 20 points on 7-7 shooting from the field, playing a career high 44 minutes, but starved for touches for the most part in the post when his team needed his scoring the most. On the rare occasions that one of his teammates remembered how to make a post-entry pass, he showed good hands, nice strength to establish position and reasonably quick feet making his moves within a few feet of the hoop. When he got to the free throw line, he showed a pretty nice touch with his mechanics, particularly in the rotation he gets on his shot.

If you were to make a highlight reel of every basket he scored in this tournament, it probably wouldnt be much to look at, as almost everything he did involved catching the ball underneath the rim and finishing with either a dunk or layup. Not the stuff legends are made out of, but exactly what he should be doing considering the size advantage he has at this level. Had Wake made any kind of actual effort to get him some looks, they probably wouldnt have needed double overtime to defeat Georgia Tech, and might have had a chance to stick with Virginia Tech for at least a while longer. Part of the problem is that Visser is not the most aggressive guy in the world calling for or demanding the ball, but to his credit, doing so didnt really get him that far.

Now that his season is over, Visser can begin to concentrate full time on his draft stock. He has turned down his invitation to the Portsmouth Invitational Tournament, and will surely be a player that quite a few teams will try to get a look at in private workouts. If he can tone his body to the point that hes maximizing himself physically, he could find a way to work himself into the 1st round. He has the makings of a solid backup center in the NBA, and being just 21 years old and certainly a late bloomer, still has upside to continue to improve.
Read full article

Jonathan Watters
@DraftExpress
Possibly the most improved player in the country up until this point in the season, its stunning to see the type of bulk Kyle Visser has managed to add to his frame over the past 8 months or so, let alone what that newfound weight has done for his all-around game. From a frail, soft and often underachieving backup, who lost his confidence quickly when things didnt go his way, we now find a 255 pound man who has improved his athleticism dramatically, is enjoying taking and dishing out contact, and is producing at an astounding rateincluding a career high 27 point, 14 rebound outing this past week against South Florida.

Now that hes no longer a string-bean, the reason for his appeal seems quite obvious on first glance. Visser is a legit 6-11, and possesses a well-proportioned frame that seemingly should be able to add plenty more weight. He has very good hands and excellent touch around the basket, and surely isnt a stiff when it comes to his athleticism and reflexes. Not freakishly explosive, Visser is still a pretty mobile guy. He runs the court extremely well, and is able to get off the floor to challenge shots or finish on his own. When double-teamed in the post, he doesnt force the issue and knows how to find the open man, and generally shows an excellent attitude on the court and a pretty nice feel for the game, as you might expect from a two-time member of the ACC All-Academic team. As mentioned already, hes not afraid to mix it up even one bit and looked very aggressive on both ends in the three games weve seen of his (Bucknell, Vanderbilt, DePaul).

As you would hope from a player his size, Visser does most of his damage with his back to the basket. He seals off his man well, and is big and strong enough to establish deep position in the post. Once he catches the ball thanks to his excellent hands, he has terrific touch around the hoop to convert from difficult positions, even high off the glassas evidenced by the outrageous 65% he shoots from the field. He knows how to move off the ball and cut to the basket for easy finishes, and his teammates definitely look to get him the ball in a position to score. His footwork in the post is definitely improvable, the mechanics of his jump-hook need work, he could possibly finish a little stronger around the rim, and he at times lacks the balance and a strong enough base to make his consistently take advantage of his shorter matchups, but these all seem like things that a 21-year old late blooming big man can and should improve on.

In terms of a face-up game, Visser doesnt show much if at all in this area. His shooting mechanics from mid-range are not very good and he doesnt have any real ball-handling skills either from the mid-post or out on the perimeter. He shoots only 60% from the free throw line, and this hasnt translated into being able to knock down mid-range jumpers from the footage we saw this year or last.

As a rebounder, hes aggressive and fundamentally sound in the way he boxes out, and therefore is fairly prolificaveraging 9 per game on the season. He isnt quite quick or explosive enough to go out of his area, but the ones he does capture as a position rebounder leave a good impression.

Defensively, he gets baited into cheap fouls at times by being overly aggressive in his rotations. Slashing guards will enter the lane looking for contact, and Visser will often give them exactly what they want by leaving his feet prematurely and drawing a foul. Considering his importance to Wake Forests squad this year (his teammates are young, incredibly inconsistent and are for the most part poor decision makers), that means hes often forced into playing matador defense just to avoid tacking on fouls and leaving for the bench, something that would kill his teams already slim chances of winning any given game. He is able to take advantage of his size and relative leaping ability to block your occasional shot, but this doesnt seem like something that will translate over to the NBA considering the frequency in which he does it against poor competition. What was interesting to see was the way he sticks his hands in to poke away in-bounds passes and come up with stealssomething that confirms the fact that he has pretty good awareness on the court and the reflexes needed to react quickly to things around him.

Nearly halfway through the regular season, were still struggling with the decision of whether to jump on the bandwagon 100% or not. Visser has put up solid numbers against some decent teamsDePaul, Georgia, Bucknell, Air Force, Vanderbilt and Virginia Tech for example, but all of those teams cant be considered anything less than extremely weak in their frontcourt. Visser looks extremely comfortable dominating the 6-8/6-9 centers hes been facing, but we cant wait to see how he does playing against some legit ACC big men. Sean Williams comes to town in exactly a week. Josh McRoberts, Tyler Hansbrough and Brandan Wright follow, as well as Ekene Ibekwe and others later on. If Visser can keep up this type of production through the ACC regular season, it wouldnt be a shock to see him land himself a spot in the first round of this years draft. His team isnt doing him any favors with just how flat out awful theyve been this year, so winning some games in the ACC wouldnt exactly hurt either.
Read full article