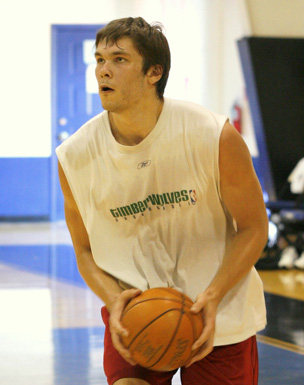 Richard Walker
@DraftExpress
Kyrylo Fesenko had a really nice start to his D-League showcase, showing off a lot of potential in a number of different areas and being fairly productive at the same time. He doesnt appear to be in the best shape, suffering a bit with his conditioning after extended stretches on the floor, but still had himself a really nice game.

Fesenko was pretty aggressive looking to establish position deep in the paint, and Utah (and particularly Kevin Kruger) made it a point to feed him in a place where he can finish with a strong, simple move. He showed terrific hands coming up with a couple of deflected balls not intended for him, and was very active moving towards the ball and making his presence felt. A constant staple of Fesenkos game is the effort he brings to the offensive glass, and today was no exception. He was constantly in the mix for loose balls, using his big frame to the fullest and coming up with a couple of extra possessions for his team in the process, even if these werent always counted directly as offensive rebounds for him.

Fesenko surprised us with two parts of his game in particular that leave a lot of optimism regarding his long-term potential. For one, he made some terrific passes, both from the high post and when doubled out of the low post. He sees the floor nicely from his high vantage point and is extremely unselfish getting players around him involved, always looking to make the extra pass like everyone on this team.

Another was the way he moved his feet defensively. Fesenko is not what you would call a quick player by any stretch, but when stepping out to hedge screens and then recovering back into the post, he did a very nice job. On one occasion he was caught out on the perimeter on a switch and was forced to defend a 6-5 and pretty athletic wing player in Scooter McFadgon. McFadgon took him off the dribble and Fesenko slid his feet nicely matching him stride for stride in fundamental fashion, finally meeting him at the rim and getting off his feet to swat the shot away and then grab the loose ball. Thats a pretty impressive play for a guy that size to make, and should make Jerry Sloan and the Utah Jazz pretty happy.

Fesenko still has a long road ahead of him to become a productive NBA player, but he seems to be off to a really nice start.
Read full article

Jonathan Givony
@DraftExpress
If there was one player everybody wanted to see in Treviso, it was Kyrylo Fesenko. NBA teams, European teams, even ourselves, Fesenko was at the top of most peoples agenda. The Ukrainian big man hadnt enjoyed the biggest exposure playing for Cherkassy in his homeland, and the EuroCamp was a terrific opportunity to get a first-hand look at him.

Unfortunately, it didnt happen, as visa problems restricted him from entering the country. Instead, thanks to Synergy Sports Technology, we got our hands on a Cherkassy game from the domestic league against the Ukrainian powerhouse BC Kiev. A good chance to see Kyrylo in a competitive setting (even if it resulted in a big victory for Kiev) against a high-level squad.

No wonder why everybody wanted to see Fesenko. The guy certainly looks intriguing.

It starts with a remarkable physical/athletic profile. Not only is he a legit seven footer with a nice wingspan, and it doesnt finish with his strong body and solid frame; Fesenko is a pretty athletic guy who actually uses his gifts with a notable level of activity. Hes a high-energy player, even if his flame diminished a little bit in the last quarter, with the game resolved and too many minutes played under his belt.

In terms of skills, were talking about a pure inside guy, a player who doesnt seem to look at the basket unless hes within 10 feet of it. He doesnt seem to consider the possibility of shooting the ball at all, even if he enjoys a wide open position. Its also a rare feature to see him putting the ball on the floor, unless hes evolving in the low post.

For the most part, his production comes in the form of dunks. He moves pretty well off the ball, looking for low-post looks, trying to fill spaces and rolling after setting picks. If he receives it close enough to the basket, he will try to attack the rim regardless of whether theres opposition or not, forcing some fouls in the process. He can comfortably perform one-handed dunks, and for him it seems very easy to get up for the dunk, being quick enough to get the job done before the defensive help arrives.

His obsession for the dunk becomes very obvious when he cleans the offensive glass, as he tries to put back everything that falls into his lap while in the air with a strong dunk. Hes a very solid rebounder, particularly on the offensive end, where he shows nice aggressiveness and a certain ability to avoid the opponents box-out to gain good position. On the defensive end, he sometimes is caught unfocused, not delivering the proper boxing-out effort. Still, he has the strength, athleticism and apparently solid hands to come away with the ball.

Back to his scoring skills, we could also see him once evolving in the low-post in a one-on-one setting. And it was a very solid move, putting the ball on the floor to bang his opponent a little, and then using his left shoulder while spinning to gain room and deliver a short right-handed jump-hook off the glass. Fesenko seems to enjoy at least decent footwork and nice footspeed, but still were not sure about the quality of his jump-hooks, his soft touch and his left hand.

Defensively, hes again an active guy, but the kind of player who looks first for the block rather than to stop the rival with his body. Thats particularly obvious in defensive rotations. Although for the most part, he recognizes when and where to help a teammate, he doesnt seem very willing to take charges to force offensive fouls, and goes directly for the block if he has the opportunity. In many other situations, hes a player that never avoids contact, but he just doesnt seem keen on being rolled over by a rival. Anyway, he enjoys solid lateral quickness, he intimidates thanks to his length and provides a nice effort.

Apparently, enjoying a solid understanding of the game, its hard not to think of other international guys such as Andris Biedrins or Anderson Varejao when trying to project what kind of player he might be able to become in the NBA. Still we dont have enough elements of judgment to formulate a solid enough prediction about Fesenko, although there is more film in the mailConsidering the tools he has at his disposal, it probably wouldn't shock anyone if he ended up landing in the first round.
Read full article

Word on the Street: Redick's Back, Trade Speculation

Jonathan Givony
@DraftExpress
The Pistons were reportedly initially hoping to draft Ukrainian big man Kyrylo Fesenko late in the 2nd round, and asked his agent to hide him overseas with a 2nd round promise so no one else catches wind of him. Fesenko smartened up, though, and decided to make his way over to the States to work out for NBA teams, which likely nullifies his promise by Detroit. He reportedly measured out as a legit 7-footer in one private workout, but still looks like he has a long ways to go skill wise. He has an NBA body with long arms and great raw core strength.

From the tapes weve acquired, its quite obvious that he is very athletic for a player his size, European or not. His quickness is especially impressive, as he's both nimble with his feet but also runs the floor extremely well. His leaping ability is just average, though. The impressive numbers he put up early on in the season in the Ukrainian first division before moving to a new team seem to be in spite of the little coaching hes received, not because of it. His footwork, post moves, and go-to moves around the basket all need serious work, as does his overall feel for the game. He's also not a great rebounder, and his defense is terrible any way you slice it.

Fesenkos really getting by solely on the fact that he's very athletic, plays hard, and is that much bigger than anyone else. He doesn't shy away from contact and definitely has some fight in him.

The best NBA comparison for him would be Mehmet Okur, but he is very far from making a similar impact. His best bet would be to pull out of the draft, go to a better league, and enter the draft again either next year or the year after, as hes only a 1986 born prospect.

Should he stay in, it wouldnt be a surprise to see him drafted somewhere in the 2nd round, as his buyout is reportedly affordable. He wanted to play at the Eurocamp in Treviso, but requested to be added to the camp roster too late and was turned down.
Read full article