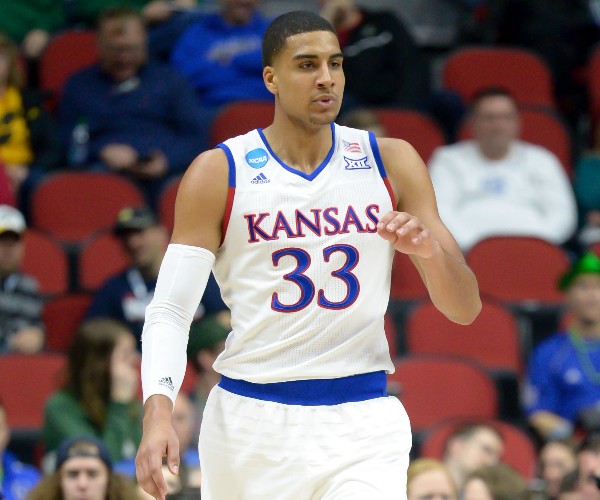 After a redshirt freshman year and two seasons coming off the bench for the Kansas Jayhawks, big man Landen Lucas finally got his chance to start midway through his junior campaign. During this stretch, Kansas went 18-2 and earned in a top-seed in the NCAA Tournament before ultimately losing to eventual national champion Villanova in the Elite Eight.

Lucas is not the flashiest or most versatile player, but he quickly distinguished himself through his defense, rebounding, and intelligence, qualities that have earned him the respect of his coaches and teammates. While scouts likely didn't spend much time thinking about Lucas while he played alongside the likes of Joel Embiid, Jeff Withey, Tarik Black, and Perry Ellis, he now has the chance to build on his breakout junior season and prove himself as a legit NBA prospect in the process. Big 12 coaches certainly noticed his importance to the Jayhawks, voting to give him an All-Conference Honorable Mention nod. 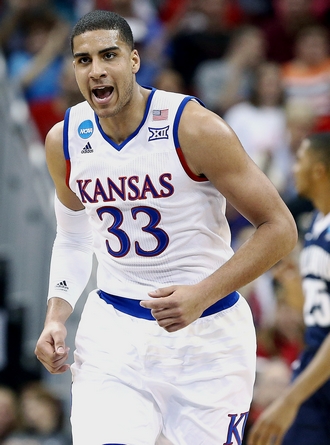 Lucas stands 6'10 with a 7'0 wingspan and a strong 240-pound frame, making him slightly undersized for the center position. While not overly explosive with his ability to play above the rim, Lucas is a highly fluid and mobile big man, light on his feet, and quick to get off the floor.

Lucas' contributions at the collegiate level are reflected in his strong basketball IQ and court awareness, as well as his ability to do the little things. He is not a particularly productive offensive player, averaging 11.8 points per 40 minutes pace adjusted while accounting for just 16% of Kansas' possessions in his time on the floor, but he is a savvy player who manages to make a difference regardless.

Simply put, Lucas is almost always in the right place at the right time, as he knows his role and executes it extremely well. He grabs a solid 4.7 offensive rebounds per 40 minutes pace adjusted, an equal product of positioning himself around the rim and crashing the offensive boards aggressively. Furthermore, Lucas also does an outstanding job of cutting to the basket, executing dribble-handoffs, and finishing around the basket, converting an outstanding 71% of his non-post-up attempts around the rim (SST), one of the best rates in college basketball. Despite seeing few opportunities in the pick-and-roll, he also shows promise, setting quick and solid screens and rolling hard to the basket.

Lucas sees a decent share of his limited offensive looks with his back to the basket, where he does a solid job of carving out space, sealing off opponents and catching everything thrown his way due to his extremely soft hands. While he is not particularly explosive elevating over opponents from a stand-still, he does show competent, albeit basic footwork and the ability to throw in a short-range hook shot with either hand and soft touch. While it's unlikely that Lucas will be called upon to be a major paint presence at the professional level, his ability to take advantage of weaker defenders playing alongside an All-American in Perry Ellis (who drew quite a bit of attention) was helpful for Kansas in Bill Self's post-heavy offense.

Lucas rarely ventures out of the post, offering little floor spacing with his mechanical looking mid-range jumper, which is somewhat of a negative in today's basketball. He did show a really nice feel for setting screens and executing out of dribble-handoff situations, though, almost always making the right read and doing a nice job of getting others involved thanks to his above average court vision.

While Lucas is a limited offensive player at this stage, his work on the other end of the floor is what gives him a chance to carve out a niche at the NBA level.

That starts with his work as a post-defender, where he possesses the strength, mobility, and willingness to absorb contact along with excellent patience, timing, and awareness to hold his own in the post. With that said, he doesn't offer an ideal presence as a rim-protector, as his lack of length and verticality is reflected in his paltry 1.6 blocks per 40 minutes pace adjusted, and he remains somewhat foul prone at this stage in his career.

Lucas' strong fundamentals, technique and timing allow him to offer some versatility defensively to compensate for that off the ball. He moves his feet well on the perimeter and does a great job of guarding different pick and roll schemes, covering ground and using his mobility and smarts to get the job done in his typical no-frills fashion. He's tough to take off the dribble, and does a good job of knowing his opponents' tendencies, often baiting them into difficult looks.

Another place where Lucas unequivocally shines is on the boards, where he pulls down 9.4 defensive rebounds per 40 minutes pace adjusted and 14.1 overall, which ranks him towards the top of prospects in our database.

After primarily backing up NBA prospects for three seasons, stoic Landen Lucas proved himself as an essential member of Bill Self's rotation and became a legitimate NBA prospect in the process. Lucas projects as a starter as a senior and scouts will be watching to see if he build on his junior momentum and show some improvement on the offensive end of the floor, while possibility ratcheting up his intensity level and aggressiveness. While the fact that he is turning 23 years old in the coming weeks likely limits his upside, the fact that he is ready to come in and play a similar role to the one he offered at Kansas as a highly intelligent defender/rebounder will help his cause.

If things don't work out in the NBA, the fact that he speaks Japanese will likely give him the ability to make an excellent living for as long as he wants in a league that already pays huge sums for players in his mold.
Read full article