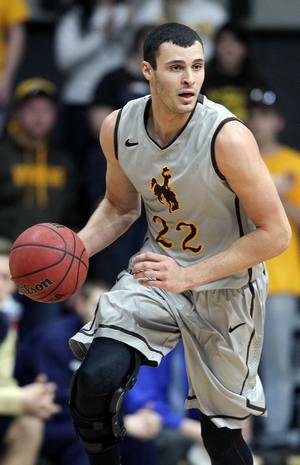 Evaluating the strengths and weaknesses of Wyoming big man Larry Nance as a NBA Draft prospect, with a detailed scouting report video breakdown.

In four years at Wyoming, Larry Nance Jr. put together quite a resume. After fighting through mononucleosis in February and amidst his lifelong battle with Crohn's Disease, Nance was awarded MWC Co-Defensive Player of the Year, along with being named to the All-MWC First Team and MWC All-Defensive Team. Nance led the Cowboys to a 25-10 record, a MWC Championship and their first NCAA Tournament appearance in 13 years. Upon the conclusion of his senior season, Nance became the first Wyoming player since Theo Ratliff 20 years ago to receive an invitation to the NBA Draft Combine. After turning heads at the Combine, Nance may now have a chance of hearing his name called on draft night.See Also: Larry Nance Workout Video and Interview from Chicago

From a physical perspective, it is easy to see why. Standing 6'9 with a 7'2 wingspan and a solid 227-pound frame, Nance has excellent size for the power forward position. He is also a very good athlete  quick, mobile, and explosive  and he wasted little time in regaining his reputation as one of the nation's top dunkers after tearing his ACL in February of 2014.

Nance remains a work in progress on the offensive end of the floor, but he continued to display some intriguing potential during his senior season. He averaged 19.9 points per 40 minutes pace adjusted while showing the ability to score both inside and outside, and emerging as one of the best passing power forwards among prospects in our database.

Nance improved as a jump shooter as well, making 38.8% of his overall attempts. Most impressive is the fact that he made 50.8% of his catch and shoot jumpers. Nance proved to be a versatile shooter for a big man, making 46.9% of his 49 attempts from mid-range and connecting on an improved 34.1% of his 1.7 attempts per 40 minutes pace adjusted from beyond the arc. On film, Nance releases the ball with his left elbow splayed and occasionally fades away from the basket, but otherwise shows decent fundamentals and solid range as a shooter.

He is not, however, a particularly prolific shooter off of the dribble, which foreshadows some of his more significant weaknesses at this level. This is because, for a player who spends so much time looking for the ball away from the basket, Nance lacks the ball handling ability to be effective as a face-up player and only projects as an occasional spot-up shooter with an eye toward the NBA.

On the inside, Nance is more or less the same player that he was a junior. On the one hand, his combination of size, athleticism, soft hands, and good shooting touch allow him to be an impressive finisher catching the ball in the immediate vicinity of the basket. He made an impressive 63.7% of non-post up attempts around the basket while doing an outstanding job of cleaning up his teammates misses, cutting to the basket, and running in transition.

Yet, Nance also lacks much in the way of post moves, and is still only able to utilize simple drop steps, jump hooks, and the occasional and oftentimes wild turnaround jumper. His footwork leaves much to be desired, but his instincts also seem quite raw. Nowhere is this clearer than in the pick-and-roll. Despite possessing all of the physical tools to excel as a scorer in this capacity, Nance struggles to receive the ball out of the screen, where he takes a second to think and loses all of his momentum in the process.

On the defensive end, Nance carved out the reputation as one of the best defensive players on the west coast, making use of his excellent physical tools to the tune of 1.5 steals and 1.5 blocks per 40 minutes pace adjusted. On film, he struggles at times closing out on perimeter shooters and is not nearly as effective as a post defender as one would expect given his physical profile. His 7.0 defensive rebounds per 40 minutes pace adjusted also leave something to be desired for a player whose status as a hustle-guy will play a significant part in his ability to stick in the NBA.

That being said, the tools are there for Nance to develop into a very competent defensive player, as he showed little trouble face-guarding post players outside of the paint, even looking capable guarding bigger wings at times. Improving his fundamentals and awareness, particularly by becoming more consistent guarding the pick-and-roll, will go a long way in convincing scouts that he can crack a rotation at the next level.

There is obviously quite a bit to like about Larry Nance Jr. as a prospect. He has NBA caliber size, athleticism, and grit for the power forward position and overcame adversity to develop into a legitimate NBA prospect. He compares favorably to players such as Louis Amundson who have managed to translate mid-major resumes, low ceilings and high energy into prolific careers. Key to Nance's prospects, therefore, will be proving to scouts that he can improve his consistency as a shooter in workout settings. Nance's prospects have improved with strong workouts, and regardless of what happens on draft night, he should have no trouble finding a home playing at a high level next season.
Read full article

DraftExpress
@DraftExpress
An interview with Wyoming's Larry Nance, featuring footage from his pre-draft workouts in Chicago.

Offensively, Nance was constantly in motion, cutting, sprinting, and hustling non-stop, playing unselfishly and finding ways to contribute without a single play being called for him. Nance's offensive skill-level remains a work in progress and he didn't show the best feel for the game forcing the issue running into brick walls at times, but that goes with the territory of playing in this setting and that is a fairly easy thing to cut out of his game. Players like Lou Amundson have found a way to make a career out of doing the little things Nance displayed in the first game, and continuing along the same path will undoubtedly earn him some more workouts and opportunities to impress NBA teams.
Read full article

The son of former NBA player Larry Nance, Larry Nance Jr's gradual transformation at Wyoming was halted when he tore his ACL last February against Fresno State, ending his season.

The biggest evolution in Larry Nance Jr's offensive game has been in the post, which now makes up over 28% of his offense, according to Synergy Sports. Nance has a strong base, which allows him to established good post position and have success backing his man down. Nance shows an ability to execute a jump hook over either shoulder, and does a good job in recognizing what the defender is giving him, with the ability to perform a strong drop step to seal off his defender in either direction. He also shows early signs of a developing turn around game, although his consistency and overall effectiveness in this aspect is still a work in progress. Nance is also an improving passer out of post-up situations, able to find an open cutter or set three point shooter, which makes it tough for defenders to double team him.

The rest of Nance's offense primarily comes off the ball, on a combination of pick and rolls, offensive rebounds, and cuts to the basket. He has good, soft hands, makes strong cuts to the basket, has a strong upper body that allows him to finish through contact, and has solid explosiveness around the hoop. While his excellent efficiency finishing around the rim will no doubt take a bit of a drop as he goes up against better athletes at the next level, his ability to score without plays being called for him is something that should help his draft stock as teams look at whether he can transition away from being an offensive focal point, a luxury he is unlikely to enjoy at the next level.

An area that it would be nice to see further development from Nance would be as a jump shooter, where he still remains largely inconsistent in his results. He seems to have made strides in making his release and delivery more consistent, and he shoots a good percentage from the line as a big man, but this hasn't yet translated into game action, as he's shooting only 32.1% on jump shots, per Synergy Sports, and hasn't yet show much range beyond 10-12 feet.

One area that has seen considerable improvement in Nance's game is on the defensive glass. Last season was the first one that Nance played without Leonard Washington, who Wyoming lost due to graduation. Washington was a force on the defensive glass, and Wyoming needed Nance to step up in his absence. Nance responded, increasing his defensive rebounds per 40 minutes pace adjusted from 6.6 to 9.2 per game, with his defensive rebounding percentage seeing a similar increase, from a solid 20.4% to 24.8%, both of which represent very good numbers for a power forward. Nance shows a good nose for the ball, with a good understanding of technique and positioning and a good lower body base to hold position. This is part of his game that should translate to the next level.

On the defensive side of the ball, Nance's physical profile makes him a very good post defender, as he has the strength to hold his position and the length, with his 6'8 height and 7'0.v wingspan, to adequately contest shots. He also is pretty quick off his feet, registering 2.8 blocks per 40 minutes pace adjusted, with the ability to contest both his own man and as a weakside help defender. The biggest question mark comes on the pick and roll, as his lateral mobility is only average, and he'll be forced to defend the perimeter far more at the next level than he has at Wyoming.

Larry Nance Jr's evolution as an offensive player has made him extremely valuable for Wyoming, as he has become the focal point of their offense. How much of his post game will translate remains to be seen, but his ability to score off the ball, be a dominant defensive rebounder, and defend the post should give him a shot to make an NBA roster. Whether or not he can regain his explosiveness after his ACL injury will be key to his draft stock going forward, as would his ability to show some consistency in his jump shot, something that he'll certainly need in helping his offensive game translate to the next level.
Read full article