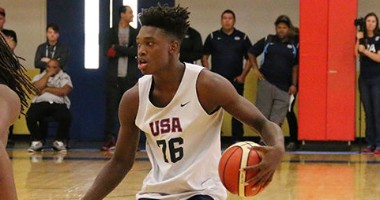 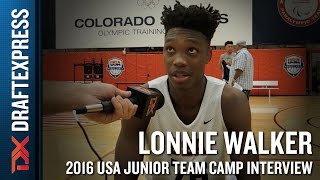 Outlook Shooting guard with a world of talent at his disposal. Still figuring out how to put everything together on a consistent basis. Really struggled at times in the three days we watched him in Colorado Springs. Still dropped some glimpses to remind you just how talented he is. Will need to find a higher intensity level to allow him to utilize his tools more consistently on both ends of the floor, especially when the game doesn't revolve around him.
Read full article

Although he didn't turn in any dominant performances, Lonnie Walker undoubtedly helped himself at the Nike Global Challenge by showcasing his slashing ability, defensive versatility and potential as a future point guard prospect. Physically, Lonnie Walker certainly passes the eye test at 6' 4 with a 6' 9 wingspan and a chiseled frame.

He proved himself as arguably the best perimeter defender in the tournament, guarding multiple positions while constantly making plays off the ball  to the tune of 3.6 steals and 1.6 blocks per 40 minutes pace adjusted.

Walker moves exceptionally well laterally, has the strength to contain most twos and threes his age, and shows tremendous timing contesting and often blocking jump shots off the dribble. Walker made his presence felt on the defensive end, which will earn him minutes immediately wherever he ends up in the collegiate ranks.

On the offensive end, Walker is no slouch either. He's a very capable ball handler who proved comfortable grabbing a rebound and weaving in and out of traffic in the open court. He mixed in several different in and out dribbles and displayed outstanding body control around the rim. Walker shot an outstanding 68.4% inside the arc, in large part thanks to his ability to absorb contact and use either hand around the rim.

While Walker's quickness and slashing ability are certainly a plus, it's his handle and passing instincts that could really help him rise as a prospect. Walker looked very comfortable with the ball in his hands and made a handful of impressive decisions on the move. He can get a little wild at times, but more often than not he played with impressive poise and was able to find both shooters and bigs while on the move.

Walker is able to defend point guards, handle and pass, which at 6' 4 with a strong frame and long arms makes him very intriguing as a point guard project. Walker does have room to grow as a shooter, however. He's capable, especially in mid-range spots, but sports a wide stance and somewhat stiff release  although he did shoot 45/125 [38%] from three in the EYBL and Nike Global Challenge, according to our database.

Although his shot still needs some work, Walker proved himself as a strong two-way guard with potential to develop into a point guard down the road, making him a very interesting prospect to track as he continues to develop.
Read full article