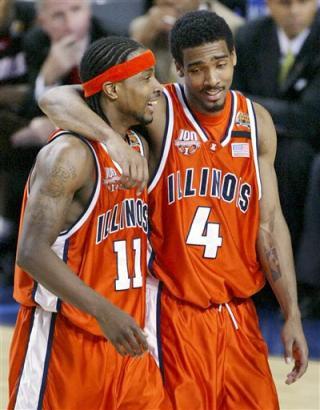 Eric Weiss
@DraftExpress
Overview: An undersized shooting guard who needs to improve his consistency and efficiency to take his game to the next level. Displays good quickness and speed. Doesnt have great strength for a guard, which makes him a liability defensively against taller opponents. Could really stand to develop his point guard skills, but Houston already has plenty of players at that position. Has put up solid scoring numbers, but has seen his minutes decrease in 07/08. Didnt have to play point guard at Illinois with Dee Brown and Deron Williams handling all of the minutes there.

Offense: A solid shooter who gets about half of his attempts from behind the arc. Perimeter jumper has been his staple since college. Hasnt had much of a problem expanding his range to the NBA 3-point line. Great catch and shoot player. Average ball handler. Likes to take the ball to the rim since he doesnt have the explosiveness to get separation in the midrange. Not great at running the pick and roll. Can turn the corner, but is usually forced to give up the ball. Not a great distributor. Wont make bad passes or turn the ball open often, nor will he set up teammates. Doesnt go to the line at a high rate, but shoots a very good percentage from the stripe. Wont crash the offensive glass. Needs to work on his point guard skills. Has found himself as a shooter, but would be a better fit if he could see some minutes at the point.

Defense: A solid defender who shows a good work ethic to compliment his above average athleticism. Has a tough time when asked to guard taller perimeter players, which makes it difficult for him to play the 2-guard spot at times. Cant contest their shots due to his lack of ideal size. Capable of defending the point guard spot better. Good lateral quickness, but isnt always be able to stay in front of smaller guards. Shows consistent effort. Wont take a lot of risks, and for that reason he wont make many mistakes. A nice option who brings energy, but doesnt have the physical traits to be a dynamic defender.
Read full article