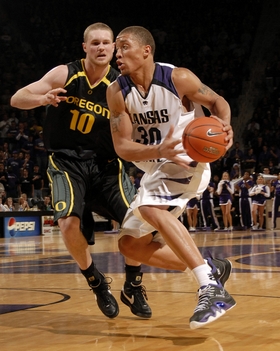 Mike Schmidt
@DraftExpress
Leunen showcased what he can bring to the table as an NBA role-player today. His shot was on for the first time in a while, and he took full advantage, knocking down catch and shoot jumpers from all over the place. The young forward doesnt force anything, opting to wait for an open opportunity. He did get to the rim on one occasion today, but that probably isnt something hes going to be able to do consistently on the NBA level. On his one drive, he tossed up a weak floater, showing that he simply isnt used to finding himself in this position. In the post, Leunen did a good job of using fakes to get contact and go to the line, where hes very consistent. While hes not an NBA level athlete, Leunen just might be able to become a nice NBA role player down the road.
Read full article

Mike Schmidt
@DraftExpress
Leunen had a very good game today showing that he is a capable role player at this level. He knocked down his midrange jumpers with consistency, but struggled mightily from three. Leunen has the form to be a very good outside shooter, and just needs to acclimate his game to NBA range. His basketball IQ shined through on a couple of occasions, especially in the final play of the game where his backdoor cut earned him a reverse lay-in and a win for his team. His ability to handle the ball for a bigman is a nice asset, and while hes not athletic enough to do anything with it, he takes care of the ball and doesnt miss the open man. Defensively, hes a definite liability due to a lack of lateral quickness, but will work hard to grab rebounds. Leunen has a shot at being an end of the bench role player, but seems like he could be a nice player overseas too.
Read full article

Jonathan Givony
@DraftExpress
Maarty Leunen is never going to stand out in a setting like this, as there will always be bigger, more athletic players to ooh and ah over, but he once again showed his toughness, smarts and terrific skill-level by knocking down the shots that were presented to him, running the floor hard, competing on the defensive end, doing an excellent job on the glass, and not making even a single mistake. He finished with 11 points and 9 rebounds in 20 minutes
Read full article

Joey Whelan
@DraftExpress
Maarty Leunen has really hit his stride for the Ducks this season, as his production and efficiency are up across the board. One area that really stands out for Leunen is True Shooting Percentage, where hes up from 59% to 68% this season, which is good for fourth among all draft prospects in our database, and hes doing it against strong competition in the Pac-10. To put that in perspective, there is only one player in the NBA averaging at least 20 minutes per game with a True Shooting Percentage of 68% this season, that player being Portlands James Jones.

Leunens outstanding three-point shot has a lot to do with his scoring efficiency, as hes shooting a career-best 46% from behind the arc thus far. His shot boasts a very quick release with good height and textbook form, while he isnt phased when he has a defenders hand in his face. Also, he regularly will step back to NBA three-point range, where his shot is just as effortless and effective.

As for the rest of Leunens offensive game, he relies heavily on a hybrid dribble-drive/post-up game, where hell put the ball on the floor from behind the arc, take his man down to the mid block, turn his back to the basket, and quickly go into a mini right-handed hook shot or a fade-away jumper. This works very well for Leunen, as he doesnt have the strength to really back his man down in the post, and he doesnt have the vertical explosiveness to take the ball to the basket and finish going into opposing defenders, so this method allows him to consistently score while not exposing his weaknesses. Leunen will also finish some of his dribble-drives on a right-handed floater in the lane, which hes also effective with. Leunens ball-handling isnt anything to write home about, but he does a good job getting past his man using the threat of his jump shot, and can go both right and left, though he heavily favors his left, despite being right-handed.

As aforementioned, Leunen doesnt really have the strength to body up in the post, nor the size or explosiveness to finish over opposing big men when matched up. When he does work on the low block, hes at his best with moves fading away from the basket, such as hook shots and turnaround jumpers. Leunen does finish at the rim fairly often, though, by using his excellent basketball IQ to cut without the ball and adeptly find open lanes to the rim, where he catches and finishes with his soft hands and soft touch around the rim. He even can get crafty around here, going reverse off the glass to avoid defenders when necessary.

Leunen is also strong on the glass, where he consistently boxes out with good fundamentals and shows good timing and pursuit for rebounds. On the defensive end, Leunen also shows a good fundamental base in the post, and will really work to force the opposition into tough shots, but hes prone to being beat by bigger and stronger opponents, as he can be backed down or shot over often. On the perimeter, Leunen also puts in a good effort and looks fairly competent when forced out there, but he can be beat here, too, by better athletes, and can be targeted on this end of the court in general, something thatd be even more of a problem at the next level.

Leunen has definitely improved his case for being an NBA prospect this year, with his improved efficiency and production and continued hard work and smart play (hes also a very good passer for a power forward), but he still has a lot of things working against him, most notably that he isnt very strong or athletic, and he doesnt have a frame that looks like it can naturally add much more bulk. Hell have a chance to prove himself at the pre-draft camps this summer, and his exceptional outside shooting is a skill that will definitely get him some looks, but how the rest of his game holds up against stronger competition will likely be what determines his future in the league. If he doesnt make it in the NBA initially, his game is very well-suited for the European game, where he should have a very successful career.
Read full article

Joey Whelan
@DraftExpress
The glue guy behind Oregons surprising run to the Elite Eight of the NCAA tournament last year, Maarty Leunen continued to make small, but steady strides on his way to becoming a very reliable and much needed big man presence on a team dominated by trigger happy wings. His willingness to do the little things for Oregon as well as his ability to spread the floor was one of the most important factors in his team having as much success as they did all season long. This year Leunen will be expected to continue to do much of the same, while possibly shouldering slightly more offensive responsibilities for a team that graduated its #1 scorer.

Leunens strengths as a basketball player are very specific. For one, hes a phenomenal shooter (41.4% from behind the arc), particularly with his feet set, and even has some ability to pull up off the dribble from mid-range. He has beautiful form on his jumper, complete with a quick release and outstanding touch, and if left open on the perimeter, will usually knock down his shot more often than not.

Leunen is also a very smart player who understands the game and is willing to do the little things to help his team come away with a victory. Hes an excellent passer, sets solid screens, moves off the ball intelligently, and rarely makes mistakes. On top of that, hes a tough guy who competes for rebounds, understands angles and does not give up space to opponents in the post, making him a fairly solid defender despite his physical shortcomings. Hell regularly make big plays that have the potential to be the deciding factor in a close contesta heady tip-in while hitting the offensive glass, a sneaky rotation into the paint to draw a charge, a fearless dive onto the floor to come up with a loose ballall the typical clichés apply here very well in this instance. College basketball lives for them in fact.

The problem is that Leunen has some shortcomings physically that make his transition to the NBA seem a bit questionable. Hes not particularly tall, nor strong, often getting outmuscled in the post by bigger post players. Hes also a poor athlete, especially in terms of his leaping ability, which is very noticeable in the paint when he attempts to finish in traffic. While hes an excellent shooter facing the basket, hes not particularly gifted with his back to the hoop, showing underdeveloped footwork and clearly favoring his left hand. He can put the ball on the floor, but is again predictable favoring his left hand. Defensively, while he competes extremely hard and generally gets the job done at the collegiate level, there are some question marks about how his combination of size, strength and lateral quickness will hold up at the next level.

Leunen projects as a Brian Cardinal face the basket hustling power forward at best, or as an Ivan Radenovic-type overseas gem at worst. He has the possibility to acquire a Dutch passport if he so pleases because of his heritage, although he might have to give up his American citizenship in the process. Regardless, he will make a very nice career playing professional basketball, regardless of the route he takes.
Read full article