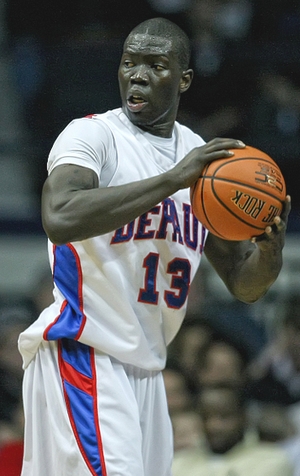 After testing the NBA draft waters last spring, Mac Koshwal wisely made the decision to return to school and continue his development, and hes seen his production and efficiency rise slightly this season, after doing the same thing in his sophomore season. While Koshwal continues to show gradual improvements, the same can unfortunately not be said for his team, as DePaul is amidst yet another disastrous season, being just 1-14 in conference play thus far, despite being very competitive in most of their losses. Koshwals injuries havent helped matters at all, as he missed 8 games early in the season due to a right foot injury, and then another four with a left foot injury in January.

Koshwals attractiveness lies mostly in his physical profile, being a long-armed, lively 6-10 big man with a great frame and strong rebounding ability. Players of his nature are fairly rare amongst the college ranks, and are good candidates to develop into role-playing rotation types in the NBA and/or an extra body in practice.

While its unlikely that hell develop into any type of offensive option in the NBA, its worth noting that Koshwal continues to improve on this end. He has a pretty unique style of play, spending a lot of his time operating out of the high post, where he can take his man off the dribble for straight-line drives to the rim going in either direction, using a pretty good first step and very long strides to get separation.

His dribble, while not the prettiest thing in the world, is pretty controlled in space when he doesnt have to do much changing of direction, though things get shakier in other situations. He shows flashes of advanced moves like spins and behind-the-back dribbles, but he doesnt have great control over the moves and they usually wind up getting him into trouble.

While Koshwal shows interesting ability to attack from the high post area, he doesnt always convert it into high percentage shots, as he has a tendency to rush runners and hook shots in the lane, which he shows inconsistent touch on.

Taking the ball all the way to the basket, Koshwal really lacks the vertical explosiveness to finish strong there, seeing his shot blocked pretty often when dealing with a weakside shot blocker. That said, his ability to finish with either hand combined with his ability to separate on straight-line drives and his willingness to draw contact allow him to be pretty effective in this regard at the college level, though there are questions about how it will translate to the pros.

In the low post, Koshwal shows similar intriguing skills, having very good mobility and fluidity in his moves, being able to finish with hook shots and crafty reverse moves on occasion, but he still lacks a bit of polish and is inconsistent with his execution. His lack of explosiveness hurts him here as well, as he struggles to get separation against long defenders at times, which will be more of a problem in the pros.

Koshwal shows flashes of a mid-range jumper, which he likes to use out of the high post on occasion, but he isnt especially accurate with it, and his 58% FT% gives a pretty good indication of where he is as a shooter overall. Koshwal has done a better job with his passing this season, however, showing good vision out of the high post at times, kicking the ball out to three-point shooters when the defense collapses. His turnovers are quite high given the number of possessions he uses, but thats more an indication of his shaky handle and the attention defenses pay him than it is an indictment of his passing.

It should be mentioned here how incredibly awful Koshwals supporting cast is, as it makes things very difficult for him to generate offense, with defenses often paying heavy attention to him. Only one player other than Koshwal averages more than 6.7 points on the entire team, and that player is shooting a horrendous 37% from the field. Koshwals teammates arent especially adept at creating for others either, with Koshwal being required to create most of his own offense, a large burden for a player who obviously still needs some more polish. All in all, Koshwal wont expected to be much more than a big body at the NBA level regardless, so his lack of polish isnt that much of a concern when projecting him to the role hell play.

One area where Koshwal does excel is the glass, especially the offensive end, where he pulls in 4.3 offensive boards per game. Koshwal has a relentless motor on the glass and has no problem throwing his body around, as weve previously documented. This is probably the most attractive part of his profile in fact when projecting him to the NBA level, as players of his nature arent always that easy to find, at least not for the minimum.

Defensively, Koshwal has a pretty upright stance on the perimeter, and doesnt seem to put in full effort moving his feet, which probably makes his lateral quickness look worse than it could be. On pick-and-rolls, he looks completely out of sorts, usually making peculiar decisions and not really putting in full effort most of the time. In the post, he doesnt get great leverage and his fundamentals could probably use a little work, but he does put in a better effort level here. On the weakside, he really is not much of a threat blocking shots due to his lack of explosiveness, but he does show a terrific ability to anticipate post-entry passes and come up with steals.

Looking forward, Koshwal has clear-cut role for himself defined at the NBA level, and hes improved each season at DePaul on top of that. Hes not particularly skilled or athletic, though, and may demand more patience and hard work than most teams prefer in order to develop him into a useful NBA player. That said, he has good size, an excellent motor, and clearly is trying to learn and expand his game, all things a team could find attractive.

The biggest problem Koshwal has is that while he probably needs more time to develop before entering the NBA, hes in an incredibly awful situation at DePaul where it is extremely tough for him to develop. Even if he isnt drafted, a year in the D-League or in Europe will likely do him more good than another season at DePaul, so itd be hard to fault him for coming out early. Since he already entered the draft last year, he no longer has the option of testing the waters at this point. The injury problems hes endured this season are another thing to keep in mind, as players of his nature dont always have the longest shelf life, and there is only a certain amount of earning potential his body might have.
Read full article

With an 8-23 record including a dismal 0-18 mark in the Big East, there was very little to cheer about for the DePaul Basketball team last season. Despite the struggles, the one silver lining for the Blue Demons came in the emergence of Mac Koshwal. A relative unknown on the national scene, Koshwal has impressed the DePaul faithful for the past two seasons with his physical play and great knack for the ball. After testing the NBA waters this past spring, Koshwal decided to return for his junior year with the hope of turning things around for his team while improving his draft stock as well.

Koshwal is 610 245 pounds and uses his great frame to the best of his ability. Hes a space eater inside and plays hard and aggressive every night, regardless of what the scoreboard says. Those characteristics along with his high motor contribute to his efficiency as a rebounder and his knack for rebounding in traffic. Koshwal pulled down 9.6 rebounds a game last season including 3.8 on the offensive end in 32.1 minutes a game  further illustrating his excellence on the boards.

His fundamentals are outstanding, as he makes a concerted effort on every possession to box out and chin the ball  making it difficult for the ball to be taken away. All of these skills are important for Koshwal as he doesnt possess the worlds greatest athleticism, lacking great explosion and lift.

This lack of athleticism affected his ability to finish around the basket on put backs, but even more so in the post. He shot 54.4% on opportunities around the basket on 5.4 attempts a game, and only 31.5% on shots in the post on 2.5 attempts a game. He has a tendency to rush his moves inside and flip shots up at the rim as opposed to gathering himself and going up strong. When he's patient, he becomes a more productive player.

This is certainly true when he plays with his back to the basket, where his post game is a work in progress. Hes shown glimpses of advanced moves and good footwork, showing up and unders and quick spin moves  although those plays are few and far between. He prefers to face up, using inside pivots to power his way to the hoop or beat his guy off the dribble. He does a fairly good job of getting where he wants to go, but as mentioned earlier, he must improve his ability to finish.

Another area in the post where he struggled was with his passing. He had a negative assist to turnover ratio last season of 1.5 assists to 2.7 turnovers  often forcing passes cross court and in traffic. With that said he does possess some guard skills and is not afraid to dribble behind his back or spin past his defender on the perimeter.

He also showed a nice shooting touch from the outside as well, albeit on few attempts. Currently his range extends out to 17 feet and shoots the majority of his shots off the inside pivot or spot up opportunities. Further enhancing his consistency as a shooter will surely open up more options for Koshwal on the offensive end.

On the defensive end, Koshwal has a difficult time coming away from the basket. He lacks great lateral speed which hinders his ability to prevent dribble penetration. His pick and roll coverage when defending the screener leaves a lot to be desired as well, as he often sags back into the lane  forcing switches to occur resulting in mismatches. In the post, he fails to meet his man early which allows his opponent to gain solid position. On the catch, he does a fairly good job of playing physical and using his hands to strip the ball away, averaging 1.3 steals a game accordingly.

With more experience this season, DePaul will look to erase last years memory and restore a certain level of competitiveness back in the program. With Dar Tucker out of the picture this season, its time for Koshwal to be the featured player. If he can improve his scoring around the basket and establish more of a post up game, look for the Blue Demons to put up more of a fight in 2009-10.
Read full article