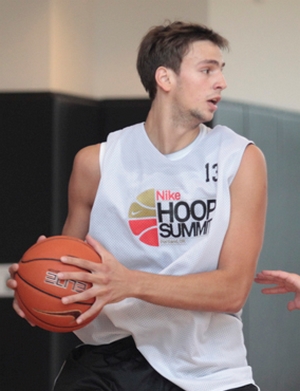 Scoring 4 points and pulling down 7 rebounds for the World Select Team, Argentinian forward Marcos Delia showed both the good and the bad of his game throughout the week in Portland.

Standing 6'10 with a frame he's added some 15-20 pounds to since we saw him last summer at the FIBA U-19 World Championship, Delia has impressive size for a big man. He does not, however, possess great athleticism. He runs the floor fluidly for a player his size, but is not explosive enough to finish above the rim consistently.

What Delia does have is a few unique tools that could serve him well as he begins to develop his somewhat raw overall skill-level on the offensive end. He's a smart player who moves well without the ball, shows good timing crashing the glass, and understands how to be in the right place at the right time to give his teammates a target around the rim. When he receives the ball, he shows the ability to finish with either hand. Despite that, Delia is a less than reliable offensive option at this point, struggling with the touch on his unrefined post-moves, the range on his jumper even when inside the foul line, and his toughness finishing through contact.

Defensively, Delia did not stand out, but did a good job understanding the limitations of his opponents, playing off opposing bigs to bait them into shooting a jumper he often still managed to contest thanks to long arms, and pursuing the ball off the rim. He's also a solid rebounder. He'll need to become more physical down low to better take advantage of his rapidly improving frame as he lacks lateral quickness away from the rim.

Delia's frame, basketball IQ, ability to run the floor and finish on both sides of the rim are a plus, but he'll need to improve the rest of his offensive arsenal an learn to play with strength in order to take the next step as a prospect. Despite his limitations, Delia is one of the top prospects playing in South America at the moment, and at the very least ha a great future ahead of himself in Europe.
Read full article

Marcos Delia, arguably the most important player on an overachieving Argentinian team that reached the championship's semifinals, looks like a player who will surely be able to play professional basketball at a high level down the road.

Standing 6-9, with a nice frame and long arms, Delia has good physical tools for a big man -- even if he's not overly explosive around the basket.

Delia combines fluidity with a great basketball IQ. He shows the ability to score inside with either hand and has very good court vision, finding the open man out of double teams. He showed nice timing crashing the glass at this competition, and was especially impressive in the quarter and semifinals, scoring 16 and 19 points, respectively.

With that said, Delia must improve his skill level and his ability to handle contact in the paint. He wasn't particularly efficient at this competition, making just 45% of his 2-point attempts. He also doesn't show much range on his jumper. He has a long ugly release, and he made just 9 of 20 attempts from the free throw line.

If Delia can continue to add polish to his game and show he's tough enough to defend his position at a high level, he'll have many opportunities to leave his home country for opportunities abroad down the road.
Read full article