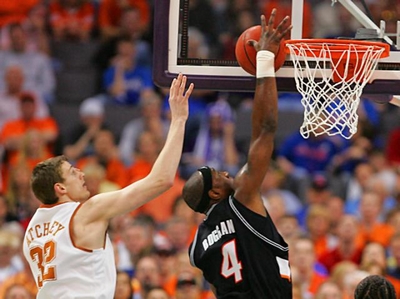 Mike Schmidt
@DraftExpress
IWhat is certain is that Boggan is surely this years top rags to riches story. Having endured as tough an upbringing as anyone youll find, Boggan bounced around some of the top high schools in America (Mount Zion Academy, Oak Hill, Hargrave Military Academy) before landing at the University of Florida as a consensus top-50 recruit. He weighed over 300 pounds at that point and spent one lackluster season under Billy Donovan before deciding to transfer to St. Bonaventure. Boggan never played a game there and eventually ended up at Chipola Community College in Florida where he shed over 60 pounds to currently sport a chiseled, powerful frame that has been punishing opposing frontlines all season long for his present team, nationally ranked Oklahoma State.

25 points, 10 rebounds at Auburn, 21 points, 8 rebounds at Madison Square Garden against Syracuse and 20 points, 6 rebounds at Tennessee were all just preludes to his coming out party against Aaron Gray and Pitt, where Boggan put on an absolute masterpiece in helping take down the top-10 ranked team, on national television in double overtime. He finished with 30 points and 9 rebounds, knocking down 12 of his 14 free throws in the process.

Looking at the success of similar undersized post warriors in the NBA these past few yearsUdonis Haslem, Kenny Thomas, Ryan Gomes from the past few seasons for example and Craig Smith and Paul Millsap just from this last years draftall underrated players with terrific college resumes but little hype due to their perceived lack of upside, its getting tougher and tougher to exclude Boggan from NBA discussions considering his status as a legit candidate for first team All-America honors.

Boggan displays everything you look for in a modern day power forward, minus possibly a few inches. He is a man inside the post thanks to his chiseled frame and fantastic footwork, attacking the basket with reckless abandon and showing some of the best scoring instincts youll find among NCAA big men.

He has a complete arsenal to work witha turnaround jumper, fade-aways, the drop step, amazing touch, gritty toughness and a motor that does not quit. Play him straight up and hell use his strong base to back his man down and then convert at a superb rate. Take away his right and hell gladly spin off to his left, finishing strong at the hoop. Boggan isnt particularly explosive vertically, but he has a counter to every counter and he takes exactly what the defense gives him, demonstrated by his terrific 62% field goal percentage, on track to stand as the all-time leader in this category at Oklahoma State. He also shoots an outstanding 79.5% from the free throw line. That stat tells you a little bit about his face the basket game, which looks pretty promising for a player at his position and could surely ease some doubts about his NBA potential. He has a capable, although not yet super-consistent, jumper out to the college 3-point line, and he can put the ball on the floor fairly confidently and make his way to the basket. He gets his shot off with nice mechanics and a high release point, making it particularly hard to block.

Defensively, Boggan is fairly fundamentally sound, knowing how to make solid rotations and hedge screens on pick and rolls. Hes not the best man to man defender due to his lack of height and outstanding lateral quickness, but as always he plays hard and does not give up on plays. As a rebounder he has a good nose for the ball, being a right time at the right place type of player, and his fantastic hands and aggressive demeanor usually do the rest.

Boggan needs to continue to produce at a high rate and take his team as far in the tournament as he can to have the best shot possible of being drafted. Another thing he has in common with the Haslems, Millsaps and Craig Smiths of the world is that hes not considered a top prospect by any stretch, but the success of those who came before him could very well stick in the minds of NBA decision makers as they start moving into the late first round or somewhere in the 2nd. A dominant performance at one of the pre-draft camps, Portsmouth or Orlando, could go a long way in swaying them. He is more than capable of doing so.
Read full article