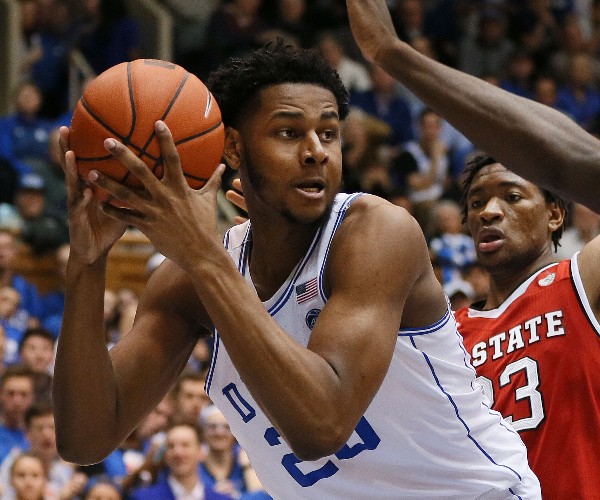 Bolden didn't make much of an impact on Saturday, picking up four fouls in just 13 minutes of action, but he made his presence felt throughout the week of practices. That started with his eye-popping measurements, which put him in an elite class of center prospects.

Bolden's tools are a little more impressive than his production at the moment, starting with his long arms, huge frame, soft hands and solid mobility. 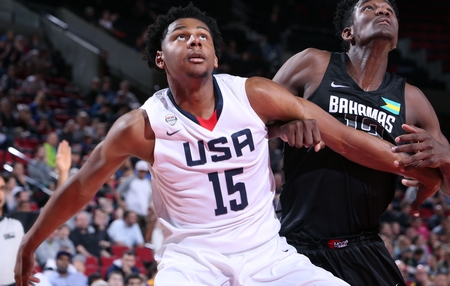 He's mostly a catch and finish guy offensively, sealing off effectively using his strength, being a super reliable target off cuts and pick and rolls, and capable of finishing above the rim impressively in space. He rebounds well, even out of his area at times, for the same reason, even if his intensity level comes and goes at times in that regard.

Defensively, Bolden will have somewhat of a transition to make at the college level, even if he has the potential to be very solid here in time, indeed already showing some flashes of effectiveness in small spurts. He is a little bit lazy getting back at times, running the court lackasidically, and doesn't always play on the balls of his feet in the half-court. Better effort will help, as will experience and coaching learning the many principles big men need to know. He's not as much of a rim protector as you might hope at times considering his length and reach, and is just an average defensive rebounder as well.

It's very difficult to find centers in Bolden's mold with his combination of physical tools, skills and solid basketball IQ, even if he's a long ways away from reaching his full potential. Some of that will come with learning how to play at maximum intensity on every possession, which will hopefully come in time with better coaching and the higher level of competition (and demands) of college basketball.
Read full article

As impressive as Allen's measurements are, Bolden's are perhaps just as jaw-dropping. Already bigger than exceptionally long multi-college season NBA players like Cole Aldrich and JaVale McGee, few players in our database share Bolden's combination of length and strength. He has some work to do on his frame, but given he has one of the top-20 or so wingspans and standing reaches ever recorded in our database, it isn't hard to guess what makes Bolden such a highly regarded recruit and long-term prospect. From a sheer height and length perspective, Bolden is most similar to DeMarcus Cousins who was measured at 6'10.75 in shoes with a 7'5.75 wingspan at the 2010 NBA Draft Combine, albeit with a heavy 292-pound frame he's cut weight from in the NBA.
Read full article

Strengths
-Has impressive physical attributes. Measured between 6'10 and 6'11 with shoes in different settings, with a 7'4 wingspan. Has a strong, well-proportioned 254 pound frame
-Mobile player
-Has very good scoring instincts. Can score with either hand in the post using decent footwork and soft touch
-Has good hands and is a solid finisher off two feet.
-Has a nice looking stroke from mid-range. Should be able to develop this part of his game in time
-Shows very nice potential defensively. Stepped out on the pick and roll and moved his feet impressively. Can block shots using his very long arms

Outlook: Very talented big man who is highly productive on both ends of the floor. Considered by most to be the #1 or #2 center in his class. Had a strong mini-camp in Colorado Springs, likely cementing an invite to the Nike Hoop Summit.
Read full article

Highly touted center Marques Bolden played only 10 minutes (two games due to injury) all tournament but made his presence felt with a few highlight plays that gave a glimpse of what he'll bring to the table at the college level.

At 6' 11.5 in shoes with a 7' 3.5 wingspan and a solid, 240-pound frame, Bolden has tremendous size and length for a center prospect. Although his running style isn't all that fluid (was playing with two knee pads), Bolden can get up and down, cover ground, and play above the rim.

He's not overly tough defensively, but he proved he's more than capable of altering shots both as an on ball and weak side defender. Bolden doesn't have elite, fast twitch instincts, but he's very mobile and has the foundation to be a solid defensive anchor.

Offensively, while Bolden isn't overly polished, he made a few impressive plays both in transition and the half court. He showed impressive body control and leaping ability to catch a lob in transition while on the move to hammer it home. Bolden also dropped in a left-handed jump hook over length. Most of his damage was done on the offensive glass, as he displayed a high motor and level of physicality on the O-Boards.

We only got a taste of Bolden's game due to his limited playing time at Nike Global Challenge, but in that time he proved there's a lot to like about the 17-year-old center from DeSoto, Texas.
Read full article