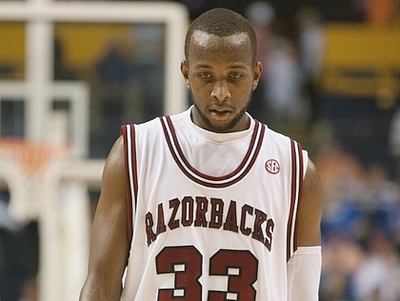 Though Arkansas underachieved throughout the 2009-2010 season, power forward Marshawn Powell emerged as one of the SEC's best freshman, averaging 14.9 points per game on 50% shooting. Now a sophomore and no longer flying under the radar, Powell will face higher expectations while shouldering a larger role in Arkansas's struggling offense.

Powell has less than prototypical tools for an NBA prospect, as he's undersized for a power forward, standing 6'7 with just a 6'9 wingspan. He also must get stronger and add some muscle to his lean 225-pound frame. He is a good athlete, however, both explosive around the basket and quick in the open floor.

While undersized, Powell entices from a scouting perspective due to his diverse skill set. He does not have the greatest footwork and must develop some countermoves, particularly with his left hand, but he has good touch around the basket and is a hard worker in the post. Powell is both quick and nimble, capable of finessing his way into the lane and getting to loose balls around the basket. Whether or not he can be effective against bigger and more athletic players is unknown, however, and he was less than impressive in match-ups against NBA caliber frontcourts such as Kentucky and Baylor. He also needs to limit his turnovers in the post by learning how to pass the ball out of coverage.

Moving away from the basket, Powell showed the ability to take perimeter jump shots. His mechanics are inconsistent, particularly with a hand in his face, but he has a quick release and shows good range for a big man. He needs to prove to scouts that he can develop into a reliable floor spacer at the next level and improving upon the 21.6% he shot from behind the NCAA 3-point line last year is a step in the right direction.

Powell has a good first step and an array of fakes that allow him to beat his man off of the dribble. While his ball-handling abilities need work, he is well above average for a big man. He even has some advanced moves that allow him to showcase some raw, but intriguing potential as a scorer from mid-range and an inconsistent, though far more convincing, slashing game. In addition to working on his handle, Powell must also improve his balance, as far too often he lost control while slashing to the basket last season.

On the defensive end, Powell is less than impressive and collegiate big men constantly outplay him inside and outside. He has above-average lateral quickness and is able to stay in front of his man, but his overall awareness, focus, and fundamentals are severely lacking. He is also a mediocre rebounder, averaging just 5.3 defensive rebounds per 40 minutes pace adjusted.

As a prospect, Powell is a mixed bag despite the impressive production that he amassed last season. He will turn 21 years old as a sophomore and it is unclear how much upside he has left at this stage. If he can further develop his skill set and make a greater effort on the defensive end, however, then he should be considered a legitimate NBA prospect. Continuing to improve while playing for a rebuilding team without a proven point guard will not be easy, but Powell has much to perform better against NBA caliber big men before he convinces scouts that he can play a role as an undersized power forward at the next level.
Read full article