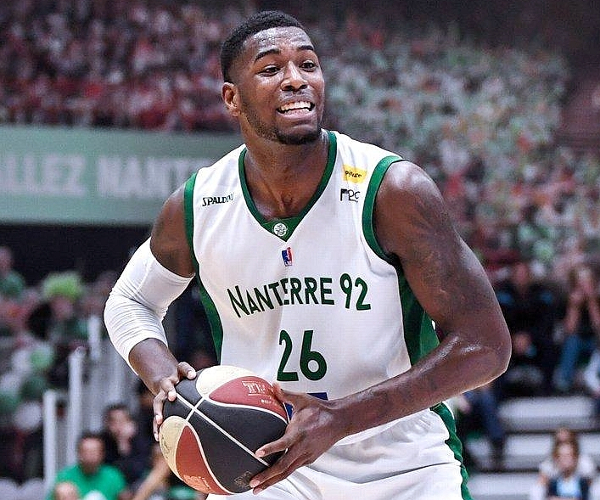 At 19-3 in the French league, and 12-2 in the FIBA Champions League, Monaco is one of the best teams Lessort will play all year, making this an ideal game to evaluate him.

At 21-years old, Lessort is automatically eligible for the 2017 NBA Draft, and is in the midst of a very strong season, averaging 18.5 points, 13.2 rebounds, 2.2 blocks and 1.4 steals per-40 minutes. He ranks fourth overall in PER in the French League, and is also Top-10 in PER in the FIBA Europe Cup, where his team recently advanced to the semi-finals.

Lessort has steadily progressed throughout this season and is making significant contributions to his team, who are 16-6 in the French league and currently tied for second place. Hes playing some of his best basketball as of late,  posting a combined 35 points and 18 rebounds in 55 minutes in the home and away playoff quarterfinal series in FIBA Europe Cup against Usak from Turkey this past week.

Playing with a huge motor, Mathias shows impressive physical tools, playing above the rim with the ease and having great speed in the open court and pick and roll.

Lessort is a bit undersized for a center and doesnt show the type of scoring range or playmaking ability from someone who might play some power forward, even if his intensity level and length on defense does help ease some of those concerns. The way the NBA game is trending will certainly benefit him, as teams are far less reluctant to use 69 centers as in the past, especially one with Lessorts bulk.

Once the NCAA Tournament comes to a close, NBA teams will likely head to France in great numbers to watch how he finishes his season and compare him with the many big men prospects hell stack up against in the Draft. Lessorts season will likely go well into May and possibly June, which will prevent him from doing as many workouts as some teams might hope. Considering the role he plays in a strong league like France, in a very comfortable scouting location such as Paris, as well as his success in European competition, NBA scouts will have plenty to work off of.
Read full article

Getting to Know: Mathias Lessort

Mathias Lessort has been on our radar for some time now, already getting his first writeup on this website five years ago, as a raw 16-year old. Many scouts flocked to get an early read on his teammate Clint Capela back then, who is a year and a half older than him and was eventually drafted in 2014.

Somewhat stuck in Capela's large shadow at Chalon, Lessort is finally having his breakout year after having moved to Parisian-based Nanterre this past summer, where he's getting rave reviews from the coaching staff. He's enjoying considerably more playing time, up from 12 minutes per game to 22 in the French league, while starting nearly every game in domestic play as well as in European Cup action.

Lessort is posting very similar production on a per-40 minute basis compared to last year, at nearly 18 points, 13 rebounds, 1.6 steals and 2.1 blocks, almost exactly what he did last year. The difference is that he's now doing it against starters and across 22 minutes per game, as opposed to just small doses versus backups, making you wonder why he didn't get more playing time last season.

In fact, Lessort's 24.2 PER is third best in the league, and he ranks #1 in per-minute offensive rebounding. His production thus far dwarfs that of any player under the age of 22 in this league in the past 12 years, including every French player who was drafted during that period.


From a physical standpoint, there's a lot to like about Lessort's profile. He has decent size at around 6'9, boasts a NBA ready frame (listed at 246 pounds), and possesses a solid 7'1 wingspan that allows him to play slightly bigger than his height. He's also a very good athlete, light on his feet, capable of sprinting the court with impressive speed, and being extremely nimble and agile with his movement, enabling him to cover ground on both ends of the floor exceptionally well. Lessort is also pretty explosive off two feet, being responsible for some highlight reel caliber finishes this season off pick and roll bounce passes or lobs, often through contact.

Lessort is scoring at a pretty nice rate this season, averaging almost 18 points per-40, and has been very efficient doing so, converting 63.5% of his 2-point attempts. He gets most of his touches via the offensive glass, running the floor in transition, and finishing off pick and rolls and cuts. A very physical player, he draws quite a few fouls, but has only converted 56% of his free throw attempts.

Not blessed with an extremely high skill-level, Lessort is a fairly limited offensive player overall, being more of an undersized center than a true 4/5. He is at his best executing simple moves and being spoon-fed by his guards, as his feel for the game is still work in progress. He doesn't have much of a back to the basket game, as his footwork is rudimentary and he lacks great touch on many of his short-range attempts, and he struggles to score from outside the paint, sporting a deep knee bend on his jumper that slows down his release significantly. He's also not a great passer, averaging two and a half times as many turnovers as assists on the year.

Where Lessort is likely to bring a team the most value in the short term is via his energy defensively and on the glass. He brings a high activity level, as well as excellent toughness, and can be quite a playmaker when combined with his strong physical tools, as evidenced by his 1.6 steals, 2.1 blocks and 12.6 rebounds per-40 minutes. He regularly beats opposing big men to the offensive glass with his length, quickness and ability to cover ground, and likes to throw his body around.

Lessort's quick feet and intensity level give him quite a bit of versatility guarding the pick and roll, where he can hedge and recover, switch onto smaller players, and still offer rim protection with his length. He's not afraid to mix it up inside, will step in for charges, is quick to get in the passing lanes, and shows the mobility to stay with power forwards.


Lessort has made significant strides defensively this season, something that was certainly not considered a major strength of his last year, partially due to the fact that he was on a Chalon team that put zero emphasis on that end of the floor. Still, there is work to be done to become a more disciplined, aware and fundamentally sound player.

Lessort can be overly aggressive at times, biting on fakes, giving up deep post position, losing his focus off the ball, and committing silly fouls. He's not immune to getting scored on by bigger players, and is just an average defensive rebounder, as he doesn't always find a body to box out, and does not have elite reach for a center.

Rim-running, high energy big men in Lessort's mold who rebound, finish above the rim and cover ground defensively are becoming increasingly popular in today's NBA, as players like Ed Davis and Tarik Black are demonstrating. His upside is limited to a certain extent by his lack of height, age, average skill-level and feel for the game, but considering his seemingly strong intangibles, excellent production in Europe this season, and solid track record of French prospects, it's easy to see an NBA team drafting him in the second round, possibly very early on. The fact that he has the flexibility to come over right away and play a role on a cheap contract, or be stashed in Europe for a year or two, only adds to his value.
Read full article

Weaknesses:
-Plays primarily at the 4 despite standing somewhere around 6-7
-Limited scorer
-Average ball-handler
-Struggles to make shots from perimeter

Outlook:
Lassort was born in September of 1995, which makes him a very young prospect still. He has terrific physical attributes but needs to improve his skill-level considerably.
Read full article