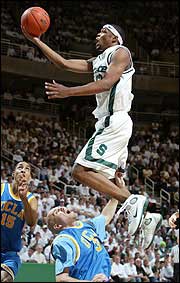 Strengths
When talking about all-around offensive threats at the wing position, Maurice Agers name has to come up near the top of the 2006 list. Ager is blessed with standout athleticism, an NBA-ready body, and explosive scoring ability. He has all the tools to succeed at the next level in a fast paced system.

Ager is at his best in the open court. Blessed with fantastic end to end speed, Ager is very difficult to contain on the break. He runs the floor relentlessly, and fills the lane for slashing, above the rim finishes. Ager is a downright spectacular athlete, and will regularly throw down highlight reel dunks.

As Agers game has progressed, he has become much more than just a leaper. After playing second fiddle to several upperclassmen and being slowed down by several nagging injuries early in his time at Michigan State, Ager really improved his overall skill level over his final two seasons.

Ager has a beautiful 3-point shot, with a quick release, nice elevation, and range well beyond the NBA arc. He has no trouble connecting with a hand in his face. Ager is a volume scorer, capable of getting hot and burying opponents with a barrage of long-distance bombs.

When he actually looks to attack the basket, Ager is dangerous in a number of ways. When going to his right, he can take defenders off the dribble. His explosiveness and wingspan allow him to get into the lane very quickly, and he is capable of slashing to the basket with ease once defenders start overplaying his shot. Ager has also shown a serviceable midrange game at times, capable of hitting turnaround fadeaways and midrange floaters.

Ager is blessed with all natural attributes to be a good defender at the NBA level. He is long, athletic, and is strong enough to compete physically with most professional wings.


Weaknesses
While Ager has the raw tools of a dominant all around scorer, there are plenty of times when you wouldnt realize it. Ager is overly dependent on his 3-point shot, and really struggles in the half court setting. He simply doesnt look to attack the basket or utilize his midrange game enough, particularly in terms of pulling up off the dribble.

While Ager is a solid ballhandler in the open court, he struggles going to his left. Slow the game down and take away his right hand, and Ager isnt nearly as effective. He just isnt as comfortable creating his own shot going to the basket as a player of his experience and athletic talent probably should be.

If he does miss his first few attempts from outside the arc, he can get very passive, floating around the outside and not really impacting the game at all beyond rushing another outside jumper every so often. In several of Michigan States midseason losses, Ager was completely nonexistent. His toughness, both physically and mentally, has been lacking at times.

When Ager isnt scoring, there isnt much else to his game. He doesnt rebound particularly well, and is a mediocre passer at best. He doesnt create well for others, and often dribbles with his head down to keep from turning it over. Overall consistency is an issue.

It would be nice to see Ager show a bit more effort and physicality on the defensive end. He should have provided Tom Izzo with a lock down defensive presence on the wing this season, but was clearly more focused on his offensive exploits. He just isnt very aggressive on that end of the floor.

Size is also a minor concern. While he was listed at 65 at Michigan State, many seem to think he could be shorter that. However, even if he is 64, Ager has athleticism to make up for it.

Competition
Ager impressed many with a solid showing in the NCAA Tournament his freshman year. He scored 16 points on 6-9 shooting in the first round against Florida, and followed that up with double digit efforts in the next two rounds. Averaged 6.7 pts in 17.1 minutes on the season.

Began to break out near the end of his junior season, averaging 18.2 ppg during Michigan State's NCAA Tournament run. The presence of three senior guards still forced him to share the spotlight a bit. Finished the season averaging 14.1 pts and 3.9 reb in 26.3 mpg, while shooting 47.6% from the field, 82.2% from the line, and 40.2% from beyond the arc.


Outlook
At this time Maurice Ager looks like a solid mid-late first round draft pick. His athletic ability is off the charts, but his all-around offensive game just isn't as advanced as you would like to see from a "first option" wing prospect. Ager will thrive in an up-tempo system in which he can get up and down the floor and spot up beyond the arc, but probably isn't going to do as well in a halfcourt-oriented style. Ager is far from a finished product, but should be able to develop into a very nice instant offense bench option at the very least.
Read full article

Landry Fields
@DraftExpress
After a scintillating start to the season, Maurice Ager didn't have the type of Big Ten season that many were expecting. Ager relied far too much on his outside shot, and rarely attacked the basket in the half-court. He possesses a decent midrange game, but rarely utilizes it the way he should. Ager struggles when he can't get up and down the court, and played poorly in games where teams were successful in slowing down the tempo. He picked up his production down the stretch, but some serious flaws had already been exposed.

Ager looked great against North Carolina in the Tournament a season ago, and could manage a repeat performance if the two teams do in fact meet in the second round. However, unless he can muster another "Gonzaga-esque" outing or two, Maurice Ager's stock is likely limited to the latter portion of the first round.
Read full article

Landry Fields
@DraftExpress
Ager could very well be the one player who raised his stock more than anyone here in Maui. The beat writers who vote for the All Big Ten team decided that Ager wasn't worthy of being mentioned, but DraftExpress disagreed with that notion and named him our preseason Big Ten conference player of the year, as well as the #1 NBA draft prospect in the conference. Ager certainly showed the country who was wrong on that one in Maui, carrying the Spartans offensively and defensively in all three games here and generally looking like a true NCAA star that is ready to bust out this year as one of the top players in the entire country. He showed terrific strength and athleticism time after time slashing to the basket, finishing alley-oops, blocking shots and doing a great job disrupting whoever he was guarding. His perimeter stroke was on all tournament long, knocking down three pointers from well beyond the arc with his feet set or off the dribble.

What scouts will be looking for as the season moves on is the most advanced skills that separate backup shooting guards from the true difference makers in the NBA, mainly in their off the dribble game. Ager will need to show progress in his ability to pull up off the dribble from mid-range rather than forcing his way to the basket predictably every time (he has a tendency to almost always go right). Showing better instincts by creating for others with his passing skills--slashing with his head up rather than glued to the rim-- and better recognition of what the defenses give him through his inside-outside game will make Ager a more complete player and likely a strong candidate for the lottery if he can maintain the consistent approach he showed in Maui.
Read full article