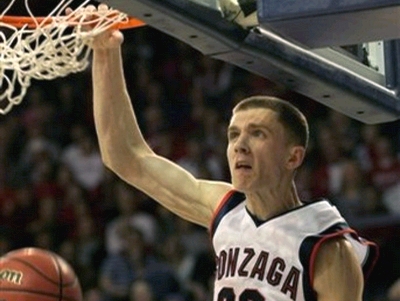 Jonathan Givony
@DraftExpress
-Relative to expectations, Micah Downs may have impressed us the most out of all the players we watched work out. Downs athleticism is very impressive to take in in person, and the ability he showed in terms of creating separation from his defender in the mid-range area really stands out. His terrific length allows him to cover a great deal of ground on his one-dribble pull-up, and he was shooting the ball really well in the drills we took in. He also jumps out of the gym and was responsible for some highlight reel caliber dunks after the workout was overnot a surprise considering his slam-dunk contest credentials. Hes probably going to look really good in most of the places he visits over the next month or so, and in our view, is probably a pretty good guy to roll the dice on somewhere in the second round, as he still has considerable upside.
Read full article

Joseph Treutlein
@DraftExpress
The former McDonalds All-American opened the PIT with a great defensive performance and maintained his intensity for the rest of the week, but only had an inconsistent series of games on the offensive end. Despite his lack of production, few players displayed the upside comparable to that of the former Kansas transfer. Though he has some major weaknesses that severely limit his ability to use his tools, Downs is a player worth keeping an eye on just in case he puts things together.

Most of the interest in Downs stems from his prototypical physical tools. Measuring in at a somewhat dubious 6-9 in shoes, with a 6-9 ½ wingspan, he has great size to play on the wing an asset that helped him immensely on both ends this week. He couples his size with excellent athleticism, possessing a physical profile that appears tailor-made for the NBA. While he could certainly stand to add some muscle to his slender (197 pound) frame, Downs looks the part of an NBA prospect.

During his time in Spokane, Downs threw down a handful of highlight reel dunks and made his fair share of big plays in transition, but he utilized his athleticism far more effectively than anticipated this week. Though hes always possessed the ideal tools to be a great defender, he did not always consistently show the dedication necessary to employ them. That wasnt the case in Portsmouth, as Downs came out on the first day and blocked four shots, created all kind of issues for his man in one-on-one situations, and didnt take a play off. Though Downs didnt have another game that was as statistically productive on the defensive end as his first, his intensity didnt waver. If this is something we can look forward to in the future, Downs has a bright future as a high-level stopper.

Though he showed progress in some areas, Downs struggled in others specifically, with his perimeter jumper. Mostly known for his catch and shoot ability on the collegiate level, Downs didnt shoot the ball exceptionally well this week, knocking down just 3 of his 12 attempts from beyond the arc, but displaying the same excellent form hes possessed since his high school days. Considering that he made 39% of his 3-pointers on the season, on a fairly decent amount of attempts, its pretty clear that he can shoot the ball. He didnt force anything or try to do too much either, which is not a surprise considering how much of a willing role player he was at Gonzaga, with his minuscule usage and turnover rates.

Downs was able to overcome his poor outside shooting by finishing a number of athletic plays at the rim by running the floor hard in transition, taking advantage of a couple of offensive rebounds, and throwing down a couple of alley-oops when his defender helped off him. This is indicative of the way Downs has scored in recent years, doing nearly all of his scoring from beyond the arc and right at the rim. Though he did some good things offensively, his biggest weakness was exposed repeatedly when he tried to get to the rim in half-court settings.

Downs is a poor ball-handler, and at this point, that is one of the few things holding him back from being a very serious threat to make a NBA roster. He appears capable with the ball in the open court, but he cant seem to maintain control when he puts the ball on the floor in half-court sets. Considering the fact that he has a solid first step, Downs would be well served to spend considerable time honing his ball-handling skills wherever he lands next season. His inability to create shots for himself on the perimeter and the difficulty he has maneuvering to the basket take away from his productivity, efficiency, and makes his mid-range game almost completely inept on the offensive end.

Though his weaknesses were very much evident, this was regardless a great week for Downs, as he gave NBA decision-makers a thorough reminder of how much upside he has. He has a number of great tools, and if he can bring the same intensity he showed on the defensive end at the PIT to practice every day to work on his ball-handling, he should have no trouble getting a look from a NBA team. Considering Downs has already earned himself a high-level look in Europe, it will be interesting to see whether or not he can round out the rest of his game to compliment all the other things he does well.
Read full article

Joey Whelan
@DraftExpress
Even though his play couldnt help Gonzaga survive their Sweet 16 matchup with North Carolina, Micah Downs has strung together an impressive streak of games over the last month. The former McDonalds All-American, who spent half a season at Kansas before deciding he wanted to transfer closer to home, closed the season playing the best basketball of his career. Possessing an intriguing blend of size, athleticism, and shooting ability, Downs certainly peaked at the right time, playing a key role in Gonzagas West Coast Championship run (he was named tournament MVP) and their three NCAA tournament contests. Though he is a borderline case to be drafted this summer, hes improved his stock and warrants mention here.

Standing 6-7 with a big wingspan, Downs possesses ideal size for a player that play multiple positions. He couples that size with very good speed in the open floor, nice leaping ability, and quick hands. Though he could definitely stand to add plenty of weight to his skinny frame, Downss physical profile is definitely a plus considering his position. Those tools, along with his ability to hit shots from the perimeter, have allowed him to be a solid role-player in Spokane from day one.

The best feature of Downss offensive repertoire has always been his pure three-point shooting stroke. He possesses great form and a quick release that allows him to be a highly effective catch and shoot player. Though hes able to hit shots at a very respectable rate with his feet set, Downs looks just as good when he elevates for shots coming off of screens moving full speed a testament to his tremendous perimeter footwork. While his ability to knock down shots from beyond the arc has become his calling-card (hes shot 11-27 from distance in March), his perimeter scoring ability has some notable flaws.

Downs struggles when hes effectively closed out, as he doesnt tend to jump straight up when hes shooting with a hand in his face a habit that hurts his efficiency considerably. According to Synergy Sports Technologys Quantified Player Report, his PPP drops from 1.41 when hes left wide open to catch and shoot to a meager .73 when hes defended.

The difficulties Downs has when hes well defended have been especially troubling this season. While he shows a nice first step and the ability to consistently create space to get his shot off, he doesnt prove to be a consistent shooter when he puts the ball on the floor, frequently shortening his release unnecessarily. Downss struggles from 2-point range this season stem from the fact that he gets in a rush when theres a hand in his face, which really hurts his ability to score as efficiently as his shooting form would allow.

Considering his solid first step, Downs seldom attacks the rim off the dribble preferring to go to his jumper once he finds daylight. His poor ball-handling skills and general one-dimensional nature is a major draw-back, but to his credit, he doesnt force the issue and sports an incredibly low turnover rate. An effective foul shooter, Downs doesnt get to the line at a very impressive rate. His frame does hold him back when he ventures inside, especially when he cant blow past his defender, but he proves more than capable of finding looks around the rim in other ways.

Since he isnt the focal point of Gonzagas offense, Downs finds other ways to help his team. His speed helps him make an impact in transition, and he crashes the glass well for a wing. A sound decision-maker, Downs moves the ball well on the perimeter and does a great job not making mistakes, but he isnt going to make his teammates better either, as his passing skills are just average. His basketball IQ does not appear to be off the charts..

Downss length and quickness give him some defensive upside and allow him to tip some passes and even block an occasional shot, but he shows questionable fundamentals when defending the perimeter. His tendency to lose sight of his man when helping over and the way he consistently lunges at shooters significantly diminishes his ability to use his tools when his man doesnt have the ball. Downs looks a bit better when hes forced to defend his man one-on-one, showing decent lateral quickness and staying active, managing to keep his man out of the lane with some consistency. Downss lack of physical strength is apparent when hes defending the ball, as he has a hard time preventing stockier guards from getting into the lane once they clear his shoulder. It remains to be seen whether he can effectively guard his position in the NBA, which is a major sticking point.

Given the fact that Downs hasnt been incredibly productive on the college level as a designated role-player, he needs to have a strong showing at the Portsmouth Invitational Tournament to improve his stock. Hes certainly a talented player, but his lack of bulk, lock down defensive ability, and the fact that he his clearest weaknesses coincide with his biggest strengths present concerns. His solid three-point shooting and athleticism will make him a player to keep an eye on, but considering his limitations, Downs has a lot of work to do still moving forward.
Read full article