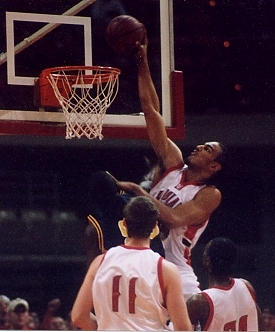 Landry Fields
@DraftExpress
Always with one eye on the happenings on the mid-major scene, we take a trip to a familiar destination that was good to us last year in our never ending search for the next diamond in the rough. Louisiana Lafayette is the team that current Boston Celtics rookie backup point guard Orien Greene caught our eye from last year and led us to declare him the sleeper of the draft. This year Lafayette boasts two more legit draft prospects in 6-5 combo guard Dwayne Mitchell and 6-10 big man Michael Southall. In a rare televised game on primetime television against a terrific Western Kentucky team, it was Southall who stepped up to the plate with 34 points to announce his reemergence on the NBA draft landscape.

Southall is a familiar name to draftniks. Initially committed to both Kentucky and Georgia Tech before and after encountering legal problems, he made the All Sun-Belt team in both his freshman and sophomore seasons at Louisiana Lafayette before declaring for the draft in 2003. Southall withdrew and later spent time in jail for violation his probation, being forced to sit out the next two seasons before finally returning to the Ragin Cajuns to get his college degree and play his senior year.

Despite the baggage and his age (we could not dig up a date of birth but our calculations say he is somewhere in the ballpark of 24 or so), Southall is a guy that the NBA will take a hard look at. His size is obviously intriguing, but hes also an excellent athlete who is quick off his feet as his 3.3 blocks per game will attest. Southall made a living in the paint against the Hilltoppers all game long sealing off his man, catching the ball with either hand and finishing time after time with an explosive dunk. He went to the line repeatedly and knocked down almost all of his free throws to boot. He showed a bit of range on his jump shot and even put the ball on the floor at times semi-effectively. Defensively he rotated well and showed the ability to get off the ground and block shots with either hand. Southall is a pretty skinny player and had some problems with his conditioning at the end of the game, struggling a bit on the glass after not boxing out and generally not showing great awareness for what was going on around him. His team is nowhere near as good as they were last year with Orien Greene and Tiras Wade, but you can never rule out a bunch of gifted athletes as the Lafayette puts on the floor in a lose or go home conference tournament that will send one team to the Big Dance. Southall is another player that should get invited to Portsmouth and has a chance to make some noise there with his size and athletic ability. He looks and plays a bit like a 6-11 version of Peter John Ramos, with the good and the bad that comes along with that.
Read full article