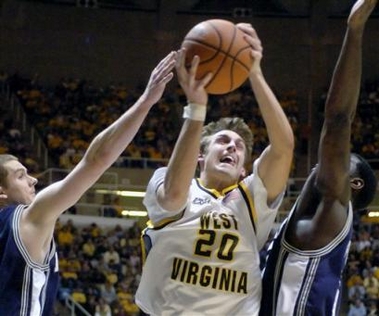 Strengths
Gansey is a basketball player in the truest sense. He has an
excellent basketball IQ, fitting seamlessly into any role and just
knows how to play the game.

Offensively, Gansey is outstanding running off curls to free himself up for open shots, helping him shoot an incredibly efficient 55% from the field. He moves extraordinarily well on offense and is constantly in motion making his matchup work extremely hard to defend him. Gansey knows how to use screens well and is very smart in the way he sets up defenders to run into them.

Much like his other West Virginia teammate Kevin Pittnosgle, Gansey can also stick it from the three-point line at a superb rate. Gansey shot 43% from behind the arc on the year on just under 6 attempts per game, but can also knock down shots equally well from mid-range. He has a quick release, deep range and excellent mechanics on his jump shot, and can also take and make his jump-shot under pressure. Combine his ability to shoot accurately with his ability to run around screens or curls and we are talking about a potentially dangerous weapon.

If the jump-shot is not available to him, Gansey will not force the issue and instead shows outstanding court vision finding the open man, being extremely patient and efficient in the way he reads defenses.

One of the most impressive parts about Ganseys game is that he is a very good rebounder on offense and defense. Despite his lack of size and great athletic ability, he gets rebounds from his ability to relentlessly go after the ball, even if that means putting his body in harm. Usually he gets to the ball quicker and faster than the opponents do because he anticipates very well and has the sheer desire to pull it down. Despite only being listed at 6-4 and possessing a pretty frail frame, Gansey led West Virginia in rebounding on the season.

Defensively, Gansey also does a great job anticipating and getting in the passing lanes, being pretty smart and pesky in this area and showing plenty of toughness.

Gansey is also a decent ball handler, not being a great shot-creator, but having the ability to bring the ball up court, slash to the basket when the lane is open or use the quick pull-up jumper from mid-range. Gansey catches defenses off guard when they try to deny his 3-point shot, taking his man off the dribble and making his way to the basket with moderate success if the opportunity is available for him. Despite his lack of ideal size, he is not afraid to go into the post by any means and can finish creatively around the rim.

What might be the most valuable part of Ganseys game is the fact that he is a very gritty basketball player. Gansey is a tough competitive kid on the court, not being afraid of contact, showing plenty of hustle and all the willingness in the world to take charges, hit the deck or scrap for a loose ball. Physically he is in good shape even though he is not an extremely gifted athlete, being able to play for long stretches without leaving the court.

His intangibles appear to be superb, whether its his calm demeanor on and off the floor, his outstanding feel for the game or his terrific work ethic and attitude.

In the clutch is when Gansey is truly at his best, as his ridiculous 19 points in just two overtime sessions in the 2005 NCAA tournament will attest. In the unlikely event that Gansey accomplishes nothing for the rest of his career, his place in basketball history is already secure with that one incredible performance. He's been very clutch in many other games too, but that outing will be a tough act to match.

Weaknesses
Gansey doesnt have many holes in his game, but the ones he does have are very significant.

One of the biggest areas of concern with Gansey is the fact that he is not the ideal height for an NBA shooting guard, being a little on the small side at 6-4, and showing very little potential to play the point. His frame is also very frail.

Another cause for concern is his lack of outstanding athletic ability. In the NBA two guards are usually extraordinary athletes, and that is something Mike Gansey simply is not even though he is likely a better athlete than you would think on first glance.

Gansey likely will have trouble creating shots for himself off the dribble, as his first step is not off the charts and he does not possess great strength. He only gets to the free throw line a little over 3 times a game already at the college level, and things will likely get much worse in the NBA, possibly restricting him to the role of a spot-up shooter. When he does get to the hoop, he could find problems finishing at the rim. Although he is a superb offensive player at the college level, there are major questions regarding whether hell be able to get his shot off in the NBA at his size because of his lack of size and athleticism. He is a bit one dimensional at times already, and not every team in the NBA is interested in having a guy they need to run so heavily off screens for catch and shoot jumpers. For someone that is such a good shooter with his excellent percentages from the field, you have to wonder why he didnt take even more shots when his team clearly needed him to. His unselfishness and efficiency is admirable, but many times this year his team needed him to step up and shoulder more of the offensive load and Gansey could not find a way to get to double figure shot attempts. In 15 of 33 games this year, Gansey made only 1 free throw or less, again making you wonder a bit about his somewhat passive nature.

One major question he will have to answer revolves around his potential to defend the type of athletic freaks we find at the 2-guard position in the NBA. In workouts and possibly the pre-draft camp he will have to show he can defend athletic guards on a consistent basis and not be a liability. He will have to justify being on the court on the offensive end by making a high percentage of his jump shots as well as providing hustle plays on both ends.

What you see is likely what you get with Mike Gansey at this point, as at age 23 as a fifth year senior he probably doesnt have a great upside to continue to improve.

Competition
Gansey has played up to the competition in the very deep Big East, having big games against big time competition. Even against some of the best defensive teams in the nation, Gansey found a way to produce and make shots. His most impressive game of the year might have been against UConn, scoring 25 points while shooting 10-13 from the field. Another tape that will likely be making the rounds is his performance against Marquette, where he scored 20 points in the first half on 6/7 shooting from behind the arc and ended up with 33 on the game on 11/14 from the field.

Outlook
With Ganseys excellent basketball IQ and knowledge of how to get open, come off screens and get his shot off, he should have a solid NBA career if he lands in the right situation. The fact that he seems to want it more than most other players he goes up against should bode well for him. Someone could fall in love with him somewhere late in the 1st round, especially if he has an impressive workout, but at this point he looks more likely to land somewhere in the 2nd round.

Joseph Treutlein
@DraftExpress
Gansey capped off a great senior year by once again being the stable presence for his team that he always is. He displayed a very nice shooting stroke that will aide him greatly at the next level, and his constant effort on the court was always of benefit to West Virginia. Gansey scored 5 points in the last 18 seconds to try and keep his team in the game, but in the end it wasnt enough. Throughout the game, he also made it to the hoop a number of times, and finished very well in the lane against the much more athletic opponents.

Though he wont wow anybody with his athleticism, Mike Gansey should be athletic enough to play at the next level, and his shooting would come in handy on a number of contending teams. He is also helped by the fact that he always hustles his heart out, and at least puts the effort in on the defensive end. With some good workouts, its hard not to envision Gansey as an early to mid second round pick. He wont be starting on any team in the NBA, but has the makings of a guy who can be a solid role player for years to come.
Read full article