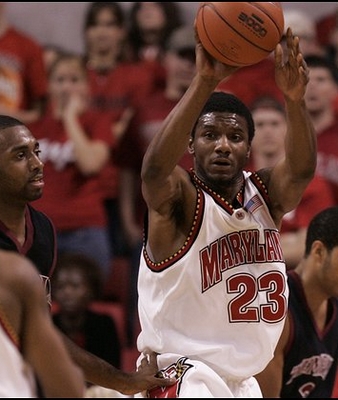 Joey Whelan
@DraftExpress
With a loss against Butler on Saturday, Joness collegiate career ended much the same way it started: anticipation followed by disappointment. With .6 seconds remaining and Maryland waiting to in-bound the basketball down by 3, Jones had a step on his defender and appeared to be in position to get a good shot off, only to have the pass bounce off his hands, ending the game. Jones, who had done so much to get Maryland back in the game after trailing, could only pull his jersey over his head in disappointment as the buzzer sounded.

The entire game was really a microcosm of Joness career, especially the last two seasons. He was very quiet in the first half, hitting just a pair of threes, and providing little other production on either end of the floor. His second three was an important one though, knocking it down to end the half and pull Maryland back within 6 points.

The second half was where we got to see Jones at the height of his potential. He is one of the streakiest players in the entire country, but when he is on, he is one of the deadliest outside shooters around. Jones promptly hit 3 of 4 threes in the first five minutes of the second half, sparking Maryland on a run that tied the ball game. He hit several other pull up jumpers off of screens, exploding for 15 quick second half points.

What was so impressive about Joness second half performance was that it involved more than just hitting jumpers. Jones suddenly became active inside, grabbing two offensive rebounds, and scoring on both second shot attempts. The second one was very impressive, as Jones skied over everyone to tap the ball back in.

This game did not change any opinions of Jones, as it has been his calling card since he came to Maryland. He is an inconsistent player, plain and simple. Some scouts may fain interest in him simply because of his athleticism and deadly outside shot, but even that comes and goes. Besides shooting, Jones doesnt do anything else well enough to contribute to a team at the next level, and many times even a college team. Jones certainly has the potential to play professional basketball, but unless he absolutely goes nuts at one of the pre-draft camps, it probably wont be in the NBA.
Read full article

Wojciech Malinowski
@DraftExpress
Marylands Mike Jones enters his final season of college basketball looking to finally live up to the lofty expectations that many had for him as an incoming freshman. The former McDonalds All American has been unable to show NBA scouts that he is anything more then a spot up sharpshooter, as virtually all other areas of his game have remained stagnant, possibly even regressing in some during his time at Maryland.

The Massachusetts native possesses all of the traits that NBA teams look for in a shooting specialist. He seemingly always finds the open areas of the floor to spot up at, and once he has the ball, gets it off in a hurry with picture perfect form. Jones is quite possibly the countrys most dangerous shooter when he is on. His range extends to 25 or 26 feet, where he has absolutely no problem launching from. The 2003 McDonalds All America Three Point Contest Champion has the ability to quickly knock in 4 or 5 three pointers in a short period of time, giving one the idea that he has the potential to eventually become a terrific weapon off the bench in the NBA one day. His shooting prowess does not end there however, as he is also virtually automatic from the free throw line, making 89.8% of his attempts last season.

Physically, Jones is just about everything you could ask for in a shooting guard. He combines solid size with a nice wingspan and good lateral quickness. To top it off, the Terrapin guard is incredibly explosive, and is a constant threat to dunk on opposing players in the open court.

These superior physical traits are also the same thing that frustrates fans, college coaches, and NBA scouts alike. Jones does not ever seem to use his athletic talents, instead choosing to settle for primarily outside jump shots every time he touches the ball. He does not even look to take the ball to the basket, so its only imaginable how good he could actually be if he put it all together.

There are many holes in Mikes game, however. To start things off, he is a bad decision maker, and is incredibly turnover prone. This could be attributed to his marginal ball handling skills, or the fact that he has basically turned himself into a one dimensional player on the court. As we mentioned before, Jones doesnt really do much off the dribble, rarely displaying a pull-up jumper or taking the ball all the way to the rim. Those deficiencies explain why the talented guard does not see the free throw line often, only getting approximately 1.5 attempts per game.

Defensively, it is incredibly frustrating watching Jones. He has all of the tools to be a good defender, but does not put any of them to use. The senior wing constantly lost focus last year, and clearly did not display consistent effort on the defensive end of the floor. We will see this year whether or not Mike chooses to put all his tools to use and can become a quality defender in the ACC.

As far as the NBA is concerned, Mike Jones can be in the NBA if Mike Jones wants to be in the NBA. The only thing holding him back is himself, and his desire, or lack thereof. It will be interesting to see if Jones finally puts it all together his senior year and gives himself a legitimate shot of being drafted, but if we look at how the last three years went, wed say the odds are against that happening. On the other hand, he can easily carve himself a niche if he can heat up in just a couple of workouts or one of the pre-draft camps, as its rare to find an athlete of his nature who can stroke the ball the way he can.
Read full article

At the Jordan Classic: Main Event and Regional Game Recaps

Joseph Treutlein
@DraftExpress
After having some troubles in the practice sessions leading up to the main event, Mike Jones put everything together for a solid performance Saturday night. Jones did have three turnovers in the game, though only one of them was really at his own fault, a traveling violation when he was forcing a drive. Otherwise, Jones played well, hitting some jumpers and getting some scores in transition. Jones has a smooth release on his shot, though he only hit one three-pointer in this game. He did have a pull-up mid-range jumper that he created space for with a crossover, though, and another open mid-range jumper off a teammates pass. The rest of Jones points came in transition, where he had a few jams and an impressive lay-up following a steal, where he took a lot of contact to draw the foul and still laid it in off the glass for the and-1. Jones had another steal that led to a breakaway in the game, but couldnt finish the lay-up on the particular attempt.

Jones should be able to contribute at the very least as a spot shooter next year at Syracuse. He should spend the summer working on his ball-handling and try to get more under control when penetrating into the lane, something that he had trouble with earlier in the practices.
Read full article

At the Jordan Classic: Friday Scrimmage

Joseph Treutlein
@DraftExpress
Mike Jones, Harriss soon-to-be teammate at Syracuse, had a decent offensive showing, but still had some bumps along the road. In Joness two days here, hes shown that hes not hesitant to pull the trigger from three, and today he was actually able to convert on some of those opportunities. Jones hit two out of six three-point attempts in the scrimmage, most of which were spotting up. Jones has yet to show he can effectively attack the basket, having trouble yesterday and traveling on his lone try today. He did make one nice bounce pass into the low post, though, and was the recipient of two alley-oop catches on the day.
Read full article