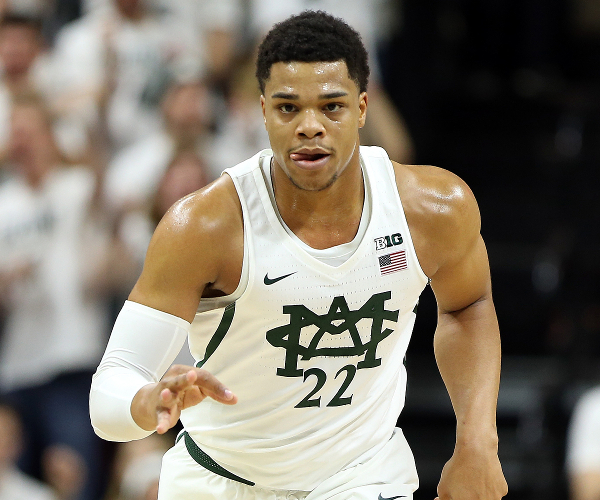 The two highly touted freshmen saw a number of possessions matched up with each other, leading to some very interesting take-aways for the NBA scouts in attendance.

Outlook Top-10 RSCI recruit who is expected to be among the leaders of this U18 squad, as well as an immediate impact freshman at Michigan State. Impressive athlete who has strong basketball instincts and plays with a high intensity level. Doesn't have great size, length or shooting ability, but has quite a few things going for him otherwise.
Read full article

DraftExpress
@DraftExpress
Miles Bridges, ranked as the 11th best prospect among the high school senior (2016) class by Scout.com, has elected to stay home rather than make his very first appearance at a USA Basketball event. Bridges will instead make his college announcement in front of family and local media in Flint, where he is widely expected to announce his commitment to hometown Michigan State. Many here question whether Bridges could have held his announcement ceremony either in Colorado Springs in front of the horde of national media, or on any other given date other than this one, especially since he is likely to cost himself an invite to both the Nike Hoop Summit and USA Basketball's U18 roster. Bridges' family did not respond to a text message requesting comment.

Another player who declined his invite is Marvin Bagley, who is considered by many to be the #1 player in the class of 2018 (sophomores), even though age-wise, he should be in the junior (2017) class. High school junior Charles O'Bannon also informed USA Basketball very early on that he's unable to attend.

Reid's high school coach Dave Boff of Roselle Catholic, in response to inquiries about his player's withdrawal, had the following to say: Nazi was very excited for the opportunity to go to USA Basketball. This coming week he has a few tests and a project due Monday. He made the decision to put his academics first. He's disappointed, but I'm proud of him for prioritizing his academics. He looks forward to going back to USA this spring."
."
Attempts to reach Simmons for comment were unsuccessful.

Speaking broadly on the topic of players who decline invites to various training and mini-camps, USA Basketball National Team Director Sean Ford did not appear overly concerned about any given absence.

Unfortunately, kids have a lot of different commitments and things to focus on. From our standpoint, we don't spend much time figuring out why guys aren't here. If someone says he's not coming, you're never changing his mind in our experience. Maybe he is focused on recruiting, a school conflict, or his support group feels this is not the right place for him to be. Because of the deep player pool in the US, we are lucky that it's not something we have to spend time worrying about too much at this time.
Read full article

Bridges had an impressive four-game tournament, filled with highlight dunks, rebounds, blocks, steals and overall efficient play. The Detroit native and combo forward has had a tendency to play outside of himself at times in the past, but at Nike Global Challenge he did a nice job playing to his strengths (for the most part) and it showed statistically. Bridges averaged 24.5 points, 14.5 rebounds, 3.0 assists, 2.6 turnovers, 1.9 steals and 2.2 blocks per 40 minutes pace adjusted while shooting an outrageous 73.7% from inside the arc.

Bridges punched home what seemed like at least 10 thunderous dunks over the course of the four-game tournament, which played a big part in his high field goal percentage. Despite a fairly thick frame, Bridges is a big-time leaper (mostly off of two feet, however) who thrives in transition, catches lobs in pick and roll and can be a nightmare on the offensive glass when motivated.

Bridges also has impressive body control when he attacks off the bounce and can more or less get wherever he wants on the floor thanks to his combination of strength and explosiveness.

While his ball skills have improved, Bridges still has the skill set of a face-up four/hybrid forward than a straight three. He's not overly advanced with the ball in the half court, struggles to make shots from the perimeter (1-of-9 from three with loose mechanics), and isn't the most comfortable passer on the move or versus pressure.

Bridges is steadily improving in all of those areas, but his success at the college level will most likely come as a mismatch power forward given his ability to finish above the rim inside, rebound, and defend bigs.

On the defensive end, Bridges plays much bigger (and longer) than his measurements thanks to his quick and explosive leaping. While he's more vertically explosive than he is quick twitch laterally, he's constantly altering shots both as an on ball defender and weak side defender. Bridges played with good energy defensively and was flying all over the defensive glass.

From a mental standpoint, Bridges does have a tendency to get a bit too emotional, showing less than stellar body language on misses or negative plays. In addition to his maturity level, Bridges also still has to improve his handle, shooting ability, and feel for the game to be able to play the three full time, but for the time being he'll be an absolute nightmare of a matchup as a four at the college level while he continues to develop the skill set to match his excellent combination of strength and leaping ability.
Read full article